Yesterday, I had the pleasure of participating in the Outrun 24 hour Trail Run in Kirtland, Ohio. I started the run with no real expectations-- just to run for as long as it "made sense", and with a loose plan to run the first 13-15 miles, and then implement a 5 minute walk rule, first after 2 loops and then after each loop. After actually running the mile loop, however, I realized this was going to have to be altered, particularly when I encountered the hill.

From the time the start sounded and I set out onto the course, I knew I wasn't going to be starting with 9-9:15 miles. I quickly found out that the "crushed limestone" was closer to sand, and that there were bits of gravel on other parts of the mile loop. I didn't mind these things-- I was actually relieved they were there, since they added a little more personality to the loop, the reason I prefer trails to roads. The terrain fell nicely in the middle of these. However, because of this, what felt like a 9 minute pace was actually closer to 10 minutes.

The first hour was incredible. I remember thinking to myself on the second mile, when I split from a group who were moving a little slower than I was comfortable running, "man, this feels great! I haven't felt this good since Mill Creek in 2010!" I ran the first seven miles with Melissa Terwilliger who ended up winning the event with 111 miles, before I stopped for food.

I plowed on, mile after mile of running the flat and downhill portions, walking up the course's lone hill for hours. This part of the race, hours 2-6, carried on so similarly that it's difficult to discuss individual portions because I wouldn't be able to tell you whether I was on mile 14 or 28 when the incident occurred! And, because I was walking the hill every mile, my overall pace at 50k was slower than Green Jewel last month (I reached 50k in 6:08:30), but I wasn't worried about it since I knew I still had hours and hours ahead of me. As long as I was still running, I felt good. That was my objective: keep going until it doesn't feel good anymore. This was a training run, not a traditional race.

After about the seventh hour, I slowed down to walking about 1/3 of the mile, running 2/3 and consequentially my pace slowed. Because I wasn't wearing a watch, it was difficult to stick to a 5 minute walking schedule, so I  just walked for what "felt" like 5 minutes, which turned out to be the portion of the course after the first set of orange cones until I'd gotten to the bottom of the first and steeper downhill section. I was able to keep this up for an hour and a half. 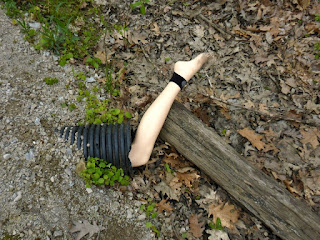 This was a silly "tradition" during the race. People took turns running with the leg (complete with a timing chip) and would then hide it somewhere along the course for the next person to find. I ran with it on my 37th mile!)


By 8.5 hours, however, my knees had become so sore that I was struggling badly on the hill and, based on my history of knee problems, I began to consider stopping for the sake of sparing myself another 10-12 weeks of recovery by which time I'd have missed Mohican, and basically put myself "out" of Burning River-- the reason I registered for this run in the first place!  Ten hours became my goal. I pressed on. Secretly, I wanted to at least reach the 50 mile mark, which I assumed would bring me closer to 11 hours. I juggled the pro's and con's for the next hour and a half. 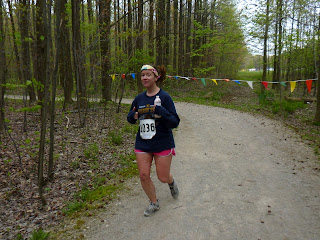 By the 45th mile, it was apparent that I was preparing to start a death march, which meant I would be almost exclusively walking. I wasn't comfortable doing this. Granted, I'd walked 45 hills already, so walking was clearly an integral part of my altered race plan, but walking was not helping my knees enough to make it worth continuing. I finished one more loop, and then called it a day.

This decision was met with a lot of shock. I was 10 hours into the race, 4 miles from hitting the 50 mile mark, and apparently in 4th place. A number of people, including my sister and husband, suggested that I sit for an hour, and then go back out. Even the guy working in the timing tent suggested I take off my timing chip, walk around a bit, and then perhaps go back out. I kept hearing, "you were flying!" It just didn't seem worth the risk.

Did I "wimp out"? I don't think so. "Why stop at 46 and not 50?", I was asked several times. Had I continued, I'd have reached 50 miles in about 11 hours. I could have done this. However, I also could have found myself injured again, all for the sake of reaching 50 miles in a training run. I had no obligation, only goals. I also made an agreement with myself that once I'd reached a point where I was walking more than running, it was time to stop. I had walked the entire 46th mile.

After finishing (official time: 10:11:53), I spent some time talking to my good friend George Themelis who had come out to support me during the last few miles and to take some photos. We both agreed that I'd made the right decision by stopping while I was ahead, especially with the Mohican 50 only 6 weeks away, the second most important race I will be running this year behind the Burning River 100.

It is interesting to note that my nutrition plan for the race worked out fabulously, except that I did not bring enough. On my menu: lots of ham and cheese (bread was a no-go), a peanut butter Lara bar (the highest in protein, lowest in sugar/carbs this brand offers), a few orange slices, and plenty of broth from Ramen (thanks to the O24 crew). I did not drink any sports drink/mix, although I did add Nuun tablets to my water starting at about 27 miles to keep up my salt/potassium levels. I also had 4 E caps, 2 pb&j squares, and 2 advil post-run. That's it! Throughout the 10 hours that I ran, I only consumed about 1200 calories and fewer grams of carbs than most non-runners consume in an entire day. I had, for the first time in the history of running half marathon or more, absolutely NO digestive problems. I did not "bonk". There was no high sugar/carb level to maintain, so it couldn't bottom out! For those out there who are weary of low-carb and calorie ultra running, I think this shows that it absolutely can be done. I feel amazing today. 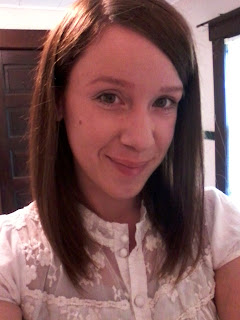 Posted by Kimberly Durst at 8:33 AM