If you've ever been awakened, laying in the back seat of your car in your underwear listening to Mozart, by the blinding light of a police officer's flashlight and not-so-gentle banging on your window, then you understand and appreciate my Friday night plight. But, I'm willing to guess that the vast majority of the general population has never been exposed to this sort of comical humiliation, so I'll let you in on a little secret: it's no picnic, especially when the officer begins peering into the backseat while you scurry to cover yourself a little better, asking suspiciously if you're alone. I wanted badly to say, "I'm listening to Mozart and there's two tons of camping supplies in the trunk. Yes, I've got a couple men hanging out back here." Instead, I explained that there was a race starting at 5:00 in the morning, and I was hoping to sleep for a couple hours before it started. Leaving me to the debauchery of my underwear-clad Mozart-listening backseat shenanigans, I decided I should at least turn off the engine so I didn't wake up with an empty gas tank. Instead, I woke up with a dead battery...because I'd left my phone plugged into the charger, and somehow it had taken down an entire automobile. 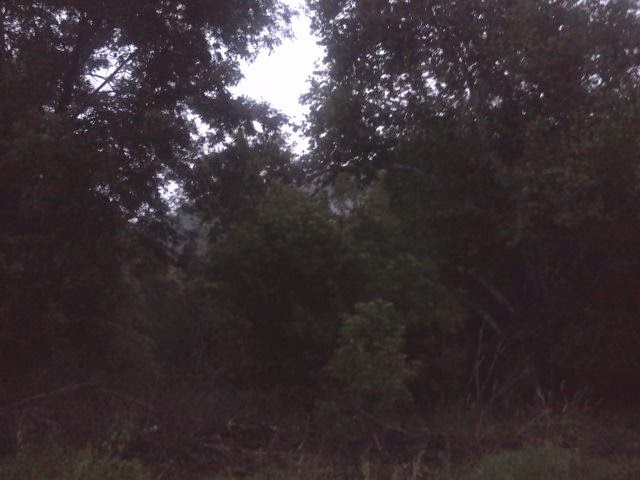 the view from my car, where I slept the night before the race

The day was off to a great start.

On the bright side, once the 50 mile race was underway, I discovered I felt better than I could remember feeling, even into the double digit miles. I can be quoted as saying that nature is my god, trails are my sanctuary, and I have the privilege of attending my church for 6, 10, 15+ hours sometimes. Mohican was my grand experience, my conversion, and over the past two years my affair with trail running has blossomed exponentially. Returning to the place where it all began was a special occasion, and, coincidentally also the pinnacle of my 2014 training for my one and only 100 mile race of the year. I'd hit a peak of 84 miles the week before the Buckeye Buster 52 mile trail race which I'd finished in 12:39:05, and with only two weeks separating that race from this one, I had little reaction or recovery time. After taking a day off, I was back on the saddle. The immediate transition from grueling, long trail race back to training was intense. But, I attribute what has transpired since April to this sort of attitude toward training: I just want to knock out this 100. It's a mission. And, I'm focused.

Anyway, the beauty of the Mohican trail is breathtaking, and I was into the Enchanted Valley-- a section of rocks, creeks, and a legendary root climb, with fire in my step and camera in hand. Even though the low light resulted in a lot of blurry pictures, it was worth losing a couple minutes trying to capture a still frame of what I was experiencing during my adventure through this part of the course. The Mohican 50 consists of two loops: a long loop that is approximately 26.5 miles, and a shortened version of this loop that is roughly 23.5 miles; and, the short loop cuts out this lovely section of the course. Upon ascending the root climb at the climax of the Valley, I was back onto the trail and headed toward the aid station. I felt great. 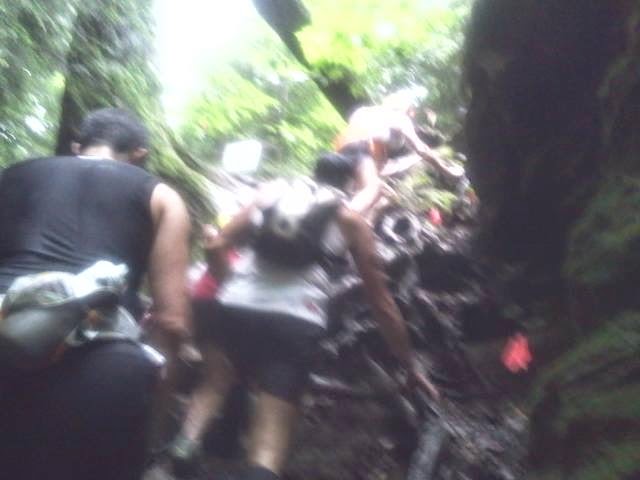 the root climb leading out of the Enchanted Valley

The humidity that abruptly ceased as I exited the trail had been the only setback thus far, as temperatures never seemed to climb above the mid-70's. It was pleasantly warm with plenty of shade, but the humidity was like a thick, overwhelming fog that was causing me to sweat more than I'd like to admit, and I was chafing in places where a person should never chafe in addition to blasting through the water in my handheld bottle faster than I could have imagined. While I hadn't run out, and didn't, I came awfully close several times. Coasting past the Mohican Adventures campground, I sucked down the last of my bottle only to realize that the aid station was actually a half mile down the road this year!

I ran the first loop probably much faster than I should have run it, but I felt good and do not really regret the 5:31 split. In retrospect, I think if I'd have been able to reconcile the need to run faster with the shorter mileage that remained, I probably could have shaved a few minutes from my finish time. I also lost a lot of time waiting to go to the bathroom, but despite my underwear-bearing backseat meeting with Unknown Officer A the night before, I really didn't feel up to exposing my rear end to all and sundry on the trail.

I slowed considerably during the second loop, but kept moving steadily, and faster than I'd done during the last 20 miles at the previous race. While I'd lost my top 5 position when Lauren Pearch passed me around the 26 mile mark, I was still focused on beating my past Mohican 50 time by an hour, which meant I'd need to be done in 11:42 or better. It was a challenge keeping this in perspective with so many miles remaining, knowing how quickly things can change in such a long trail race. To stay motivated, I focused on rewarding myself with a walk when I approached a hill, and then I'd reward myself with a run when I got to the top. It sounds ridiculous, but each served as a welcomed break after a while. By the time I got to the Covered Bridge aid station at 38 miles, I was gassed and impatient. I knew I had 12 miles remaining, and this is where the calculations began. I almost wished I hadn't carried my phone, since it served as a continuous torture, each mile marker resulting in another quick check followed by an endless string of calculations. It got so bad that I could have sworn I was going to vomit numbers.

Unfortunately, it was apparent by mile 48 that I wasn't going to beat 11:42, but I was still reasonably confident that, barring a horrendous bone-breaking fall, sudden onslaught of diarrhea, or some other catastrophic mishap, I was going to finish under 12 hours. A couple of men, perched like vultures on the side of the course near the campground reaffirmed this, shouting something along the lines of, "you're a mile away and you're about to finish under 12 hours! Smile-- that's pretty impressive!" I couldn't smile, though, because I had no idea if there really was just a mile or if it was actually a mile and a half; and, my running pace was so mind-bogglingly slow that I was convinced most people could walk faster. I had no idea if I was moving at a 10 minute pace or 20, or if time had bent entirely. I just wanted to get done.

The finish is a cruel play on emotions that are barely intact at this stage in the race, forcing runners to actually pass the finish line on the opposite side of the street, run down a hill and over a creek before turning to run past, yet again, the finish line to do a lap around the grass behind the main pavilion at the finish. Finally, bounding as gracelessly as a rhinoceros, I heaved myself over the finish line after glancing at the clock: 11:50:13. It was done. 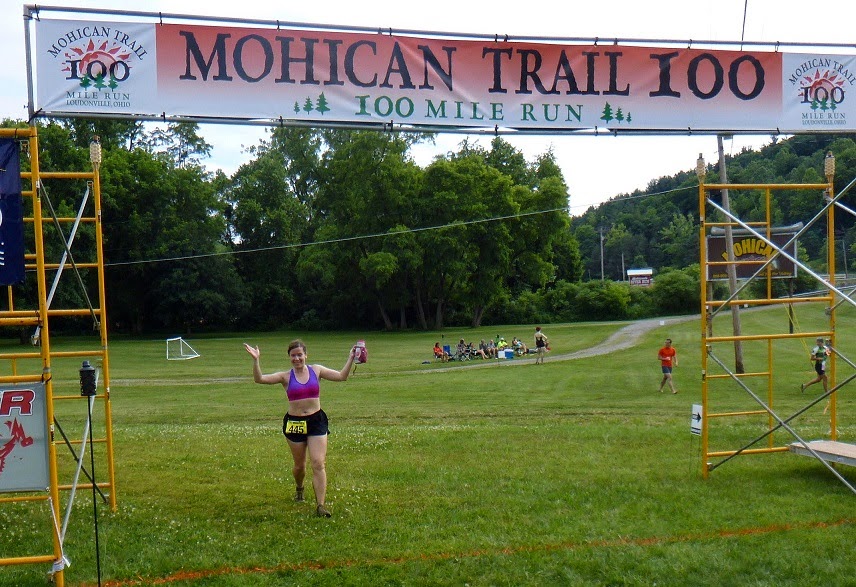 Today, aside from a bit of tenderness in my left ankle and some mild soreness in my quads, I'm walking as though I'm recovering from a typical long run. It is amazing how the body adapts to repeat torture. Sometimes I think I'd have been a prime candidate for a psychological experiment on the brain's remarkable ability to cope with physical and mental stress. Two years ago, I was so devastated by the fatigue my muscles and mind were experiencing that I walked nearly all of the second loop. This time around, I ran most of it, and finished 52 minutes faster, even with the outrageously long 8 minute stop at the Mohican Adventures aid station after I finished the first loop.

After having my car jumped followed by an eating rampage that took out anything and everything edible within arm's reach, I made the 2-hour drive home. I feel good. I feel optimistic. There are 6 weeks until the Burning River 100, and I feel more than ever that there is another buckle in sight, and an epic adventure waiting in the wings. As I told the two vultures who predicted my sub-12 finish, "no matter how many times I do this, it doesn't get any easier", but the familiarity with what awaits me and the exhilaration of seeing the finish line come into view makes it feel more possible with each attempt. I think that's what it's all about, after all. Just as some look to celestial beings to find their way, I lose who I was and emerge anew every time I take on a trail adventure. It's a passion. 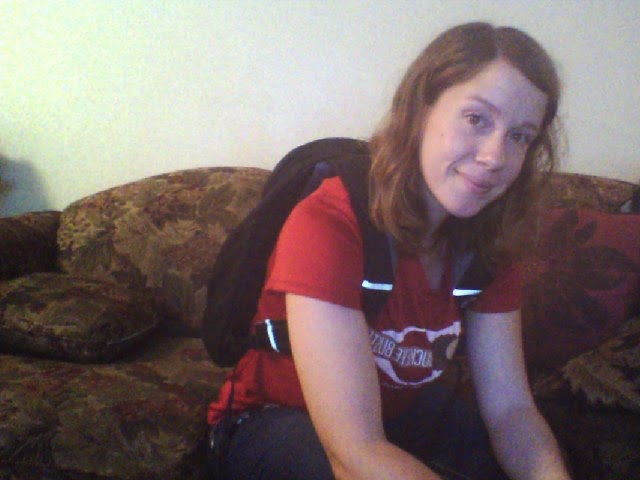