It's a moment of panic, really, standing at the starting line like a deer in headlights, not knowing what you're going to do. Even worse, standing there without wearing socks or underwear, even though you know you're going to be running in the mud and humidity for 6 hours or longer. I guess I made up for it by wearing two sports bras and an orange hair ribbon. And, I did have water this time...it was just old water that had been in an unwashed bottle for nearly a week.

The projected top 10 lists had been released earlier in the week, lists to which I typically do not pay too much mind in a really personal way. I mean, if it were a local 5k top 10, you'd better bet your ass I'd expect to see my name near the top. But, I haven't really found my niche yet on the mantel of speedy ultra personalities, so I tend to view these lists the way I view an article outlining an upcoming super race like Western States or Leadville. This time, though, it was different. I wanted to finish in the top 10. I just didn't particularly feel like racing.

This was the Buckeye Trail 50k: a trail ultra with a history more than two decades deep, and legends like Stephen Godale who had been there every step of the way. The course consisted of a 25k out-and-back stretch that followed a significant portion of the upcoming Burning River 100 course between Snowville and Pine Lane, some of the worst segments of BR100 in my own humble opinion-- at least in terms of steep climbs and mud. This was home, after all, to the notorious Bog of Despair. I'd run it once before, and recorded a personal worst 50k time; and, though I knew I was much better trained this year, and healthier, I was tired. In the 5 weeks leading up to the BT50k I'd already raced two very challenging 50 mile races, had logged my highest weekly training mileage to date with 90 miles, and had run 40 overnight miles the weekend before. My body was begging for a break. I told myself that break was coming. I just had to get through these 31 miles first.

I started slow, and even considered walking up the first paved incline, much like I'd done at the Tussey Mountainback 50 back in October. My early walking had paid off big time in that race, as I spent most of the last 10 miles picking off runners who'd flown by me in the early miles. My Cliff Young shuffle broke into a wider gaited trot and eventually a gallop as the miles progressed, passing first the Snowville aid station, and then Boston Store. I paid little mind to those who'd passed me, particularly those runners I didn't recognize, expecting their overzealous pace to catch them later when the race actually began. It's a lesson I learned, a lesson most of us learn the hard way. Banking time simply doesn't really work, at least not in a way that is beneficial to one's morale in those late miles when we're all looking for that silver lining and instead find ourselves being passed by droves of fresh-pacing runners. 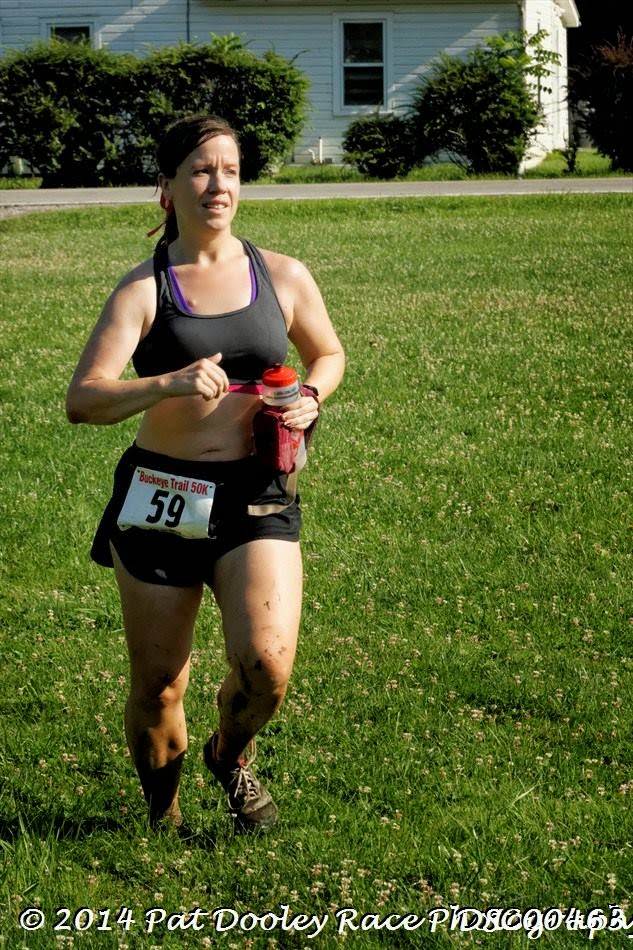 My friend Andy and I leap frogged for the better part of the Boston to Pine Lane segment. We rolled into the aid station together at the halfway mark in 2:54 and change, but I was out again as fast as I could feasibly get out, stuffing ice cubes down my bra (and joking with my Running Ma Dawn Drasner, "yes, I have ice cubes. Since when are my boobs this big?") and jamming 1/2 of a banana into my mouth. I'd been hydrating well despite the heat, and managing my water ration well, having not come closer than a few gulps from an empty bottle. I'd decided during the previous segment that my legs were in much better condition than I'd anticipated before the start, and I was going to hit the 'Go' switch in a few miles. The leading women weren't tremendously far ahead, and I'd encountered the leading male runner well into the Boston to Pine Lane segment, which meant the head of the field was feeling the effects of the heat, humidity and mud. I had a fighting chance at walking away with a pretty good race under my belt.

Pine Lane to Boston II was a blur. I was running fast and feeling fine, and had been repeating periodically a mantra, sometimes in my head and sometimes out loud: "once you get to Boston, there's only one more aid station". I wasn't cramping or wilting in the heat, but the overall fatigue from the previous weeks was making me impatient to get done. The towpath leading to Boston Store came into view before I knew it, and with 11 miles to go, I was prepared for the worst 5 mile segment of the entire race. Epic climbs. Mud galore. Creeks. Ugly, yucky stuff, especially after 20 miles. I set out for Snowville, my only goal being to reach it before the 5 hour mark. If I did this, even if a rogue boulder rolled out in front of me, a large barking dog chased me up a tree, or some other act of the divine intervened, I would still make it well under 6:30, and hopefully closer to 6:15.

I started encountering burned-out, tired runners a mile or so into this segment. A couple of them attempted to jog when I caught up, but most simply stepped off the trail, looking spent and defeated. I was admittedly feeling a little more tired and anxious as the twists, turns, ascents and descents progressed, wondering impatiently when those familiar, final hills were going to come into view. Up to this point, I'd only checked the time once: the 25k mark at Pine Lane, but now I was checking it every couple minutes. Finally, the steps came into view, and I knew I was about 1/8 mile from the aid station. 4:58. Six miles were all that separated me now from the finish line, but they were going to be the six longest miles of my life, it seemed. 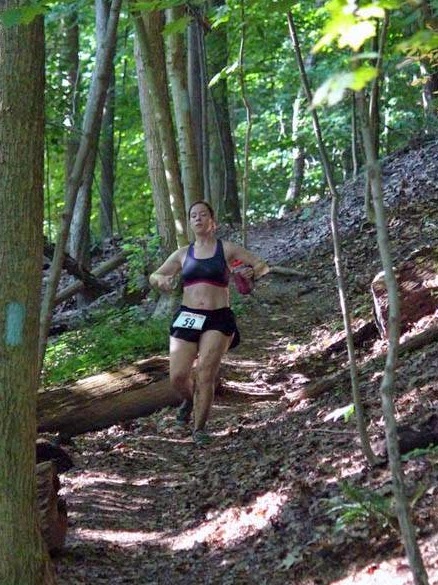 After I filled my water bottle, I took off running. This was my least traveled segment, one I'd rarely seen in training, and one without any real landmarks until I reached the stables near Oak Grove. Unfamiliar miles seem shorter when I'm fresh, and longer when I'm tired, and I admittedly hit a mental wall around 29 miles after which the thought of running was agonizing, but an agonizing necessity. It was here that another friend, Crystal Shinosky, finally took off after having followed or closely led me for nearly 2 miles, and after which I finally passed the stables, knowing I was less than 2 miles from the finish line.

My pace was steady, and a quick check indicated 5:58 had passed. Well, clearly I wouldn't be breaking 6 hours today, but 6:20 was looking awfully good. Looking over my shoulder, I realized nobody was in sight, and briefly I toyed with taking a walk break. But, running downhill on the pavement, I simply could not justify it, especially with a struggling runner walking just 100 yards or so in front of me. I picked up the pace, passed the runner, and, laborious, deliberate breathing pattern enforced and arms pumping like I was executing an exaggerated pantomime of an Olympic sprint, I made my way down the final stretch. My time: 6:21:32. I finished 10th. (Take that, top 10 projection!)

I laid in the cold grass under a tree in fetal position, unable to eat or drink and unwilling to move. It was a great race, and I felt great about it. With three weeks until the big day, I hadn't had a bad race in months. I'd survived the brunt of my hard training, had survived three brutal ultras in 5 weeks, had nearly a half dozen PRs or course PRs under my belt since late April in distances ranging from half marathon to 100k. I couldn't have hoped for better training. And now, it was over. My taper was finally going to begin.

I've given a lot of thought to Burning River. There is a chance I might be paced by one of the legendary ladies of NE Ohio ultra running, and with all that has transpired over the past 3 months, I'm not sure what is waiting around the corner at this epic, grueling race. Is 24 hours possible? I don't know. But, I'm going to give it my best shot.