Doing the Greens (Moebius-Green 50k and Green Cathedral Half Marathon)

"Only 9 miles", I was trying to convince myself, trucking my way uphill like a snowplow with a flat tire. "just think about Burning River at 91 miles".

Well, so that wasn't the best example.

At 91 miles at Burning River, I was gagging potatoes onto the ground and crying.

I was sweating profusely, despite the sub-50 degree temp and the fact that I was less than 35 minutes into the race. I'd made the colossal mistake of wearing long sleeves, and with only a couple water stops during the entire 13.1 mile race, I was dying. A mile later, a guy ran up beside me and congratulated me on my pace. "Wow, just a little over 8 minute pace. That's pretty impressive!" he said, before taking off on me. "Let's go get this guy up ahead". I'm sure he was just trying to be nice, but I can't help but think he was probably more impressed that a rear end the size of a Volkswagon was ahead of him than he was my actual pace, which really, if you think about it, wasn't all that impressive. I mean, I've seen photos taken of me from behind. 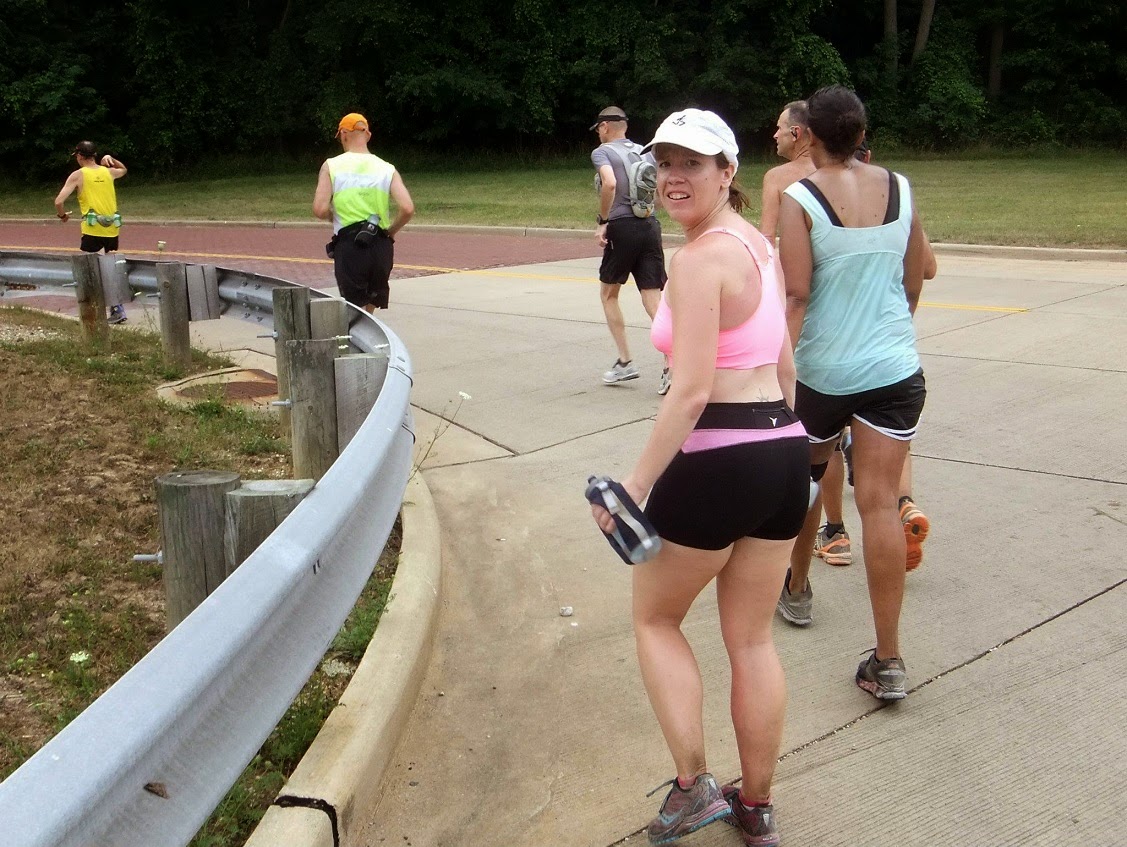 Three weeks earlier, I'd pulled off a small miracle when I finished the Moebius-Green Monster Trail 50k in 5:54:05 after using the three weeks post-BR100 to basically eat, make ambitious training goals I didn't really intend to keep, and otherwise backslide. It wasn't a personal best, but it wasn't bad either, and only the second time I'd finished a trail 50k under 6:00. Fast forward three weeks, and the eating had gotten worse, and furthermore, I'd sunken beyond the point of even making ambitious goals. Quite simply, I'd gotten lazy and 6 pounds heavier. And, that was on a good day.

By the 6th mile, I knew there was no way I was going to keep up the kind of pace I'd run at Akron two years ago, a pace that was 10 seconds slower than Cleveland, but felt now like a 10k effort. I passed a man who was doing the annoying 'walk until someone catches up, then run like a bat out of hell' thing; his run walk only worked until we got to a lengthy hill. Here, passing the 7 mile mark, I was anguished: barely over halfway, and legs seizing.

At this point, I started glancing over my shoulder, wondering when the other female runners were going to start catching me. How I'd managed to stay in 6th place for so long was, frankly, astounding. I'd played a similar game at Moebius, except that I'd built such a wide gap during the first 12.5 miles that once the slowdown commenced, I was over 10 minutes ahead of all but the two women who then passed me. 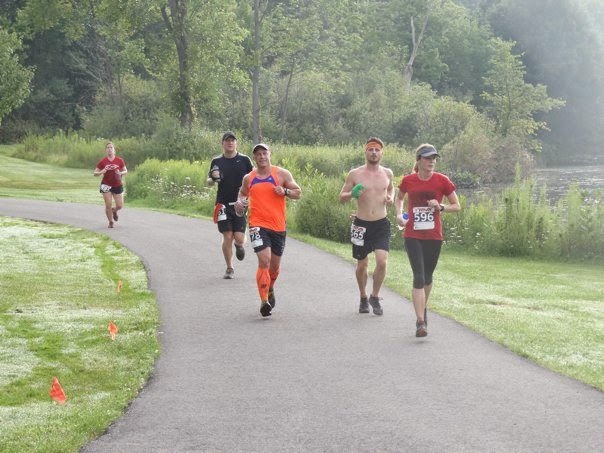 Moebius-Green Monster trail 50k- 12.4 miles after having been passed by the first of two women who would finish ahead of me (I am in the back of this pack)

I continued to lumber along. The 7th and 8th miles passed surprisingly fast despite feeling so tired. The 9th mile marker came into view, however, after trekking uphill and around a corner. It was here that I noticed a woman was running in the pack of men that were honing me in like a pack of wolves. I walked through the aid station, not because I felt particularly defeated (I'd had no real illusion of a fantastical finish), but because I was overheated like a car and on the verge of implosion. Approximately 1/8 into mile 10, the woman caught me. She was running very strong, and very briefly I tried to surge to keep up with her. It was a futile attempt. Soon, she was completely out of view.

The group of men, on the other hand, weren't running quite so aggressively, it seemed. It took another 2-3 minutes before they'd caught me, and didn't seem to be in much of a hurry to pass. Or, perhaps, I was moving a little faster as we were traveling on a relatively flat section and my legs were less fatigued. "What is our pace?" I remember asking, to which one of the three men replied, "8:15-- but don't let us hold you back. We're just trying to break 1:50". Well, we wanted the same thing, then. I was loosely determined to keep up with them, but knew it probably wasn't going to happen. They'd come from behind, which meant they'd gained ground on me. That also meant I was slowing down. I'd been averaging 8:10 at 5 miles, and now, 4 miles later, I was averaging 8:15. At this rate, I'd probably be pacing 8:20 or worse by the time the finish line came into view. Finishing under 1:50 wasn't going to be a cinch. Of course, I knew that all along.

I managed to keep up with the men through mile 11. They gained some ground on me at the last aid station, and then more on a rather steep hill. How anyone could have charged that hill was one of life's mysteries. Yet, it seemed like everyone was charging it but me. Approaching the 12 mile mark, they were still in view, albeit with a sizeable gap of probably 45 seconds or more. Here, a second woman caught me. Interestingly, she began to mimic my pace, even walking up the first of two large hills alongside me. I asked her for our total time, to which she responded, completely out of breath, "1:41". I began wondering if I was even going to beat 1:51, walking up a hill like this. But, my legs were like lead weights and my lungs were on fire. At the top of the hill, this woman started to move ahead. And then, as we began our ascent up the second big hill, she began to move even faster. I didn't.

As I neared the top of the hill, a third woman passed me, running like it was an Olympic sprint. I knew we were almost done, but I just didn't feel like I had anything left. I forced myself to at least pick up a jog, seeing the mile 13 marker. There was no way I was going to finish any race, much less a half marathon, walking-- even one with an uphill finish like this one. The clock was still ticking in the mid-1:49's as it came into view, and I saw the lady who'd given me the time finish well under 1:50. Briefly, I thought maybe I might be able to eek out a sub-1:50, but I simply wasn't moving fast enough. 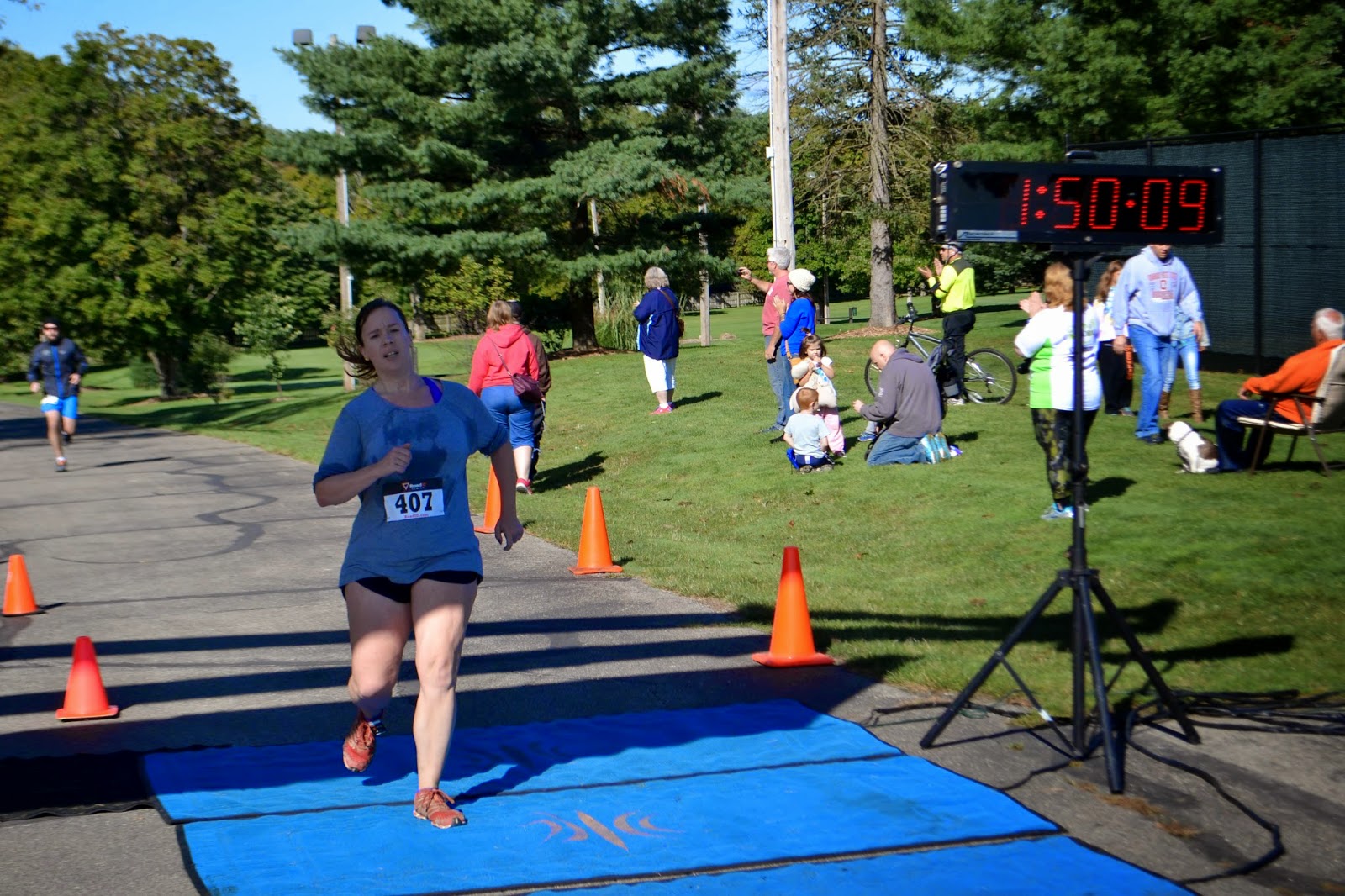 So, no records were broken at the Green Cathedral half marathon. I finished in 1:50:09, the 9th woman and 2nd in my age group. As far as finish times go, it was a little slower than what I'd been running (nearly 4 minutes slower than Cleveland), but given the circumstances-- particularly the idiocy in running 15 hilly miles the day before, a lot better than I could have expected. The extra weight didn't help my case either.

I waited around to collect my age group award, after which I was approached by a woman who remembered me from the Snowville aid station at Burning River. I drove home where I then did what I seem to be doing best nowadays: ate. A lot. This morning my weight was the highest it's been since winter, and I feel ashamed of the way I've let myself go, so to speak.

Barkley is coming. Fifty kilometers of what is rumored to be the most unforgiving terrain I'll ever encounter. Twenty-thousand feet of climbing, and as much descent, with sparse aid stations that will be as stocked as an unmanned water drop in most other ultras. I've tried not to obsess over it, tried not to spend too much time pouring over it in social media. I've found that sometimes that approach works best. When you know it's going to be bad, jump in blindly. Without the hype and without the expectations, I can tackle it simply knowing it's going to be the scariest thing I've ever encountered, and expect no less. I made a point of asking advice for footwear and leg cover, but otherwise, I'd prefer just to leave it up to fate. And, despite the predicted 10% finish, I intend to be one of the ones crossing the finish line Saturday evening. 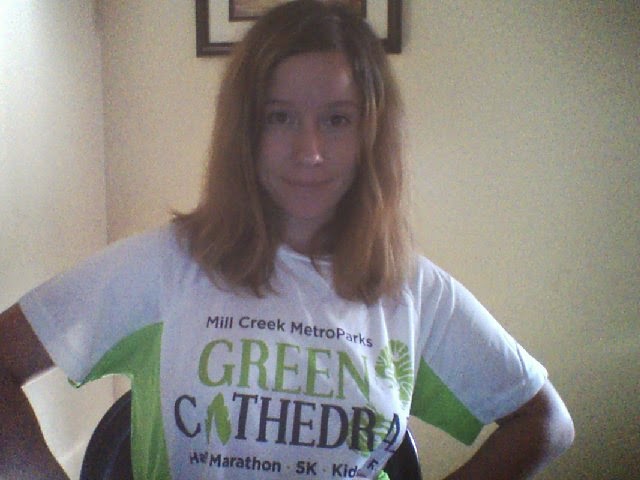 Posted by Kimberly Durst at 8:16 AM