A week had passed since my shockingly better-than-imagined 4th place finish at the Oil Creek 100k, and I was still sitting on the prospect of registering for the Run with Scissors double trail marathon. It was feasible, yes. So was eating a triple order of crab rangoon with a side of fried rice. But, it was a risky move. I stared at the registration page, and studied it, as though looking at it longer was going to make the decision that much wiser. Two weeks later I'd have to run 100 miles on crushed limestone at the Tunnel Hill 100. The last thing I needed were janky knees and ankles.

There are two things in life from which I suffer event specific amnesia: ordering cheap Chinese takeout, and registering for back-to-back trail ultras. Both cause unstoppable, uncontrollable suffering, and yet I find myself eating them both up like a fool, again and again. The choice was mine here: salad or crab rangoon? I clicked the 'register' button. I was in for 52.4 miles. My intestines were already roiled with the wrath of hell.

Oil Creek was my little Cinderella story of ultra racing. I'd emerged from the Barkley Fall Classic intact and with a huge PR, finishing 11th out of the 52 women who started the race (of which only 22 finished) in 11:50. My training had come to a near halt with just the 32 miles and 6,000ft of climbing I ran in Chillocothe the following weekend, and then a scatter of road miles during the week leading up to the race. I was sleep deprived, broke, fat, and exhausted by the time race day arrived, and had hoped to eke out a time in the ballpark of 15:30, banking on my success at other races during the year as a base upon which I could begin negotiations with my muscles and bones when the going started to get rough. I slept on the Titusville Middle School gym floor the night before the race, and woke up feeling more like I was heading out to feed chickens than run in the mountains. How in the hell was I going to compete, even against myself, when I had such a lackadaisical attitude toward racing? 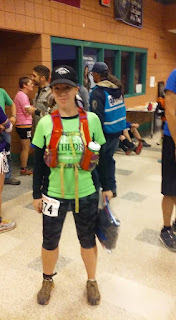 Starting two to three rows back, I fell quickly into 5th place within the first mile of the start. And then, I just ran. Period. I maintained the same strategy I'd embraced at Frozen Head two weeks earlier, charging the climbs and coasting the flats and down slopes. There was no point is sprinting when the running got easy; that killed the quads. And, there was no point in running the climbs; that killed the hamstrings. The best way to keep moving was to employ power and agility-- strong, fast climbing with my shoulders upright and breathing steady. Quick side-steps on the down slopes. Jog the flats. Without a watch or clock, it was utterly impossible to gage pace as accurately on this terrain as I normally can in road or easier trail events. I suspected I was doing well as I headed into the final aid station of the 50k loop, but had no idea I was cruising toward 24.5 miles in less than 5.5 hours. Having climbed over 5,000ft already, I was making good time; and, I figured if I really pushed hard, I could cover the first 50k under 7 hours. It had taken me nearly 7:20 to do it the year before. With caution in the wind and not a care in the world, I rolled into the start finish in 6:37.

As I headed out to start my second 50k loop, it became apparent that I was not only holding onto speed I hadn't an inkling I possessed, but I was a lot further ahead of the 6th and 7th place women than I'd anticipated-- at least a mile. I continued to charge the hills and float the easies, had no catastrophic encounters with bears or diarrhea, and began to wonder as the miles passed, what the hell was happening. My races simply don't follow this path on the flow chart. Rather, they typically follow the vein of: "Does your knee or hip hurt? No? Fall into a bed of rocks. Are you bleeding yet? Yes? Pee your pants. How does that chafing feel? Bad? Pee again. Now how does it feel? Wipe icy hot onto it instead of Butt Balm." Here I was, now 45 miles into the race, sneaking glances over my shoulder while passing runner after runner and...well, passing runner after runner. It was like I'd dodged that bed of rocks and skidded into the Twilight Zone. As I left the aid station, a last glance over my shoulder indicated that there were no women anywhere in sight behind me. And it was then, I think, if one were to ask when my race really began, that I decided I was going to race this 100k. 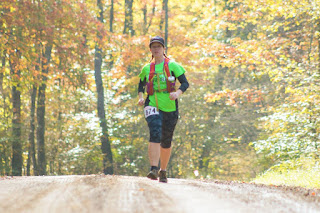 The trails at Oil Creek are a constant flow of climbs and descents with some stretches of very runnable terrain in between. Between the Petro Center aid station and the unmanned water stops on the way to the last major aid station, I caught sight of the 4th place woman, walking about 100 yards ahead of me up a minor incline; and, I took this as my opportunity to move ahead as much as it sucked running up a hill. Knowing how demoralizing it can be being passed at this stage by someone who is clearly running with a little more gusto, I figured charging fast was the only way to make sure I didn't slip into a pattern of loafing along in a game of leap frog. She managed to pace close behind me through the final aid station, but then I never saw her again, even as night fell and my poor night vision led to a painfully slow running pace teemed with a series of tumbles, stumbles, and close encounters with every sort of plant and rock known to the park. I finished sprinting in 14:28, nearly 2.5 hours faster than my time in 2014.

I celebrated by eating too much, sleeping too little, and then going back to work the next day. I took a week off after which I made my usual ambitious training plans that I had no intention or inclination to keep, and then spent another week fumbling through easy miles and no really cohesive plan. With three weeks until Tunnel Hill 100 and one week until Run with Scissors, I had to make a decision. Salad and smart, or 6 pieces of crab rangoon? Crab rangoon. With fried rice.

I changed my mind and emailed the race director two days before the race. It was going to be hard enough beating 24 hours at Tunnel Hill fat and out of shape. I didn't need to further complicate things by blowing out my knees, hip, and ankle two weeks before driving to Illinois.

I drove to the race after working all night and started the marathon feeling like I was halfway to hell and halfway asleep. Run with Scissors is a laid back event that falls close to Halloween and encourages costumery and fun, two things I don't have to be twice reminded to embrace. Overdressed in formal attire with footed nylon stockings, a long sleeved shirt under my dress, and a lot of jewelry, as an 80's prom queen, I was moving fast and suffering hard less than 10 miles into the race. The good thing about costume races, however, is that the more ridiculous you look, the more distracting it is to everyone around you, and laughter is contagious. In other words, by taking the cake for looking especially ridiculous, it was really hard to stay miserable. I'd set no real goals heading into the race except, perhaps, to pace under 12:00/mile. On a trail course that boasted a vertical profile of about 2,200ft for the marathon, this seemed reasonable providing Mother Nature didn't unleash another mud bath like I'd seen so many times this year already. 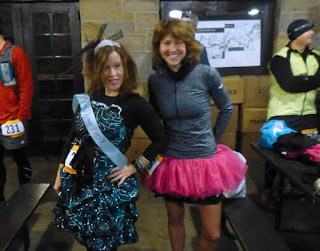 Unlike Oil Creek, people passed me every mile along the way. At 10 miles, I was in 2nd place. By 16 miles, I'd fallen to 4th. The Perkins loop, a five mile segment loaded with hills and creeks that I'd marked two days prior to the race, is typically one of my favorite places to run, but knowing every turn, root, and hill along the way made it seem twice as long and twice as challenging at this stage in the race. An aid station sandwiched the loop at 11 and 16 miles, and as I approached it the second time, I was tired and thirsty. Two hours and fifty-one minutes had lapsed. That meant I had 2:08 to finish the last 10.2 miles if I was going to finish under 5 hours. Apparently, somewhere between "I don't care" and 16 miles, I'd decided this was the time I was aiming to beat. It felt like a long shot, but if I kept running, I figured I might come close. And, even if I didn't, at least I'd make a grand appearance at the finish line, dressed the way I was.

The next six miles passed a lot faster and drama-free than I anticipated, and I'd somehow managed to continue running the entire way. I reached the last aid station feeling like I was at mile 96 instead of 22, but with 53 minutes to cover the last four miles. The trail, after the second to last road crossing, becomes a serpentine twist of root and leaf covered hills. At the top of the last major climb, my friend Mark Carroll was waiting and offered a fist bump and words of encouragement. Terri Lemke, who'd paced my last 35 miles at the 2014 Burning River 100 was right behind me, and passed me shortly thereafter. This was actually a helpful move, as she was moving very fast and I was trying very hard to keep up, or at least keep her in sight. In retrospect, I don't think I'd have done as well had she not passed me at this point. As I turned the corner toward the last long, grassy stretch leading to the finish line, I heard one half marathoner (who'd started two hours after me) telling another that they'd be finishing under 3:00. That meant I'd be finishing under 5:00. I passed them in what was probably a bizarre looking sprint in my flashy jewelry bedecked formal wear and black tights, and finished in 4:55:53. Like Oil Creek, it was an incredibly unexpected success. 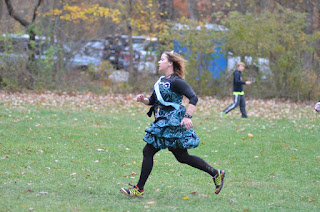 Now, with 10 days separating me from my last long race of the year, I'm sitting here wondering what I've gotten myself into this time, having set the bar higher than ever before. It isn't even a question of smart or stupid, cautious or ambitious, salad or triple order of crab rangoon. It's a question of whether or not I can keep my shit together for 20 hours rather than 10, whether I can keep running without the hills to break the monotony and pain, without the roots to keep me mindful, creeks to keep me on my toes. It's something I've yet to do in a race distance that always exceeds my ability to maintain logical sensory perception processing, where bones hurt as much as muscles, and food issues can't be ignored. In 10 days, I can only hope that it all comes together, and I find a way to keep it there.

Posted by Kimberly Durst at 3:50 PM