"Character, like a photograph, develops in darkness"
-Yousuf Karsh

Every race has a defining moment-- that instant when a singular piece of the puzzle is inserted and the entire picture is suddenly made clear. Sometimes it doesn't happen until the very end. Sometimes it's a surge that cannot be met by competitors. Sometimes it's when you fall, 10 feet out of the starting corral, and bloody both knees. At last year's Barkley Marathons, that realization came when I missed the turn-off down Jaque Maite hill and found myself alone and unsure of even which galaxy I was roaming. That moment haunted me for a year; it was when I knew my race was over.
The rawness of the Barkley and its intimacy have drawn me to the event since I read about it a decade ago. It encompassed all the things I loved about the sport and excluded all the bullshit I hated, with the added bonus of a certain amount of mystique and exclusiveness that actually prevented me from taking it serious for several years. After all, if only a few dozen runners were granted entry each year and the entry process was shrouded in secrecy, how might I ever gain access?
Following Hiram Rogers up Hillpocalypse after nailing the second book head-on, two things became apparent: 1. I couldn't feasibly go any faster if I had any hope of surviving the next 15 miles; and 2. I had to go faster if I had any hope of making the cutoff. Reality hit hard: if anyone could pace this course to a 12-13 hour loop, it was Hiram. And, while I was able to gain ground during the descents, I was falling further behind with every ascent. By the time I got to the high wall, I felt like I was going to shit my pants and have a seizure, and Hiram was barely a dot in the stratosphere up above. Joel Gat slowly plowed past me, and then John Kelly-- clearly having been lost-- scurried by. And, then? And then it was just me. This was that defining moment. Though, I had no idea just how defining it was, and what kind of party favors were waiting to pop out of the can at me further down the road.
I'd superstitiously wanted to keep my entry status a secret from Day I, and was rather distraught when posts began to sprout like dandelions all over my facebook wall within minutes of the much-anticipated "Weight List" being published for the Barkley email listserv. The jinx jumped out as a thing of legend and evolved into a very real entity with the passing weeks, and with every mention of The Race, I became more concerned that people were going to build a very unrealistic expectation for me-- especially with the ill-timed release of the documentary that prompted droves of people to proudly proclaim, "pshhh I'm gonna do THAT", as if it were a hop-skip over a ditch and a trotted block to the candy store. At some point I realized how ludicrous the entire process had become; I was revering the name "Barkley" publicly like it was Voldemort, or one of those Bloody Mary-Freddy Crougar double dog dares from childhood (during which we'd lock ourselves in the bathroom, turn off the lights, and say the name 3x in hopes that we'd turn on the lights to face some sort of monstrous entity). Saying "I'm running Barkley" had almost become synonymous with a wish for imminent death-- or at least something really awful, and I half expected to wake up bald and bloodshot with my fingernails missing for having done it.
Compared to last year, I felt much better prepared. I'd obsessed over the park map, and carrying all the right gear. I'd had my sister drop me off several times at 8pm to run alone overnight for 12+ hours in sub-freezing conditions, and I spent hours at a time climbing on the treadmill with the incline maxed. In the fall, prior to submitting my request for entry, I'd pushed myself through a gamut of races that included the Barkley Fall Classic-- a 50k race through the same Frozen Head State Park that included an estimated 15,000ft of ascent and incorporated some of the beloved Barkley features; a 50k with 5,500ft of ascent in Chillicothe, OH, a 100k with 11,000ft of ascent at Oil Creek park in Titusville, PA; a trail marathon in the Cuyahoga Valley National Park; and finally a 100 mile rail trail race in Vienna, IL-- which finally allowed me to beat the coveted 24 hour mark, something I'd wanted for years. Having completed all of these events within an 8-week window, and having done well, served as a tremendous boost in confidence; and with the completion of two more 6-hour trail 50k races in mid-February and March, I was convinced I should be able to eke out my first Barkley loop in the ballpark of 11:30-12:00. 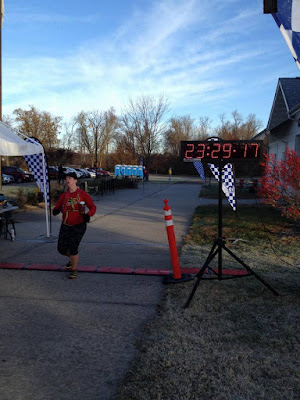 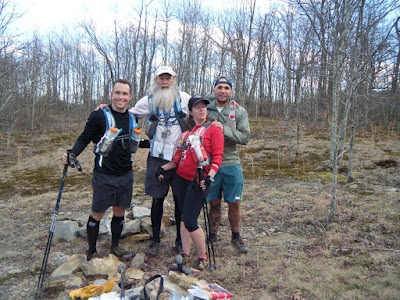 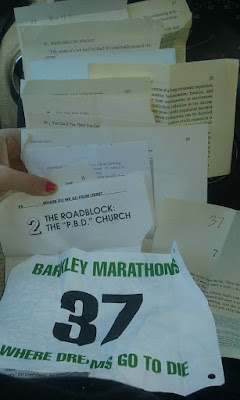 We turned and started a walk that built momentum and speed with every step until we were jogging, hand in hand, along the driveway through camp. This was it: the big moment of reckoning. The wave of emotion that came pouring in was almost too overwhelming to even process. I was hungry, tired, overjoyed, satisfied and disappointed simultaneously, and before I knew what was happening-- our hands came down on the yellow gate in unison. It was over. We'd finished the longest loop in Barkley's 30+ year history: 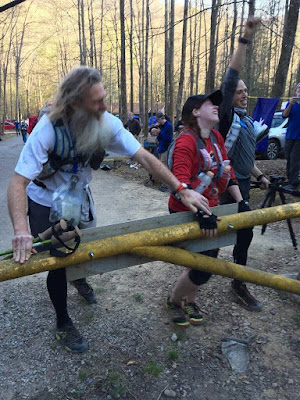 It really was over. Over: I could've repeated this like a mantra, with a cheeseburger and enough whiskey to tranquilize a bear in hand, and a hot Greek man fanning my poor ghastly body and soul to sleep. We'd done it. It was OVER.
My mission at Barkley this year, ultimately, was to finish any loop I started. I think you've got to be willing to do that, and you've got to have a tangible goal in mind upon which you're able to measure success. Ultimately, our failure was, by Barkley standards, one of the most spectacular in race history. I own that, and I'm not ashamed. To someone unfamiliar with the Barkley, it's probably hard to find any success in what unfolded during those 32 hours. But, to those who have been faced with those mountains, I don't think it's so hard to see at all. You just have to keep moving, keep fighting, and refuse to entertain even the whisper of doubt. As long as you've got a compass, water, warmth, and the will to keep pushing onward and upward, the creature comforts waiting on the other side of that yellow gate will embrace you in due time.

Posted by Kimberly Durst at 5:04 PM