I made the decision to reduce my carbohydrate and sugar intake in early April, after posting in the Burning River 100 forum about perpetuem-- a Hammer Nutrition brand product that is intended to satisfy one's nutritional needs during endurance sports lasting more than 4 hours. Up to that point, I'd been toying with adding product after product-- gels, chews, powders, all loaded with carbs and sugar. Perpetuem was to be my latest addition. It was only after re-reading my own post and then viewing a picture of my treadmill, covered in a confetti of Power gel wrappers that I had an epiphany, realizing that nutrition was not only what was causing me to suffer during long events, it was keeping me heavier than desired and thus slowing me down, making me feel sluggish, etc. I made the decision to evaluate my dietary choices, and after conversing with two friends who shared a common (albeit different) reduced-carb dietary plan, chose to follow the advice of fellow ultra runner and good friend, George Themelis.

Over the course of seven weeks, I have had interesting results:

1. I have lost 8 pounds. My starting weight was higher than it had been in a couple years: 143. I reached a low of 134 recently, with a daily average of about 135. I've hit a plateau, but I am confident I'll continue to lose weight. I have a loose goal of 115-125. Basically, I'm going to let my body make this decision for me. I'm going to continue eating what I've been eating, and when the weight loss stops, I'll trust that's what my body feels is right for me.
2. I feel healthier. I've heard from people who have briefly toyed with low-carb diets that they feel "sick" or "sluggish", and have quit as a result of this. I admit that the first 2-3 weeks were extremely challenging. At one point approximately a week into the dietary change, I went out for a 30 mile training run, and had to abandon ship at 18 miles because I felt so terrible I could not continue. After about 3 weeks, I noticed that I was less agitated. I do not get "food tired" anymore, which used to happen to me after downing in record time something frightening like a whole pizza or a box of Krispy Kreme doughnuts. Now, I may eat a ham and cheese omelet with sliced raw almonds and Greek yogurt for breakfast, some chicken with feta cheese, spinach and an oil and vinegar dressing for lunch, and something similar for dinner. I'm snacking less, and when I do snack, I'm not busting into a bag of Doritos with gusto; I might eat some toasted pine nuts with honey butter or a hunk of swiss cheese. 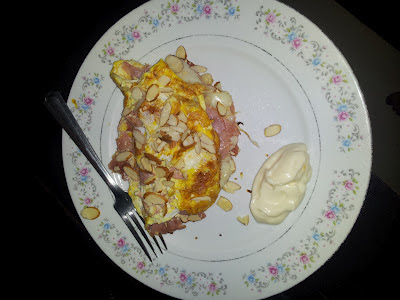 ham, egg, and swiss with raw almonds and mayo for dipping: a personal favorite

3. Most importantly, I am running better than ever! Six years ago, before having children and when I ate a more "paleo" diet, I was about 10 pounds lighter, and ran fast. Until now, I'd been unable to achieve the energy level and overall feeling of confidence that I had in my running during that time. I tended to fare well in distances up to half marathon, but beyond that felt I was running poorly. I finished the Towpath Marathon in 4:32:15 in part because of an injury that occurred, but also in part because I just plan wasn't running well. Last weekend, I finished the Cleveland Marathon in 4:22:53. Not only did I beat my previous time by nearly 10 minutes, but it was in less than ideal climate: 80 degrees and sunny by the time I finished! Prior to Cleveland, I handled 46 miles at the Outrun 24 hour trail run in just over 10 hours, something I am confident I'd have been unable to do 6 months ago. I recovered quickly after both races. The only "adverse" effect of reducing carbohydrates is that I've discovered I require a significantly higher fluid intake. I drink much more water, and I'm sweating more.

While this is only a "check in", or an update on my progress, I thought it was worth mentioning, especially for anyone who is concerned with encountering fatigue, "hitting the wall", or weight loss in endurance sports. Contrary to popular opinion, it is not as easy as "eating fewer calories" and "running more miles". After all, most "diet" foods may be low in fat and calories, but high in carbohydrates which are burned quickly, leaving one hungry again sooner. 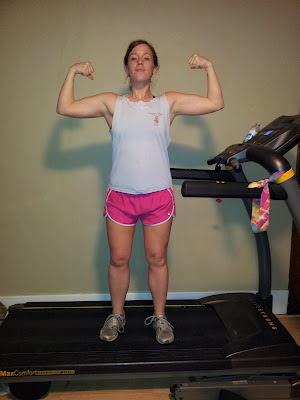 Posted by Kimberly Durst at 8:42 PM