There are things I clearly do not know about how to run 100 miles, things that I think only come from the experience of having done it. Well, I mean, of that I am absolutely certain. After all, how many men can walk out of a birthing center, dust off their hands, and proudly declare, "well, I think I've got that one all figured out!" In truth, I am taking on this beast utilizing the skill and experience of many things that are not even running related. For example, I distinctly recall the misery of walking 22 miles in leather platform sandals from Ravenna to Hiram early into my freshman year when I was stranded there with nobody to call. It took about  6 hours, and I reached campus just in time for cross country practice with bleeding blisters and no coherent explanation for what train had just hit me. In fact, the only real driving force was knowing it needed to be done, that sitting on the side of the road was almost as ridiculous as the sight of an 18 year-old girl walking along the highway in platform leather sandals, so I might as well keep walking. I plan to incorporate Six Hours to Hiram in Leather Platform Sandals on the Highway with Bleeding Blisters into my Dig Deep Strategy if need be somewhere between Happy Days and Infinity. Maybe. Or, something of the like...

I like to be challenged physically and mentally, preferably physical challenges that require problem solving, strategy, and a lot of concentration. I've been asked countless times why I'd want to run my first 100 unpaced and without a GPS device, and I think it falls into this realm. I'm somewhat of a thrillseeker when it comes to running anyway, and always preferred my Zen approach of days long gone when running meant a frolic in the hot, hot sun without a water bottle, socks, or concern about my overall pace or even necessarily where I was going. I don't expect everyone to understand why I'd intentionally put myself in the throes of a "naked", lonely 100 mile trek. But, I imagine there's probably some other soul out there who gets it.

My original game plan of a 3-4 person crew very rapidly deteriorated into a quasi-crew of one with the possibility of an impromptu support party showing up late in the game when it starts to look a little more likely that I may, in fact, conquer the trail and finish. However, as of this morning, the jury is still out, albeit with a unanimous feeling of doubt that I'll be able to do it. Why? I'd imagine it's my slow as molasses marathon finishes, or perhaps my less than athletic physique-- perhaps a healthy combination of the two, and this lovely duo scream to all and sundry, "you've got to be kidding me". I mean, nary a race passes without skinny teenaged girls eyeing my abs and thighs in curious disgust. I've heard my fair share of "big ass" comments, enough that if I had a penny for every snide remark or second look of disdain, I'm convinced I'd be able to mark a trail from NYC to LA. I'm reasonably quick at 5-10k's (23:06 at my last 5k road race two weeks ago/7:27 pace), have a respectable half marathon average of about 1:55, but then hit marathon and transform from an ungraceful, oversized rusty pickup truck whooshing down the road into a busted, oversized tank that only has one sad speed. Despite this, I managed to finish faster than almost 3/4 of the female field at Cleveland in May, and had a solid, mid-pack finish (12:41; 86th/174 starters) at the Mohican 50, my first real taste of ultra trail racing. Sometimes I want to tell those skinny teenaged girls, "good luck; I'll be waiting for you at the finish line for a high-five", but that's not my style. 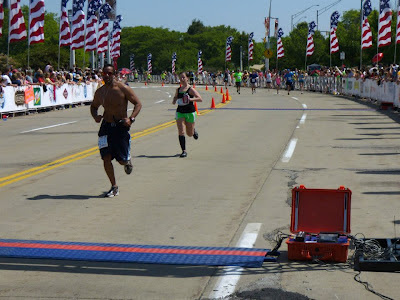 Anyway, it was suggested to me some months ago that I wait until I've "done well" at a few marathons before I attempt a 100. I think others are more worried about how slow I run these longer distances than I am, and feel that a 4:22 marathon finish like I had at Cleveland means there's no way on heaven or earth I'm capable of running 100 miles.  I was inclined to retort with the sweetest tone dripping with sarcasm, "I mean, because a 3:10 marathon runner has never had a DNF at Burning River...and 4+ hour marathoners have never finished, right? Right?" Anyone is capable of running "stupid", regardless of whether they've a 2:52 PR, 3:57, or 4:46. Perhaps it even helps that I have no qualms with reaching the 25 mile mark at Burning River in 5 hours since I don't exactly aspire to win. I don't have an ego in regard to speeding my way through 100 trail miles. I think there are benefits to being a slow tanker with a plan. Where one runner reaches 50 miles in 10:13 and doubles over to vomit before making the decision to drop, I'm perfectly content with reaching the same mile marker in 12:30 providing I'm not staggering off course to vomit.

I have made strides and leaps since December when I meandered out of sheer curiosity to the Burning River 100 website and exclaimed, probably at 2am, after hours of navigating through hundreds of pictures, a race packet, results, and eventually a couple YouTube videos and as many finishers' blogs, "Dude. I'm doing this." Despite my bum knee having not yet healed (and eight months later...still having not healed), I dove into training head first, or rather-- cannon balled from the high dive, and found myself immersed in a sort of subculture with which I knew none of the people, none of the rules; everything was new. With a hectic night work schedule and no babysitting during the day for my then two and four year-old children, I often found myself either running for hours on my treadmill while they were sleeping, or late at night with a headlamp. My first 50k passed with minimal fanfare; I finished the last 6 miles or so mostly walking, crossing the finish line in a less than stellar 5:43. 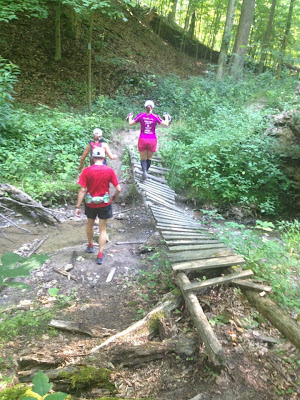 Since February, there have been perhaps a handful of weekend runs that fell below 17 miles, most extending well into the 20's (or greater). Granted, some of these were either on the pavement or my treadmill (though, believe me, 23 miles on a treadmill is worthy of a certain amount of praise), but many were spent on more challenging terrain. The height of my weekend training was the last weekend of June during which I embarked on a 26.6 mile night run on the Burning River course, came home to sleep for 2.5 hours before spending 5.5 hours walking and sightseeing, came home very late to sleep for another 2.5-3 hours, and then ran the last 20.8 miles of the Burning River course. Two days after this I raced my first 5k in two years, with a decent finish time and a lot of confidence. The lack of sleep, and repeated pounding to my legs seemed to work like the pieces to a symphony, and all at once I had this grand epiphone that others probably had weeks or months before: holy shit-- I think I might be able to do this after all. I mean, running through the night through guts of fire is not, in and of itself, a major accomplishment; I've done this countless times. Sleeping for less than 3 hours and then embarking on a long drive and even more time in terms of hours and minutes spent walking is likewise, not a grand achievement. A 20.8 mile trail run after the same sub-3 hour sleep isn't optimal, but I've done it before. And finally, a 23:06 5k is a rather average finish time for me especially on a familiar course, and especially after having two days to rest. However, strung together like so, I felt a little more like I was standing back to look at something a little more impressive, even if it didn't really compare to the back to back 30 milers other runners were doing. But, then again, we each have our own way of "getting it done", right? 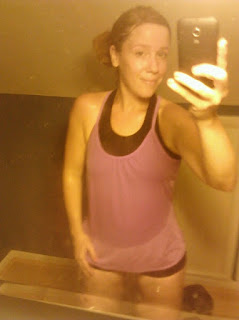 post-training run and sweaty; I'll be wearing purple/black at Burning River next weekend

I've come to the conclusion that I'm as ready as I could hope to be at this point, and what happens next weekend is not going to be the result of merely throwing in the towel and giving up. I have no illusions of a phenomenal finish, dashing across the line with my arms in the air and a giant grin on my face. I expect to have the grateful teary-eyed smile of the I'm Happy to have Survived that Storm lady, hobbling with a bounce with dirty, bloody knees, clutching my water bottles in such a manner that it's going to take three people to free them from my hands. If I fare better than this, I'll chalk it up to immaculate race strategy on my part, and download my mental notes onto the keyboard for later reference.

If you're reading this and will be joining me on this journey next weekend, I wish you nothing but the best. After all, that's what we need, right? Otherwise, I hope you follow me via webcast and send some good vibes my way. This will be nothing short of an adventure...