A Mohican Adventure with Kimberly: 50 Miles, Watermelon, and a Kiddie Pool

Twenty-seven hours later, I'm convinced that every muscle in my body hurts except perhaps my heart, and even that is up for debate. In fact, muscles hurt that I didn't even realize I'd used yesterday. I had the pleasure of walking down a flight of stairs backward this afternoon, the only way I could descend to ground level without further torturing my already abused knees, and I could barely raise my arms above my head. The latter took me completely by surprise, I admit, considering I spent the day carrying my handheld bottles (and often half full) rather than twenty pound weights, and my lungs feel like I breathed in all the ash from a massive volcanic eruption. It was a solid, profoundly good experience, though, running and finishing the Mohican 50 Mile Trail Run, pain and agony of every kind considered. And, I'll be back next year...

I could say the experience started at 5:02 am when we set off on our respective journeys, but I think the Mohican experience began for me the day before. I spent most of Friday morning and afternoon filling drop bags I wouldn't use, packing bags that mostly stayed packed, and washing clothes I ended up not wearing. We set sail at about 4:30, reaching Loudonville around 6:30 where I immediately found Michael Schaffer, George Themelis, and Matthew Mondello. I was still hanging onto my 12-hour goal like a life belt, even as I stared off toward the woods that seemed to ascend into the heavens. It hadn't fully sunk in yet that in less than 12 hours, I'd be in those woods; I was hit hard with that realization only a few miles into the adventure the following morning.

The Mohican Lodge was a lovely place to spend the night before the race: 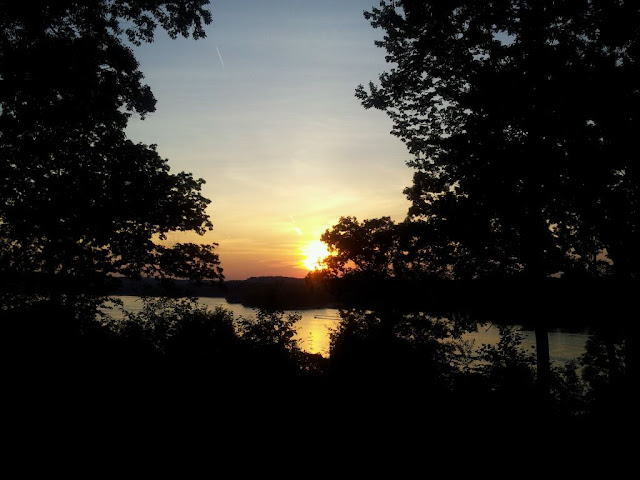 (sunset at the Mohican Lodge; I took this photo from the patio) 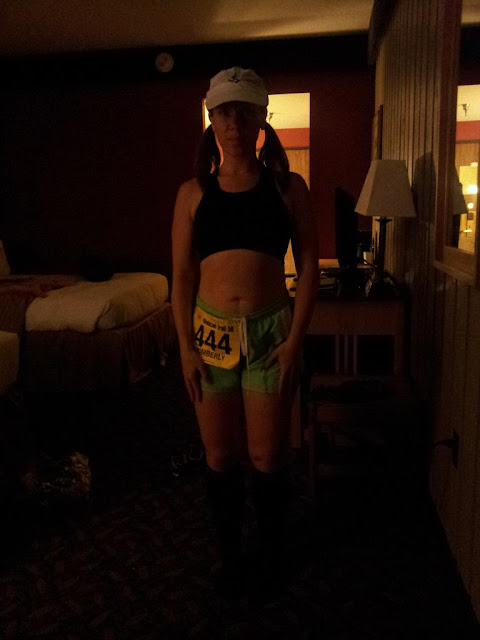 early in the AM, before leaving the hotel for the start


Lovely or not, however, I slept very poorly and woke up at 4:00 feeling as though I'd have been more alert and ready to run having not slept at all. I carpooled to the start with George Themelis and his wife Liz, and upon arrival wandered into a sea of blinding headlamps. The start, I admit, was mildly annoying because rather than spend a couple miles in a more open area where runners could adjust pace accordingly, almost immediately we were forced to file onto a single track trail where I spent a good portion of the first mile walking or slowly trotting, unable to pass anyone. In hindsight, it really wouldn't have made a tremendous difference, and the first few miles may have cost me a negligible 5 minutes at most-- which wouldn't have made a difference anyway in the grand scheme of things. The first aid station passed quickly, although the runners were still packed rather closely, as both the 50 and 100 mile races started simultaneously forcing nearly 400 people to run on single track trail within a reasonably small area. At 8 miles we were maintaining a rather slow but comfortable11:30 pace.

I got my first real taste of the Mohican 50 shortly after passing the second aid station. Some gorgeous and faster paced single track trail running abruptly opened into a long, slow ascent up a wide, hellish trail of dirt and rocks with the oh-so-lovely bonus of fresh horse poop. After walking for what felt like 100 years up this boring stretch, I finally found myself in the midst of less open space, trees and rocks more to my liking. Shortly thereafter, I wiped out completely, stubbing my toe on a rock and falling so hard I actually executed a complete roll. Within yards of this, I encountered some excellent rock and root formations that required both my hands and feet to navigate, followed by this interesting feature: 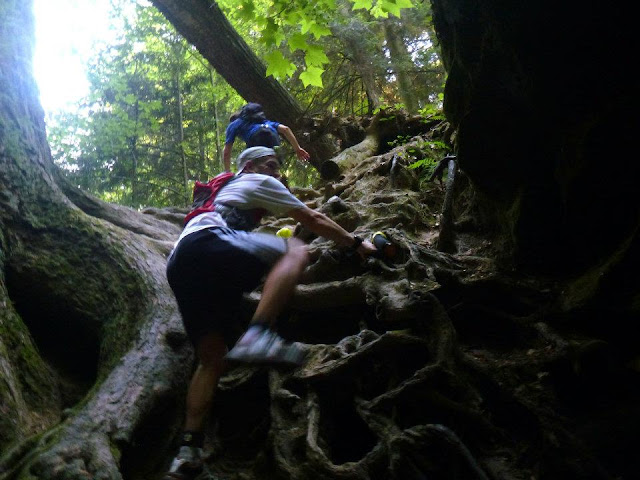 the ascent up the root climb (photo courtesy of George Themelis)

I somehow managed to nearly empty both water bottles between the third and fourth aid stations, and found myself in the midst of my one and only bathroom crisis of the entire adventure. I couldn't have begun to hazard a guess as to what my overall time and/or pace were, but I estimate I was averaging about 14:00/mile with all the walking. Reaching the Fire Tower aid station, I made a beeline for the port-o-potty, and instantly felt infinitely better. I also found that sitting for just one minute took some pressure away that had been starting to form in my knees. I had about 3 pieces of watermelon, 1/4 of a pb&j sandwich, and refilled my water bottles.

Between 19 and 26 miles, I maintained about a 13:20 pace I assume, because I finished the long loop (26.6 miles) in 5:48, or approximately 13:04/mile. This, I realize, was probably the start of what turned into a grueling, demoralizing 10-12 mile stretch spent mostly walking, and watching as literally dozens of runners passed me. At one point, I caught myself on the verge of crying because I was so frustrated by the pain in my knees that was uncontrollable it seemed, and the fact that I'd clearly fallen way behind pace. I knew slowing down was inevitable with a pair of knees that generally became problematic at 20 miles, and without a solid first loop, my goal would slip between the cracks. I was mentally spent by the time I reached the aid station near the 50k mark, so much that the devil on my shoulder was telling me if I just made it to the Fire Tower again, I could drop. While I didn't seriously consider this as an "option", the fact that this thought crossed my mind at all speaks volumes about the amount of physical pain I was experiencing. I'd walked a significant portion of the course between Mohican Adventures and this point, and had found myself working my way down hills either sideways or backward at times because it was less painful on my knees.

At the Fire Tower, however, I was surprised to find Ben and my children waiting for me-- and my pink bag containing Vaseline that I desperately needed. I learned it was 1:31pm, which meant I'd been on the course for 8.5 hours-- which also meant that if I continued at the pace I'd been moving, I risked finishing in 13 hours. I advised Ben to expect me to finish between 12:30 and 13 hours, said goodbye to my children, and headed back out feeling mentally more focused but physically worse than ever. It was at this point that I fully embraced the concept of running "aid station to aid station". Granted, I'd held onto this as my game plan all along, but I don't think I really understood it completely until I worked my way back onto the course after leaving that aid station. 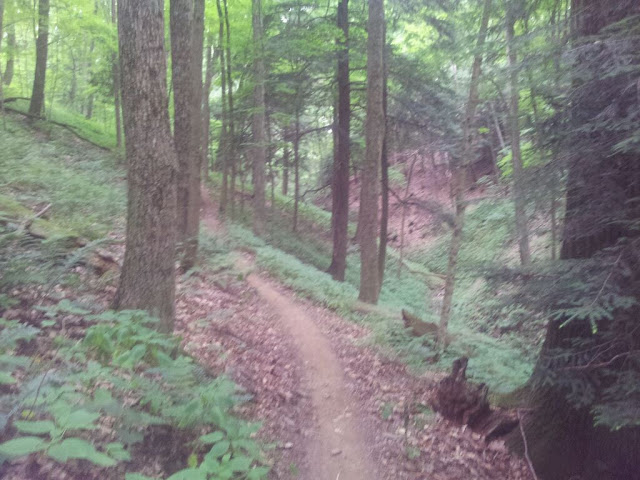 somewhere between 38 miles and infinity


At 39 miles, I made a decision I should have made miles before and took both s-caps and 2 ibuprofen in addition to what had developed into my expected grab of pb&j and watermelon. I'd wrongly assumed I was getting enough salt from electrolyte tabs I'd been dropping in my water, and assumed ibuprofen wouldn't help the kind of pain I was experiencing in my knees. Within 30 minutes of downing the cocktail of pills and some coke, I felt like a runner reborn. I found myself smiling for no reason, excitedly counting down the mile markers that dotted the course. Still walking every hill, I was able to start running again, at least more than I had in the previous miles. By the time I reached the last aid station, I knew I had a sub-13 hour finish in the bag. I'd carefully calculated that even if I started hobbling along the course at a leisurely pedestrian pace (19 min/mile), I'd still finish just under the 13 hour mark. This was encouraging enough for me to leave the aid station with a huge smile on my face and enough energy to tackle the last 5.8 miles with gusto. I felt more confident than I had in more than 20 miles, and with each minute that I peeled from that 19 minute hobble, I knew I was going to finish that much faster.

The last mile was incredible. I remember departing the trail and realizing all that separated me from finishing was a stretch of pavement. As I ran down this short section, it felt like a thousand people were watching and cheering. I heard the words, "finish strong!", and I felt like I was sprinting to the finish of a 5k (even if I was actually moving in slow motion). I checked for my time and initially saw it was 5:43 which meant 12 hours and 43 minutes. (Later I would see my finish time listed as 12:41:48). 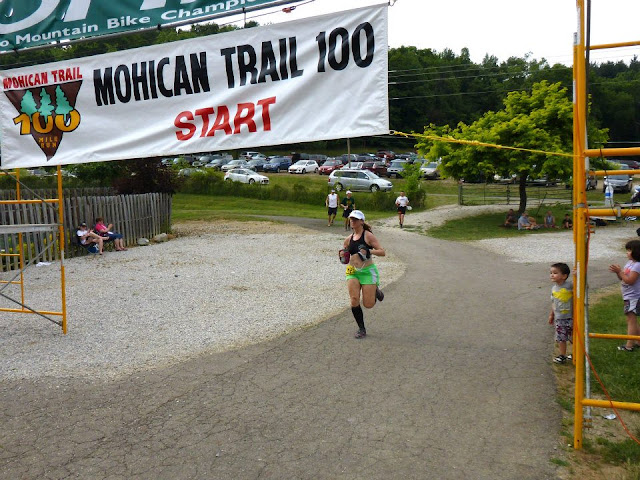 finishing the Mohican 50 in 12:41:48 with my children cheering from the side


There were two incredibly pleasurable (or at least pain-relieving) experiences I recall post-race: first, standing in a kiddie pool filled with cold water. Had I been able, I'd have probably thrown myself in, belly-flop style, clothes and all, and stayed there for as long as I was allowed; and second, sprawling out on the cool grass in the shade to watch other runners finish. By the time we left, I think I can safely say I slaughtered half of a watermelon (one of 3 items I ate during the race), and drank enough ice water to fill a bathtub. I can say with certainty that through all the physical pain associated with my knees, my mind remained clear and I retained my ability to laugh and joke with anyone willing to run with and talk to me. And, despite all the pain, I truly feel like I found my calling, that this sport of adventure running is what I was meant to do. 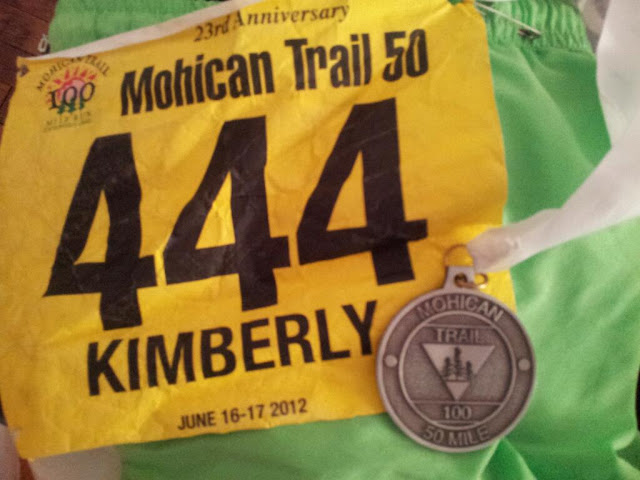 I loved everything about this experience.