Immediately following the finish of the Lake Health Half Marathon this past weekend, I concluded that a race report wasn't worth my time for three reasons: 1.) I hated virtually everything about the race. 2.) My finish time was the tragic result of walking and a bathroom stop, both to which any experienced runner would retort, "tsk tsk...". 3.) Hell...just repeat reason number 1; after all, the more I thought about it, the longer the shopping list of complaints became. It wasn't a "good race" for me, in any sense of the phrase.

I was admittedly not excited about this race. Over the past few months, I've unfortunately evolved into a snarky entity that scoffs at racing distances less than marathon, even those I've traditionally enjoyed. I made a point of mentally preparing myself for at least one 5k and one 5 mile race between now and Christmas, if anything, for the sake of being able to say I've run the gamet (literally) on running in terms of distances. I imagine that this attitude probably poured into the early miles, and lead to the above mentioned reason number 1 for not wanting to write a race report. 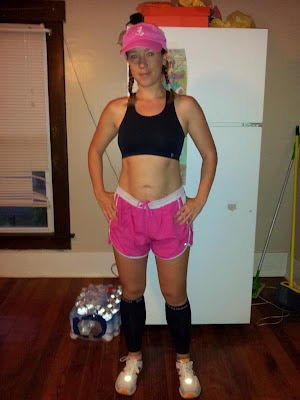 Standing at the starting line, I was aware of two things: it was extremely warm, and the 5k and half marathon runners were completely mixed, with lots of children clogging the good spots closer to the starting line. While I'll gladly step aside in marathons and larger halves where there are corrals or pace leaders wielding enormous signs, generally I fare well in any distance less than marathon and keep myself within 4-5 rows of the starting line. I was thankful when the waters parted and 2/3 of that crowd stepped aside, assumingly because they heard an announcement that I didn't. Anyway, I took off like a bat out of hell, totally unnecessary, and which surprisingly didn't ring any internal warning bells. I was also running on my toes, trying desperately to acclimate myself to racing in the New Balance Minimus roadsters. I reached the first mile in a disappointing 8:13 and immediately fell into an unnecessary state of mental disarray. While I'm not sure which pipedream type scheme I'd hatched at the onset of this experience, clearly it didn't include an 8:13 first mile. The funk exploded exponentially as I continued into miles two and three, and observed two more things: first, there was no timing system and no timers; and second, an up a creek without a paddle water situation was developing faster than the speed of light. I noted an unexpected pain in my calves, which I lamented to Ben who was, at that stage of the race, still running within earshot of me. I remember him telling me, as we passed the 3 mile mark, that my time was 24:33, which clearly meant I'd either run two back-to-back 8:10 miles, or I was increasing my speed. The latter was confirmed two miles later when I reached the 5 mile mark in 40:14.

Even at this stage in the race, I was not convinced the train had left the station in my head, and assured myself that if nothing else, at least I'd banked some good time for later in the race. (I mean, because after all it's perfectly normal for me to run a 7:49 fifth mile in the midst of a scorching hot half marathon, right?) I wasn't thinking about hills. No. I was, however, thinking about using the bathroom...and did, approximately 3 minutes later. This cost me an unknown amount of time, negligible I imagine, albeit enough for Ben to pass me. I spent nearly a quarter mile accelerating to catch him and then, realizing I wasn't feeling fatigued, passed him. This feeling continued through the eighth mile, despite my growing irritation with the water situation, and the missing 6 mile marker.


Miles 9-11 were the kind of hell I wouldn't wish upon anyone. My mental state deteriorated rapidly with every new hill-- and the jolly happy souls manning the aid stations and lawnchairs who insisted with each one, "oh, it's all easy from here; this is the last one!"  By the fourth deceptive reassurance, I threw myself at the whim of the beast, and just started walking. Uphill. For an entire mile. (You read that correctly: in addition to using the bathroom, I walked for an entire mile). So irritated that spectators were falsely shouting "last hill!", and that my handheld was running on fumes and there wasn't an aid station anywhere within sight, I briefly toyed with the thought of just sauntering along the course until I reached the 12 mile marker, and then truck it in with gusto to the finish. Thankfully, this thought passed as quickly as it started, and I found myself "walking with a purpose". At the conclusion of the Miserable 10th Mile March, I started running again, and, with the exception of one hill about halfway through the 11th mile, I ran the rest of the way. I found a second wind on the 12th mile, and started passing runners like they were standing still, easily reclaiming the 8 minute pace I'd maintained previously. 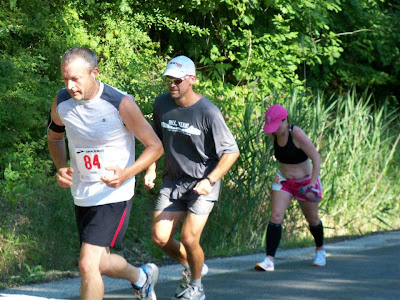 As I turned the last corner, I felt strong. Although I can't say I was pleased to see the clock ticking toward 1:56, I still felt it was a reasonable finish considering all the walking. The heat, surprisingly enough, did not have the same effect on me as it did at Cleveland, despite a starting temperature that was 10 degrees warmer, and equal portions of uncovered, unshaded  pavement. I drooped into a folding chair for a record two minutes, I think, before a gentleman not so kindly asked me to move on, to get up, so that another runner could have the chair even though there were at least six others beside mine. Rather bewildered, I stood up and floated toward the Table o' Treats on the other end of the post-finish chute, and discovered in dismay that there were approximately five pieces of watermelon left that didn't look like they'd half-survived the apocalypse. I ate two of them, and moved on, expecting Ben to finish shortly. I did note, however, that there were about 50,000 times as many cookies and slices of pizza. Six months ago, I'd have reached a state of nirvana, collapsing into a heap on the grass surrounded by all the pizza and cookies. On Sunday, however, it was more than a stone's throw from defining the word "appealing".

I found out later that I finished 35th out of 161 women, 6th of 20 in my age division. This was surprisingly very disappointing considering my calculated decision to walk an entire mile, and stop for the bathroom with less than 8 miles remaining. Why? Had I not walked, and had I not stopped to use the bathroom, I'd have likely finished in the top 3 in my age division. I mean, I easily cost myself 5-6 minutes on the mile of walking alone. Ultimately, I finished in 1:56:21-- one of my slowest half marathons. Ben finished in 2:13-- his slowest finish by 7 minutes, and in part the result of not having adjusted yet to the low carb nutrition plan that I also follow. My next attempt at this distance won't happen until the River Run later this year. I'm confident I'll surpass my goal of 1:48.
Posted by Kimberly Durst at 4:59 PM