While I easily could have given this race report an alternative title: "Akron 2012: the Anti-social Racing Experience", or perhaps, "Akron 2012: Passed up Fun for a Faster Run", I decided I'd stick with a rather non-humorous, nondescript heading, and let the magic happen in the words that followed. To be honest, I didn't have much faith in this race unfolding the way it did. I woke up at 4:15 and felt like I was tackling the day with no real game plan. I didn't know what to wear and finally decided on the unflattering black shorts that carried me through the first 54.6 miles of Burning River and the NB Minimus trail shoes (yes, trail shoes on the road) that carried me through the last 46.3 miles of the same race. I wasn't hungry and didn't want to tempt fate, so I settled for a few almonds and a couple wedges of an orange. I realized, as I climbed into my car, that I didn't have my printed directions, and that I'd grabbed the wrong set of keys, thus locking myself out of my own house. I live on the second floor of a duplex, so to successfully break into my house, I had to navigate my downstairs neighbors' front porch, climb onto the garage roof, and then hoist myself up and into my living room window-- which I'd thankfully had the bad sense not to lock. 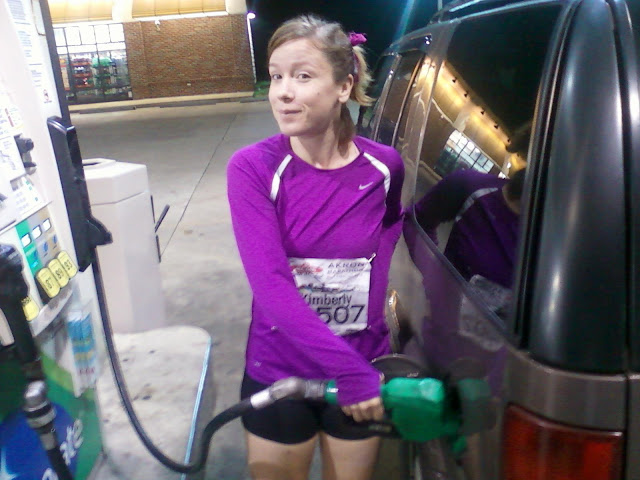 En route, I began to sail onto the wrong exit twice, which resulted in a 60mph baha back onto the highway, and with the exception of the moment of clarity during which the heavens parted and an angel said, "you're going 85 in a 55 zone", I drove so slow that I didn't come within walking distance of the event until 6:35. At that point, my sister Amy (who was there to support me) and I played Chinese Fire Drill, and swapped spots in the car at a red light; and I then began to traverse the long stretch leading to scores of port-o-potties that felt at that moment like an oasis in the desert. This, unfortunately, didn't work out well, and I abandon ship at 6:50 still needing to use the bathroom. I decided that even if it meant peeing my pants, I wasn't stopping for hell or high water this time.

With only 10 minutes to the start, I had the disappointing realization that there were 4059350843 people and spectators crowding an area the size of my bedroom closet, and I was never going to be able to find my friends the way I had at Cleveland. I'd decided I was going to start with the 3:40 marathon pace group and work my way ahead as the race progressed, but wandering toward the start, I could not find the sign poking above the sea of runners. I saw, off to my right, the 4:00 pace group, standing and chatting with some spectators a woman carrying a 3:55 sign, and ahead in the distance a 3:35 pace sign. With the minutes ticking down, and the pre-race final announcements and National Anthem starting, I made the decision to start with the latter. I messaged a friend who was supposed to be meeting me with the 3:40 pace group to let him know I was starting a bit ahead, and then before I knew it--we were off with a hurrah and an explosion of fireworks.

Almost immediately, I sensed something was "not right" about our pace. I was accustomed to having to start slow for a mile or two in these larger events and then accelerate to make up for lost time, but it felt like we were running very fast. I chalked it up to being out of shape, and hoped that, along with my having to pee, things would resolve themselves as the race progressed. I quickly discovered that my suspicion was valid when we reached the clock at the first mile in 8:49. I do not wear a watch, but I was certain we'd started at least 30 seconds back, if not a whole minute. That meant our "slow" first mile was actually nearly at race pace (8:12 for this pace group) if not much faster, despite weaving around the slower runners who often clog the course for the first couple miles. Our second mile was a bit slower-- 8:18, but our third mile dropped to 7:58, and our fourth mile was even faster.

George Themelis caught up with me on the fifth mile, and we ran together for the majority of the next 6 miles until the half and full marathons separated. During this time, my miles varied widely, ranging from 7:45 to 8:40 depending on elevation change. My ninth mile, for example, slumped to 8:40, and my tenth mile sped up to 7:49. Trying to keep up with the 3:35 pace group proved an incredible challenge, and for a while between about 8 and 11 miles, I temporarily lost sight of them. I enjoyed the up and downhills more than I expected. While I slowed to the mid-8 minute range on those miles with more climb, I flew through the descents. I did not stop at any of the water stations, relying solely on my own supply, and required no gels or other "energy" sources-- exclusively water. 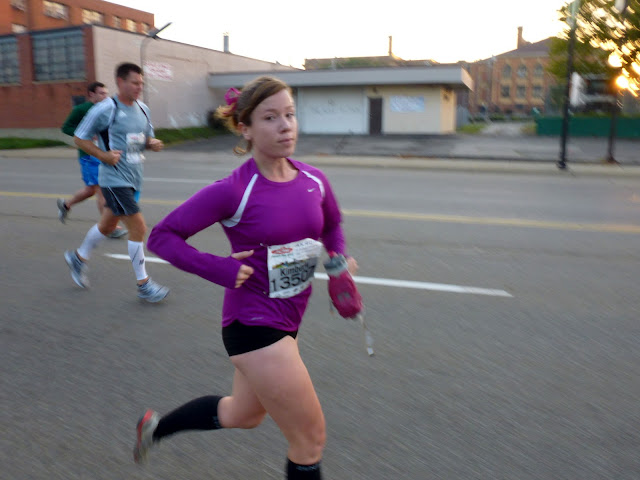 There is a turn around at some point around 11 miles after the half and full routes split, and it allows runners on the way out to see those on their way to the half finish. I looked for friends who might be behind me, but didn't see anyone I recognized. This race was unique in that aside from George, I did not see or run with any other friends, and talked very little. Even after the race was over, the only person with whom I chatted was Dan Daubner for a couple minutes.

My legs admittedly started to feel a bit worn down on the eleventh mile, and I slowed to one of my worst mile splits of the race on mile 12-- 8:43. I remember the mile split, but not precisely the time on the clock, though I recall seeing 1:39:xx and thinking I could feasibly run close to a 10 minute mile and still finish under 1:50-- without taking into consideration the lapse between clock and actual chip time (this would have actually made it possible to run nearly an 11 minute mile).  I don't know my 13th mile split, but it must have been pretty bad because I finished with the clock showing 1:48:40, which means it was likely a near match to my slow 8:43 preceding mile. This was exciting enough-- 1:48:40 was close to my 1:48:00 goal, and for a second or two I was overjoyed to have achieved this finish time. It was only after this initial sense of elation that I realized this was merely my clock time, and my chip time was actually faster. I popped out my phone which was set to receive facebook notifications when I reached each of the two relay stops as well as finish time, and expected to see a time just over the 1:48 mark, assuming I'd started 30-40 seconds back. Instead, it showed a chip time of 1:47:49!

Now, I have a rogue 2005 half marathon FA run of roughly 1:48, but that's hardly an official time. It was based on a route measured in a car, and timed by my kitchen clock minus a minute. So, my official PR prior to this race was 1:52:23 from Cleveland in 2011. A personal best of this magnitude was incredible! I was so happy I was on the verge of crying like a marathon virgin who had just finished their first 26.2, and wandered past Hugh Patton who handed me a medal and a lady who asked if I wanted a hat. I finally found Amy, who had managed to find her way into the stadium and capture a blurred photo of my finish. 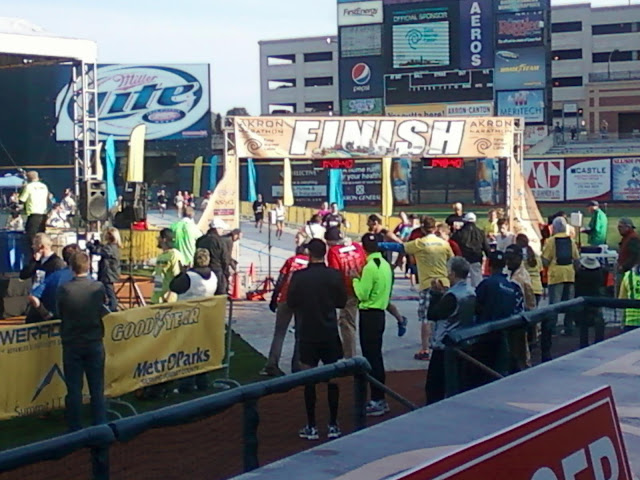 After a few photos, we started to leave since her daughter had a soccer game, but realized walking nearly a mile to my car that we weren't going to make it home in time. So, a call home and a bit more walking later, I was back in the stadium to see my marathon friends who now should have been finishing. Unfortunately, with the exception of Joe Jurczyk (Burning River 100 race director), I missed literally every single one of them-- coming back too late for a couple of them, and leaving too soon to see others I'd assumed had already finished.

On the way home, I had a 1/2 pound burger with extra bacon (no fries :) ) and a diet pepsi. My body felt great after the race, and I toyed with the idea of running the next day. I went for a walk with my children in the evening, and got a lot of rest. Final assessment: I love everything about this event. I'll be running the full marathon in Akron next year.

Cheers!
Posted by Kimberly Durst at 7:06 AM