Taking on the Towpath

I sat in the car at 6 am with my stomach in knots and my knees weak with anxiety. I've raced nearly 400 miles this year to a dozen finishes in races ranging from the oh-so-popular 5k all the way up to 100 miles, and yet this race provoked an emotional response that I hadn't experienced since college. I'd turned on the heat: a week after my 1:47:49 PR at the Akron Half Marathon I was going to race a sub-4 hour marathon. Now, for many, this probably reads like a joke. I mean, we're talking about a 3:59 marathon, not the Olympic trials...but on the ride to Peninsula that morning, it felt like I'd trained my whole life for this one race, and it was going to be a 'do or die trying' kind of experience. 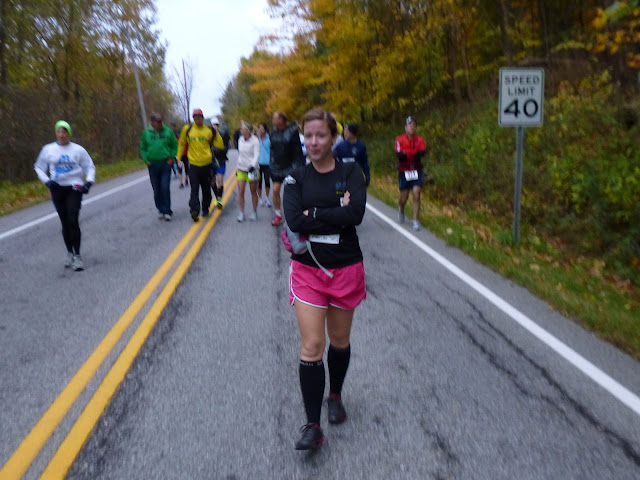 I lined up approximately 4-5 rows from the front alongside some familiar running pals: Burning River 100 race director Joe Jurczyk, George Themelis, Michael Shaffer, Dawn Harrison-Drasner, and Ben; and we took off all together for a two-mile run that rapidly fragmented into George and Michael flying ahead, Joe falling behind, Dawn stopping for the bathroom, and Ben slowly gaining seconds on me each mile. Dawn briefly caught me on the fourth mile, and I recall telling her my legs hadn't broken in yet, and then faded back again. I ran the rest of the race alone.

An irrational concern with pace set in early. I was disillusioned with our 8:19 first mile, recalling a 7:58 first mile at Akron that didn't seem to require nearly as much effort; and I was even more disenchanted with our 8:17 second mile. My legs felt heavy and strained by this effort, but I did not want to slow myself, convinced that a slow-down so early could seal my fate. Instead, I increased my speed in hope that it might "break in" my legs, something not entirely uncommon for me in longer races. My third mile, despite this effort, was even slower-- approximately 8:25. I could not seem to get comfortable, or find my race legs. I reached the fifth mile in 41:50 (8:22/mile), which seemed very slow. I wanted to run with the "magic" I had at Akron, but I just couldn't find it. In hindsight, I think I was as unrealistic in my expectation as I was foolish in even attempting to maintain such a fast pace. Anyway, by the time I'd covered double this distance, it was painfully obvious that my body was racing a half marathon while my mind was still running a marathon. Burning through the 10th mile in 1:24:50, I knew already I didn't have many fast miles left in me. A panic swept over me as the realization that I still had 16 miles left echoed through the aching in my hamstrings. Ben was a dot in the distance, clearly running at least a much faster first half than me, and my other friends had long faded ahead or behind. 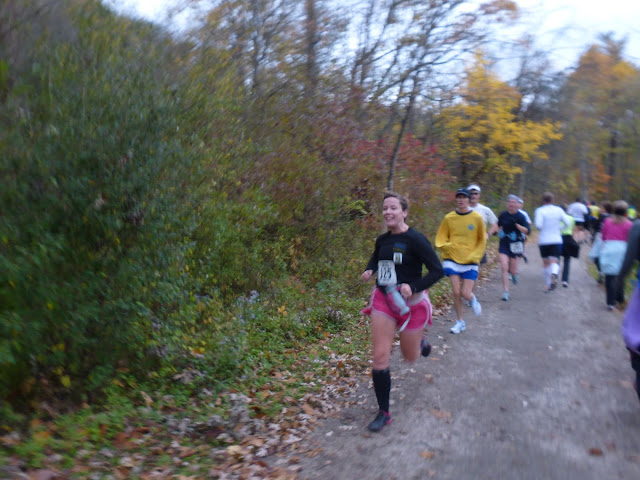 Prior to Akron, I had an official half marathon PR of 1:52:23 from Cleveland in 2011, 18 seconds slower than I covered the same distance during this race. It was a sad, scary realization that laughed at me in the form of thighs that felt like giant lead weights. I thanked all that might be perceived as divine that my bowels were not yet threatening to flank me with a surprise assault, and I was not yet inclined to walk, but I distinctly recall passing the 14 mile marker with a feeling of utter defeat. I had performed enough mental calculations to fill a three-subject notebook, and yet the confidence I had in even the ugliest of scenarios was now falling through the cracks faster than the speed of light.

I had a brief dance with confidence between miles 15 and 16, kind of like the remission that gives one a false sense of hope in the midst of terminal illness. By mile 18, however, my middle fingers were displayed toward each side of the beautiful trees lining the towpath like white flags o' surrender, hell approaching from behind with gusto keeping me one step ahead of the dreaded death march that stole my soul at Burning River. I began to wonder if I was ever going to catch Ben who, prior to the start and even at the halfway mark, I was certain I'd have long left walking in the dust. As I made my way closer and closer to the 20 mile mark, the mental math picked up pace until my mind was an overcrowded sea of figures and calculations. I concluded that, based on my rate of slowing, I needed to be as close to 3 hours as possible. I'd have 10k to finish, and moving like molasses, I would probably need most of that hour if I was going to finish in 3:59 or better. Slower than 3:02, and this goal became virtually impossible. I assured myself that if I was somehow lagging behind this cutoff, I could walk for a couple minutes, so I cursed my soul to Hades and beyond when I reached 20 miles in 2:59. I'd just sentenced myself to a 10k run.

At 21.5 miles, Ben came into view. It was apparent he was shuffling now, and looked like he'd probably been walking. I caught up with him as the course looped back toward the finish, and he had a look of defeat etched on his face. I wanted to tell him something like, "only 4 miles left!", but that's the sort of thing that pisses me off when I've hit a breaking point in a race. When you feel like you're spent, 4 miles is like that carrot dangled in front of a poor horse's nose. My 23rd mile was a torturous combination of muscle fatigue, mental anguish at the realization that walking was not and would not be an integral part of this race plan, and knowing that this was going to be the slowest 5k I'd ever run in its entirety since I was 8 months pregnant. I could see Michael Shaffer walking toward the 24 mile aid station, and tried hard to catch him, but as I started to approach, he began running again and it took the greater part of the next mile to finally catch up with him. I assumed he'd want to run the last mile and a half with me, but instead he continued walking, and I passed the 25 mile marker in approximately 3:48. 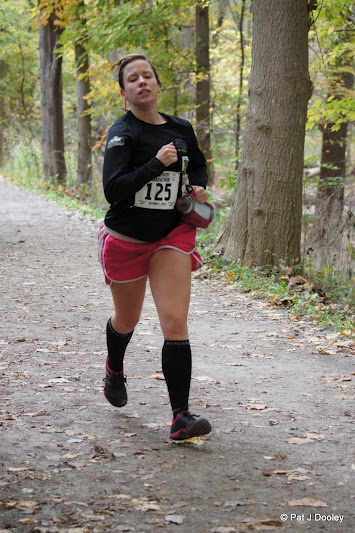 I was shocked by the number of people who were walking on the 26th mile, especially considering how close we were to a sub-4 hour finish, and despite the fact that I was running in what must have looked like cartoon character exaggerated form, I was picking off runners in droves up until the last third of a mile when the gas just ran out.  At that point, my cartoon character form turned into the cartoon character that realizes he's walked off a cliff and begins flapping his arms in utter futility: the check engine lights were flashing on this car, mind and body sending messages to each other that were obviously lost in translation, arms moving faster than my scuffling, shuffling legs. I had no idea just how ridiculous I looked, and frankly I didn't care either. Race finish photos show my head cocked back and mouth agape, legs contorted in some strange rendition of a Bojangles jig, veins protruding from my neck, face aflush and fists clenched. I was a sight to behold, barreling toward the finish line, but barrel across it I did in 3:58:29. My legs were buckling as I staggered past the gentleman passing out medals, and I sobbed like I'd won Olympic gold, crumbled in an ungraceful heap in a folding chair.

As it turned out, Michael finished about 2 minutes later, Ben in 4:09, and Joe in 4:12. George finished way ahead of us in 3:31, and an injury forced Dawn out of the race at 11 miles. The final verdict for me was 6/16 in my age group-- much worse than I fared at Cleveland, and 32/149 overall female. I'm looking forward to Cleveland next year where I can test myself at this distance again, hopefully this time with the good sense not take off with a body running a half marathon and a mind that has to carry the second half.
Posted by Kimberly Durst at 7:34 PM