I left my house in a hurry, and checked in at the packet pick-up with only a few minutes before it closed at 7:45-- late by my standards. I was still wearing the BR100 shirt I'd worn to bed the night before, and had barely eaten. I figured, "what the hell? so, it might take me 7 hours." I didn't "take off" at the start; I rolled across the line mid-pack in a jog. I lost some time waiting on the line of people in front of me to ascend an endless staircase into the next dimension, and loafed my way behind as many people as the course changed to single track. I had no interest in blowing out my energy on the first 15 miles, so I made no effort for about 5-6 miles to pass anyone.
I'd made my only official goal of the race to only have to stop for the bathroom twice, and used what turned out to be my only stop very early into the race-- somewhere between 6 and 8 miles where I encountered a lovely outhouse that had side by side holes cut out on the bench, apparently so that one might enjoy companionship while relieving oneself. I had a close call a few miles later, but a healthy cocktail of ginger ale and anti-acid chews sated my guts from expelling whatever was brewing with fury within. 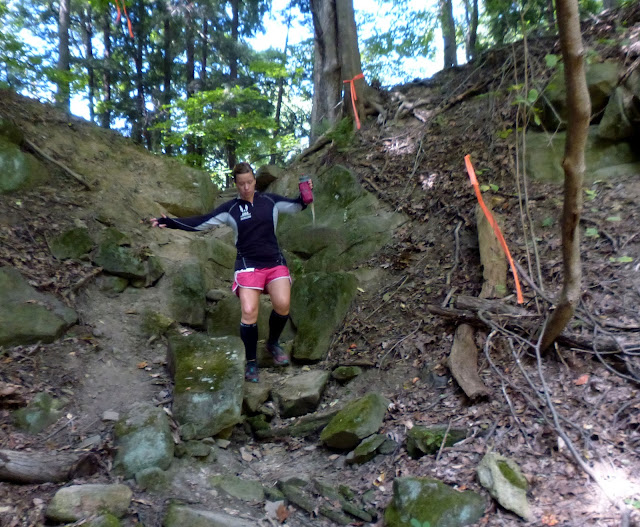 I maintained a comfortable pace throughout the remainder of the first 25k. There was a mix of rocks to ascend and descend, stairs, single track trail, some pavement, and some of the most beastly hills I've ever encountered. This course was easily more challenging than the Moebius 50k race I ran 3 weeks ago, and more challenging, in my opinion, than any 50k portion of the Burning River course. I reached the 25k mark in 3:06. I had no goal time in mind until later in the race, but I thought perhaps I was moving a bit slow. However, I'd been running every part of the course that was runnable, so I accepted that perhaps everyone else was running slow, too, and continued on at what felt like the same slow, steady pace. 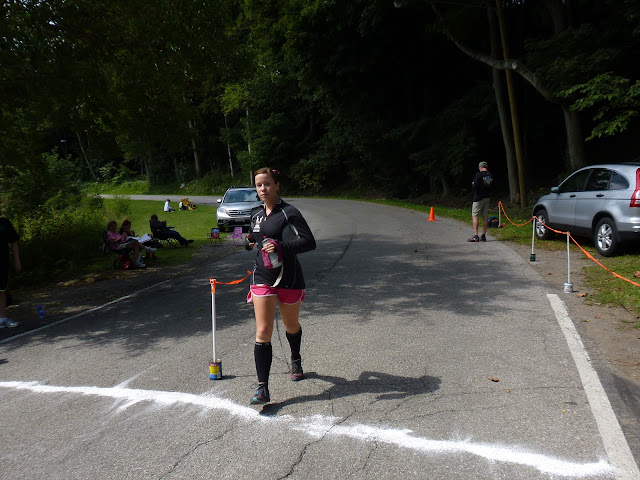 From this point onward, absolutely nobody passed me whatsoever. For someone who generally starts races, trail or road, like she's racing toward a new world record only to spend the last 2, 10, 80 miles being passed by the lady with a leashed dog, the man with the twin stroller, Santa Claus, and a gaggle of ten year-old children, this was rather incredible. I passed 5 people including a woman less than a quarter mile from the finish.
Surprisingly, my last loop (7.75 miles) was faster than the one before it by 4 minutes-- probably because George opted to run this one with me. My body started to feel very tired on this loop, and I was incredibly happy to see the finish line come into view. I ran faster on the final stretch, believing the above mentioned woman was going to break into a sprint, than I think I've run on any distance  over 5 miles,  finishing in 6:34:35, good enough for 4th place female overall out of 21 finishers. This was my best placement in any distance aside from local 5k's.
After the race, I had some potato chips and beer, and enjoyed the sunshine. :)
Posted by Kimberly Durst at 7:12 PM