It was a brisk, 42 degrees as I stepped out of the car and jogged down a long hill toward a corner where a row of ancient yellow school buses were waiting to cart me to the start of the Youngstown Peace Race 10k. Repeat: I jogged down a long hill. Remember this. After all, what goes down on a race course, generally has to come back up if there isn't a net elevation loss-- and believe me, there wasn't. I climbed onto the bus and traveled the distance to the start passing abandon houses with boarded windows, and one very special business that boasted both deli sandwiches and a full line of beauty supplies. Waiting for the announcement to head toward the starting line, running pal Matthew Mondello found me for a pre-race chat.
At the start, I felt relieved that this was only a 10k because, as usual, I had to pee. I'd eaten a light breakfast of ham and half of a low-carb chocolate muffin. My aching hamstring felt much improved, but my lack of training as a result of the strain still made me feel a bit apprehensive. I'd made my official goal 48:00, but I'd made it clear that any finish faster than an 8 minute pace would be one I'd chalk up as success.
The first mile of this race is almost entirely downhill. In theory, this is great because it enables one to get a nice start before the storm of hills catch up on mile 3. However, taking this downhill stretch too fast can backfire on the later hills, and I was acutely aware of this having run the Mill Creek Half Marathon in 2010. I covered the first mile in 7:08, which felt fast but good, and reached the 2 mile marker in 14:24. While I recognized that my time was a little faster than usual, I knew that shortly I'd reach the first big hill. I was not disappointed. I slowed to 8:10 on this mile, and reached the 5k mark in 23:18.
Concern that I was going to slow significantly temporarily went into remission as I covered the 4th mile in 7:40, reaching the mile marker in 30:14. The fifth and sixth miles, unfortunately, showcased a couple more sizeable hills that slowly sucked my soul as thoroughly as they sucked the strength out of my legs. Despite this, I achieved a new 5 mile PR en route (38:14-- previous PR from 2009 was 38:17), and despite maintaining the Burning River shuffle up the final ascent heading toward the Federal Plaza, I reached the 6 mile marker in 46:33. The last quarter mile was a tired jog, not realizing at the time that it actually took 10 seconds for me to reach the start rather than the 4-5 seconds I assumed it took, and seeing the clock tick from 47:59 to 48:00, 48:01, 48:02... I realized I was not going to achieve my goal. I crossed with a clock time of 48:15, and what I later learned was a chip time of 48:05. Discovering I was a mere second per mile slower than the 7:44 pace I needed to cover the distance under 48:00 was disappointing. 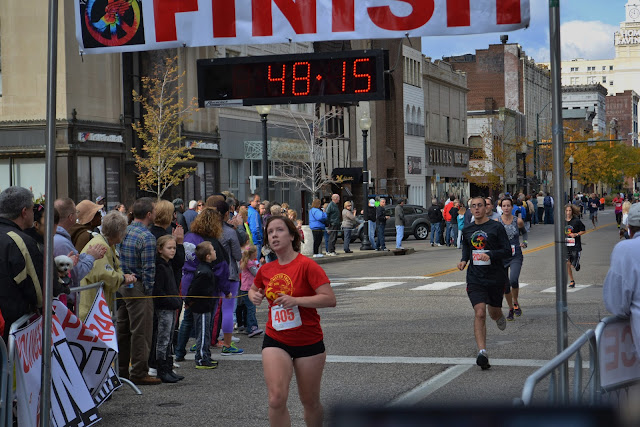