Running with Scissors (in a poop and mud soup)

There I was, sloshing through puddles that were nearly shin deep, staring at a muddy hill that looked slicker than an icy road after a hard freezing rain. I was tired. My newest pair of New Balance Minimus trail shoes-- elevated to divine necessity status, were no longer distinguishable. The entire span of my legs below knee level were covered with a heavy paste of mud; and my hands-- exposed to elements of cold and freezing rain, were swollen and red. I was at a crossroad, mentally. I could either make a last real go at running aggressively and try to salvage what was left of the last eight miles, or I could just start walking and wish for the best.

Rewind eighteen miles, and I was sitting twenty feet from a roaring fire, waiting for the final announcements to be given by none other than the legendary Roy Heger who was styling a grim reaper costume (complete with a real cigar) that looked very convincing. This was the Run with Scissors marathon, the middle distance of the trio of trail races run at that day, and one that utilized a healthy portion of the Burning River 100 course-- coincidentally the parts that occurred in the 70-85 mile range during which I'd transformed into a hallucinating shell of a person running (or walking) completely on auto-pilot. After grabbing my plastic scissors and stuffing them in the zip-pocket of my handheld bottle, I moved out of the lodge and toward a starting line that wasn't a starting line at all, but the end of the cement where the grass gave way to the woods. It was cold, and it was raining.

I was admittedly more enthusiastic than I probably should have been, especially after having raced a rather fast 5k the night before. In fact, "rather fast" doesn't really do justice for my effort considering it was equally cold and rainy with the added bonus of wind... and I ran my first mile in 6:40. I finished in 21:58, 3rd of 53 women, and went to bed with the legs of a runner who'd just worked very hard. Standing at the starting point, I was completely unmoved by this. 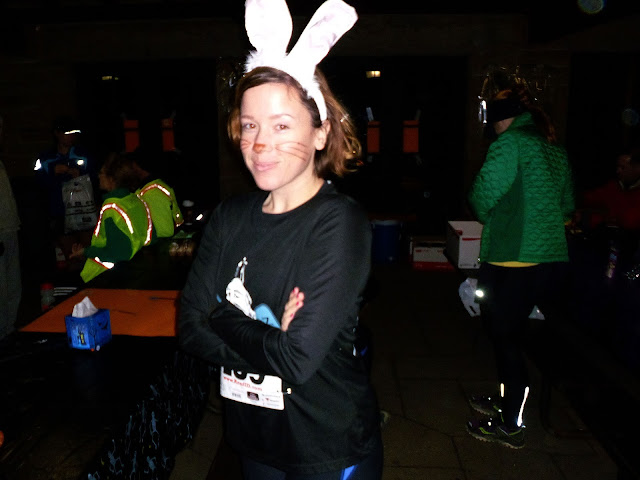 I started the race with a wig and skirt clad George Themelis, a pair of twins who wore identical and self-identifying orange shirts, and Glenn Dumonthier the hobbit. The first three miles were on very runnable trails, and I covered them in under 30 minutes. I continued moving, at a 10 minute pace, to the first aid station where Dan Bellinger and others had a nice spread of food prepared. He informed me that I was second overall female, only about 90 seconds behind the leader, Joan Cottril. I was off like a flash, knowing I likely wouldn't catch her, and knowing the trails were going to get worse-- much worse. The ground remained very runnable for approximately a mile into the Wetmore trail before it rapidly transformed into large stretches of slimy, thick, pasty mud that sucked hard at my shoes. Attempting to run on the sides of this mess was impossible, unless one preferred the wrath of the thorny bushes that nicely fenced the trail from the woods.

As I approached the eleven mile mark, Jeanine Nicholson and Marsha Clifford zoomed past me like I was standing idle, pushing me back to 4th place. I tried hard to keep up-- or catch up, but despite the jerking running man tread I was executing, it was taking more effort just to stay vertical than to move forward, and within a half mile, they were barely within sight. I reached the halfway point in approximately 2:23, just under 11 minutes per mile. Reality started to set in: I'd covered the last 10k at a 12 minute pace, even though I'd been running virtually all of it.

Moving onto the Perkins loop was an unexpected relief. Approaching the trail head, visions danced in my head of traversing this stretch in the middle of the night at Burning River, alone and without a sound mind, desperate for company or a tranquilizer powerful enough to sedate a horse-- either would have been a tremendous relief. On this day, the Perkins loop meant a temporary reprieve from the stew of mud, leaves, rocks, grass, and horse poop that was brewing on the Wetmore trail. I ran the flat and downhill portions, and walked uphill. Rachel Nypaver and Steve Hawthorne passed me on mile 16, but my attempt to keep up with them didn't even last a quarter mile. I was content to run my own race, slow and hideous as it might be. I plowed toward the Covered Bridge aid station behind Glenn, and then ran into the thorny grips of a cold, muddy, rainy hell. And, it was a hell with hills-- big ones. I was only on my eighteenth mile, but I'd been on the trail for nearly four hours. Ahead of me, beyond a long stretch of Double Dare style mud, waiting patiently, was a sloppy incline to the stars.

And so, there I was, sloshing through puddles that went nearly shin deep, staring at a muddy hill that looked slicker than an icy road after a hard freezing rain. I was tired. My newest pair of New Balance Minimus trail shoes-- elevated to divine necessity status, were no longer distinguishable. The better part of my legs below the knee were covered with a heavy paste of mud, and my hands-- exposed to elements of cold and freezing rain, were swollen and red. I was at a crossroad, mentally. I could either make a last real go at running aggressively and try to salvage what was left of the last eight miles, or I could just start walking and wish for the best.

To an elite runner, or a spectator at home watching from the comfort of their couch, I'm sure it didn't look like I was running. But, I was running. This was my last hurrah, my last big break for triumph. Aside from Rob Powell, there was nobody within sight, and except when he stopped to walk for a couple minutes, I really wasn't even running with Rob. Instead, I had my treadmill/running man/water treader/break dancer forward motion set on full throttle mode, and in a fury of lurches and flailing arms, I was progressing toward the finish in style. The last aid station came into view after what felt like an eon, and to my surprise I learned there were only two miles remaining. Unfortunately, I also learned that an entire pack of runners were rapidly approaching, and moving as I had been, if I didn't push myself back into gear they were all going to pass me shortly. It occurred to me that I'd probably descend the first of the grassy hills faster if I just tucked and rolled, but I kept my big girl pants on and ran down instead, slower than molasses. Hearing the voices behind me grow louder and louder, I realized they were moving faster than I was. So, with my arms pumping and a look of determination that probably looked a lot like this: 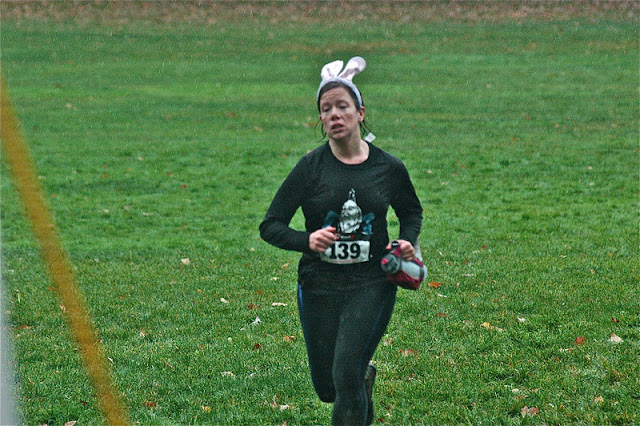 I blazed up part deux of the hills as fast as I could will my legs to carry me. It wasn't pretty. Back onto easier trails, I tried to dig deep for speed, but I just could not summon it. I could tell there were several people following closely, including another lady. I refused to be passed. At once, the speed I'd been seeking for the past seven miles finally answered, and the eleven minute mile from heaven met me with the enthusiasm of a lottery winner. And, just like that, the finish came into view: 5 hours and 26 minutes after embarking on this adventure, I crossed the finish line 5th of 27 women and 22nd of 66 runners: 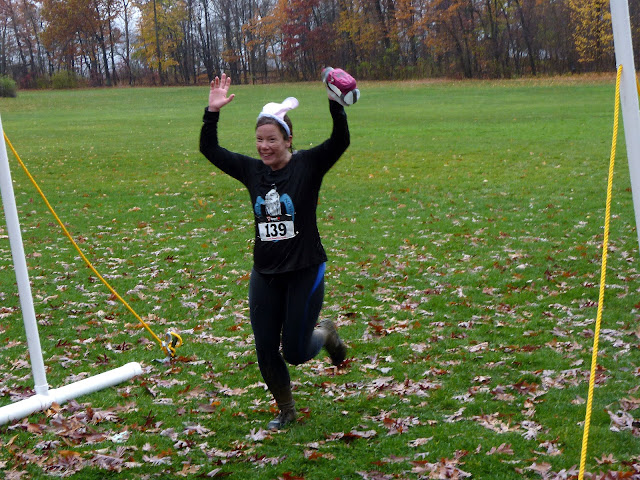 The post-race festivities included a philly steak wrap, hot soup, and a long retreat on a large plastic storage tub in front of what felt like the best roaring fire I'd ever experienced. In fact, having neglected to bring fresh clothes and shoes, I was inclined to sit on that plastic storage tub in front of the fire until I received an eviction notice. It was there that I learned nearly half of the double marathon runners had dropped after completing the first marathon, and during this time the first of the double marathon finishers, Hugh Patton, completed the 52 mile distance. Next year I intend to run the longer distance.

There is a lot for me to learn, still, about trail racing. There is a certain amount of mental preparation that I think only comes from having experienced a good lashing from the elements, and it simply cannot be achieved any other way-- least of all via ten mile road runs. Anyone can walk a trail, but not everyone can race a trail well. But, in time, I hope to be one of them.