In the conventional sense, it isn't a race. It's a run, and it's an event, and it's a damn good test of endurance. The atmosphere is light and comedic thanks to the Bills: the wild and the chef-- the heart of the event, and the runners are mostly friends: newbies to ultra running and seasoned veterans, traversing a challenging loop before ascending a series of stairs and a seemingly endless uphill before finishing in style, flying back downstairs and then crossing a road, complete with traffic, to snag a t-shirt, bumper sticker, personalized dog tag, and the right to call oneself a bad ass. And, most importantly, all of this happens to promote trail running in the area. There's no entry fee, so money raised for the park and trail network is the result of donations and raffles. It's a one-of-a-kind running event.

One of the most remarkable aspects of my experience at Bill's Bad Ass 50k was simply my utter lack of training. I've admittedly fallen off the wagon in terms of weekly mileage-- in part because of circumstances, and in part because I've been seriously lacking motivation to run more than 6-8 miles at a time. So, that's how the last 2 weeks played out: 20 mile weeks that consisted of perhaps a 10 mile "long run" (yes, I just described my former tempo run distance as being "long") and then two 5-milers. I've done no speed work, no hill work. Hell, despite my claim that I was born to run them, I hadn't even touched a trail since Run with Scissors. However, I had an irrational confidence heading into this event that blared like Wild Bill's bull horn that I was going to do really, really well. I made a loose, somewhat insignificant goal of 6:25, but secretly planned to run at an hour-per-loop pace for a 6:12-6:14 finish (knowing the last mile was half upstairs, literally). Race or non-race, I'd be lying to claim I didn't care enough to try my best.

I ate a breakfast of seasoned meat, cheese, string beans and mashed cauliflower with butter and sour cream (a low-carb Shepherd's pie that was absolutely delicious), and then-- thank God, went to the bathroom twice. (I'd apologize for the awkwardness of that statement, except that this can be a serious problem for me mid-race, sometimes in the middle of a very long loop.) Anyway, I arrived at 7:30 with my sister, Heidi, filled my water bottle, and after saying 'hello' to some friends, prepared myself for the run. 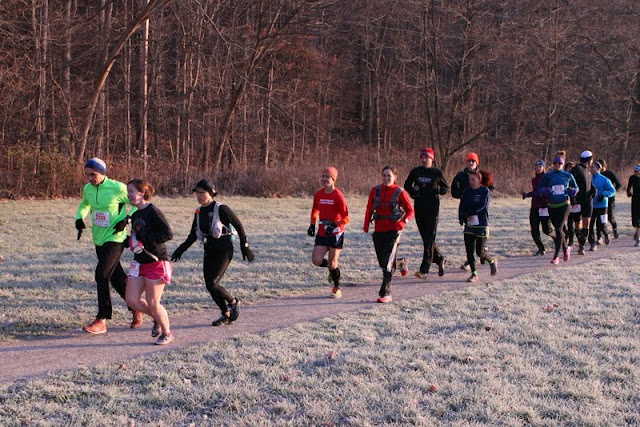 We started the 50k run at 8am on frost-covered trails. (photo by Mark Shelton)

Despite the lack of training, I had no problem settling into a rather fast (for this course) 10:30 pace, and right away found myself tied for first female after ten miles. The grueling hills, a trademark of this event, started to take their toll on the third of the six 5-mile loops, and I slowed to my goal pace, finishing the loop in exactly an hour. I knew my recent weight gain teemed with low mileage contributed to the fatigue that had settled in my legs (and mind), but I was still determined to make this run a good one. I'd fallen behind Nina Fukuzato at the end of the third loop, though she was still within sight, but was surprised when Jane Timmons dashed past me early into the fourth loop. Now tired and in third place, I began to wonder if I'd find a second wind or if this disappointment was going to be magnified in the last 3 loops. I was still confident I could run the downhill portions and some of the flat stretches, so I knew I should be able to finish under 6:30, but I worried that, like so many other times, the temptation to walk just a little longer would not sneak a surprise assault. My pace on the fourth loop was terrible-- it took 1:05 to complete it, or 13 min/mile.

Now, at this point I felt exhausted. I was beyond beating myself up over the poor training and weight gain, and just wanted something to slap me in the face, so to speak, to give me some pep. In a shameful moment of low-carb betrayal, I grabbed a pile of Swedish fish and stuffed them in my cheeks, chasing the sugary, pasty mess with two cups of ginger ale. It was horrific, akin to my 24.5 mile sugar overload at Green Jewel 50k in March, albeit in a lesser quantity. It admittedly gave me the zing I was seeking in the moment of weakness, and I made an honest effort at running fast again, heading onto the trail in the fifth loop. Midway though it, I realized I was rapidly gaining ground on Nina which gave me an even greater jolt-- this one of confidence. I passed her, and started running hard, hoping to create a gap that would be difficult to close with so little time remaining. I knew Jane was ahead of me, but hadn't any idea how far; and for a long time found myself daydreaming about finishing first female. It was on this loop that Brad Polman and George Themelis passed me, the only two runners who would lap me. From the time I reached the aid station after the fourth loop until I reached it again after this one, 1:09 passed. My total time was 5:00. 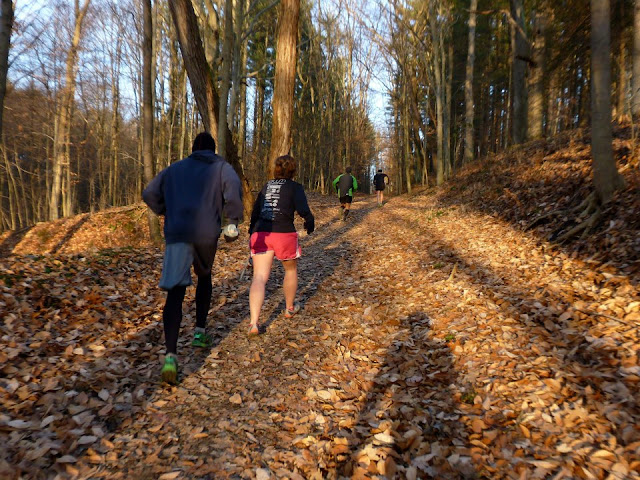 grueling march up a long hill

Knowing I was in second place, and had found a reserve supply of energy deep within myself, I took off as quickly as I could on the final loop. My legs felt completely worn down to the marrow, but I knew I was going to have a good finish. Running strong, I was shocked when Terri Lemke seemingly came out of nowhere to pass me with only 3 miles remaining. I knew when she charged past me that with the strength she had to catch me and then pass me that there was no way I was going to be able to keep up. I was running as hard as I could, and she had no problem eclipsing my pace. By the time I closed in on the Covered Bridge, she was completely out of sight. A glance at my phone indicated 6:01 had passed. I took to the stairs that extended up, up, and then up some more as a part of an uphill stretch that continued for a half mile, the best I could at this stage: I walked. A two-step dash sent my legs into a fiery panic, so I gritted my teeth and plowed up, hoping for the best. Walking the entire half mile into Heaven took a painful 9 minutes, and by the time I located the bucket filled with fireballs (a unique tradition in this event-- each runner, after completing the six 5-mile loops has to ascend the stairs and hill for a half mile and collect a piece of candy from a bucket as proof they're not a candy ass and actually covered the full distance) I was ready to scream hallelujah, and probably would have if it wouldn't have stripped me of even more energy and oxygen. The descent was much easier, and by the time I reached the bottom of the stairs I was flying. I finished in 6:15 for third place overall female, achieving a trail PR by nineteen minutes-- a huge improvement, especially after training like a recreational jogger for weeks! 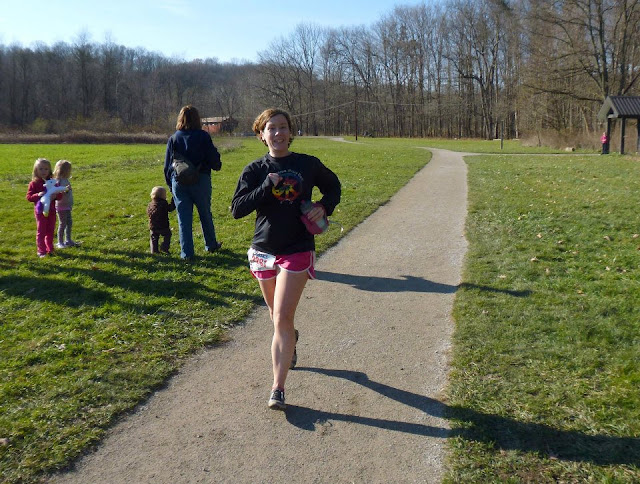 After having done so well, I'm prepared to kick my training back up a notch. This experience was a wake-up call that I have potential I did not fully realize, at something I truly love: ultra trail running; and, that if I take it more serious, who knows what I am capable of achieving? 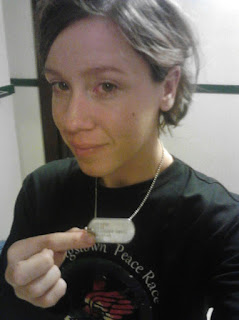 Posted by Kimberly Durst at 4:37 AM