Run for Regis 2013: When the Trail Bites Back

Picture this: 62 degrees, a nice morning breeze, gorgeous trails, and all of your running friends gathered for an annual 50k-- in mid-January. It sounds like a recipe for a PR for someone fond of both the trails and distance involved (not to mention the ideal temperature), except that under that facade of beauty, those trails were a death trap of mud and, somehow, even ice in certain spots. Clad in my trademark pink shorts and short sleeved shirt, I realize, in hindsight, that I didn't even have a game plan as I towed the starting line. After saying hello to Michael Semick, Michele Fortuna, George Themelis, Michael Schaffer, and countless other runners I'd met at training runs and events leading up to Burning River 100, I was as ready as I was going to get... and that wasn't saying much.

The Run for Regis 1/2 marathon and 50k started together, albeit traveling in opposite directions as they headed into the trail. The race consists of two loops: one that is approximately 5 miles and is identified by green flags and streamers, and another that is approximately 8 miles; this one has orange flags and streamers. Half marathoners start with the longer 8 mile loop, and 50k runners start with the 5 mile loop and then alternate, covering the short loop three times and the long loop twice. With so many runners, the park required a staggered start, determined by bib numbers that were assigned alphabetically. I started with the second wave of runners.

I took off fast with a pair of girls who were, I quickly realized, much faster runners than me. I kept up for about 3/4 mile before abandoning the effort, and decided it was worth it to run at a more comfortable pace. That moment, I believe, was the only moment of real "strategy". And, from that point forward I descended, by the mile, further and further into misery. I do not think there was anything anyone could have done to remedy the situation. Typically it takes at least 10 miles in adverse conditions before I begin cursing under my breath, but on that day it only took 2. I tried to draw a parallel several times between what I was experiencing and Run with Scissors, but I couldn't focus long enough to really absorb the thought. I think this contributed to what transpired over the next few miles. Somehow, photographer Mark Shelton managed to capture this rare smiling moment around mile 4: 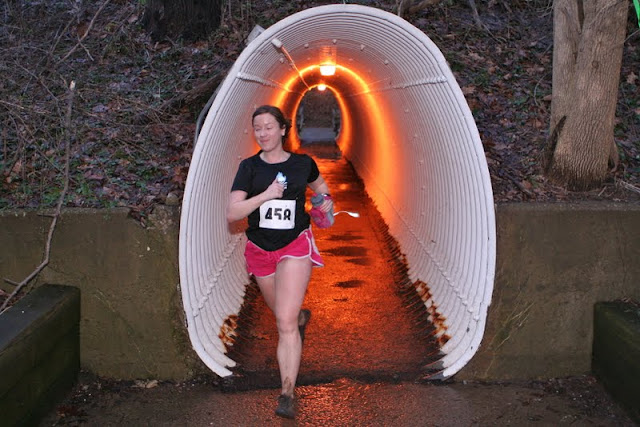 I covered the first 5 mile loop in just under 50 minutes, or roughly a 10 minute pace. Despite the mud that was sucking at my shoes for miles up and down hills, I expected to find myself running at a faster pace, and I was as shocked as I was dismayed when Hugh Patton passed me a mere 3 miles into the run, and then George passed me at the end of this first loop. My legs felt a bit tired, which I chalked up to recent trips to the gym that included foolish indulgences on the treadmill at the fastest pace I could muster (I ran 3 miles in 19:54 the morning before the race, for example). However, I took off toward the orange flagged trail with hope that I'd soon start feeling a little more optimistic about what I was doing. It just didn't happen. Not long after I started this loop, I caught up with Charlie Bolek and spent the vast majority of the first half running and chatting with him. While this kept me moving forward-- and kept my mind occupied, it was short-lived. After reaching the aid station at the mid-point at Pine Hollow (also an aid station at Burning River), I lost track of Charlie, and found the muddy trail more miserable than ever. I actually began to seek sections like this one  (photo courtesy of Cyrus Taylor), because they cleaned the mud from my shoes: 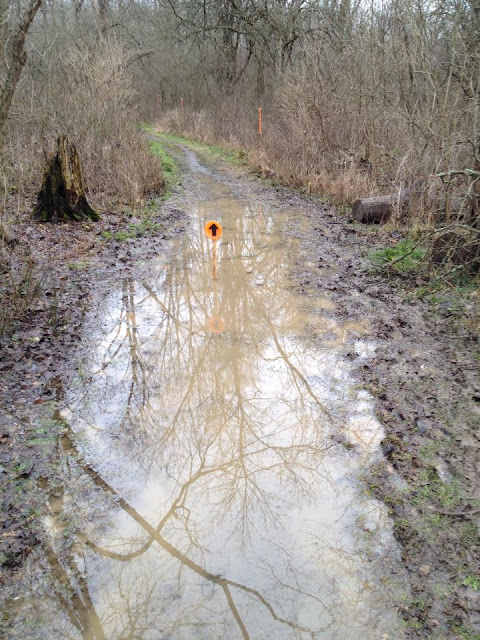 I ran for a few miles with Sean Hensley, and then finished the loop alone for a net time of roughly 2:35. I felt terrible, but had resolve to go back out because it felt like the right thing to do. I wasn't comfortable with driving for an hour to run 13 miles, and I felt like I had a bit more strength left in me. It took little more than a mile for me to change my mind, and that strength cleared like smoke. Charlie passed me again, and then George passed me traveling in the opposite direction on his way back before starting the long loop again. He looked much happier than I was, and wished me good luck. At some point during this loop, my shoe stuck so hard into the mud that when I pulled it free, my sock was pulled down into the shoe. I made a half-assed last minute "pact" with myself that if I'd somehow managed to pull off a miraculous hour or less execution of this loop I'd continue onward for another 8 miles. I knew it was a long shot, and didn't let myself down: it took an hour and 10 minutes. Utilizing the Burning River Shuffle, I made my way out of the trail and turned the corner for the final straightaway with a fork in my back like a Thanksgiving turkey. And, that was it: I threw in the towel at 18 miles.

While it didn't count as a true DNF, and frankly I didn't care enough to get upset or disappointed, there is a bit of personal dissatisfaction that accompanies falling short of what I'd set out to accomplish. But, it's January. I have a full schedule ahead of me this year that includes 8 more 50k's in addition to two 100's, a 24 hour, and a 100k. It isn't over. Not even close... 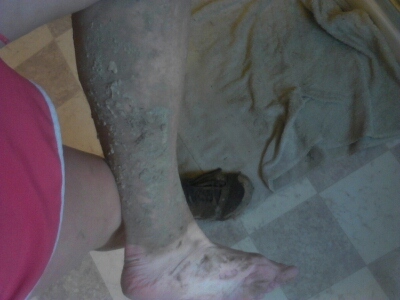 Posted by Kimberly Durst at 7:21 PM