I have been running ultra marathons for exactly one year. In fact, a year ago today I was standing, shivering, in the ugliest get-up in which I've ever appeared in a competitive running event, waiting nervously for the start of the one that started it all: the Green Jewel 50k. Yesterday, five 50k's, one 10 hour run, a 50 and 100 miler later, I was back. I would celebrate my ultra running anniversary in ultra running style, albeit a day early.

I have been blasting my PR's, one after another, since the Youngstown 50k in September, and was prepared for a big one at Green Jewel. Having finally broken the 4 hour mark at the Towpath Marathon in October, I was confident in the weeks leading up to this event that I was capable of finishing under 5 hours at this 50k. Unfortunately, as the bus that shuttled runners from the finish to the start of the race made its way down the road, I realized that it had snowed a lot more in Rocky River and Brecksville than it had in Warren-- only an hour away. Last year, by comparison, the course was dry; and, although it was cold and windy (mid-30's, if I remember correctly), conditions were still favorable. Snowing, windy, and in the 20's, we took off on the well-packed snow covered all purpose trail at 9am. I knew within a mile that 5 hours was going to be very unlikely.

The first 10 miles were uneventful. I started the race with Ben, lost him when I stopped to use the bathroom during the 7th mile, and then caught him again at the mile 10 aid station. The time split shows I was averaging 8:27 at this point, which would have been a lovely pipe dream and much more conducive to my 5 hour goal. In reality, I was averaging about 9:10. However, I was struggling to even maintain this pace, wearing my NB Minimus trail shoes on the snowy pavement, and knew that I was going to slow down big time when Hell opened its mouth to swallow me around The Chalet at mile 19, the point at which I start to grow increasingly anxious by the quarter mile, frustrated by the distance that remains, physically tired, and rapidly deteriorating mentally as the direct result of the frustration and exhaustion. (Side note: this happened, curiously, around mile 33 at the Mohican 50, and 60-65 at Burning River.)

The second 10 miles were torturous. We didn't pass anyone during the vast majority of this stretch, and nobody passed us either, so even though we'd slowed to about a 10 minute pace, shuffling along the snow, apparently others had slowed at the same rate. Anne McClain left the aid station before Ben and I did, and we spent miles following her on the way to the hill at Ridge Road. I was finally reduced to walking on a short "hill" around mile 23, and then a mile later on The Hill leading up to the Ridge Road aid station. I was exhausted at this point from the effort of running on shoes utterly lacking in tread over mile after mile of snow, but greatly relieved to see that Andrew Gordon was waiting for me at the aid station for a 6.5 mile run to the finish. As the physical and mental discomfort of 25 miles in sub-freezing, snowy conditions had left Ben without much to say at this stage in the race, it was a welcome relief to run with someone who was fresh and ready to run and didn't have miles of misery on his feet and in his head.

The last 6.5 miles were, despite the company, the slowest for me. There were two more hills up which I was again reduced to walking, and it was on the last of these hills that Kali Price passed me, followed shortly thereafter by Brenda Runion. In retrospect, I wish I'd have run these hills because I'd have shaved several minutes from my finish time. Nonetheless, the last mile was probably one of my fastest of the entire race. As I do not wear a watch/Garmin, I had no idea  precisely how fast I was running, but I assume it was likely in the upper-8 minute range. I crossed the finish line in 5:20:11, missing my 5-hour target by a landslide but still crushing last year's time by 23 minutes-- a huge PR. 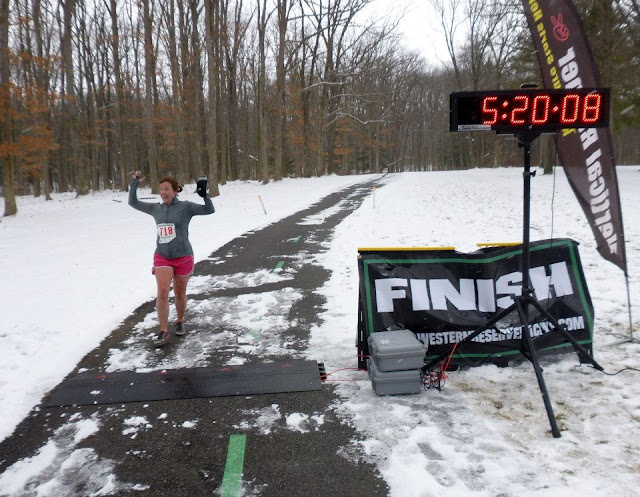 As nutrition and foot care have been huge issues in past races, it is interesting to note that I wore old, cheap socks and my NB Minimus trail shoes sans Vaseline. This was probably not the best move, but my feet fared very well with no new blisters or any other problems. In regard to nutrition, I consumed far fewer calories, carbs, and sugar than I did last year. In comparison, last year I blew through at least 6 gels, several cookies, M&M's, pop, and had my water bottles filled with gatorade. This year, I drank only water with the exception of ginger ale at Ridge Road; and, I consumed only 1/2 of an energy bar, a fig newton, and 1/2 of an apple cinnamon Hammer gel. My stomach also fared very well. I consumed a very light breakfast prior to the race consisting only of a few almonds and an apple.

With a year packed full of ultras including a 24 hour race and two 100 milers, I'm eager to get back out onto trails in preparation for my next 50k in three weeks. And with each new PR, I'm full of optimism, looking forward to making and breaking new goals.


* Here is a link to last year's report:
http://talks1nmathsdeux.blogspot.com/2012/03/race-report-green-jewel-50k.html