Out with the Old and in with the New-- Distances and Records, of Course!

It isn't everyday that I get to challenge myself at a new distance, especially nowadays when I've somewhat run the gamut on race distances. However, so far this month I've had the pleasure of expanding my horizon twice-- first with my disastrous 25k trail race last week, and this past weekend at the Cleveland Spring Classic 10 mile (a road race). Having done absolutely no speed training in more than a month, I felt like I was playing a game of Russian roulette with potential outcomes-- and considering Murphy's Law dictates my life, I was going to bite the bullet. Nonetheless, I declared to all and sundry that I was going to break 1:20, even though secretly I knew it was going to have to be snowing rather heavily in hell for me to even come within a minute of that. I've gained some weight and tipped the scale at 139 Sunday morning, and my guts felt like a ninja attack was bound to strike somewhere between mile 3 and 9.

Conditions were favorable, though, I noted, trotting a nice mile warm up after registering (race day registration—something I never do), for fast running. Having seen the previous year's results, and after talking to another running friend who was hoping for a similar finish time, I decided that I'd stick with her unless she started to fall behind. I didn't wear a watch, and there were no timers or timing system at the mile markers, so I winged it in regard to pace. My brain has always been a reasonably reliable tool at calculating pace and distance, so after passing the first couple miles and this other lady, Heidi, wasn't slowing down, I assumed we were on target since I could hear her watch sounding each mile. My speed-rusty out of shape thighs told me these were definitely not much faster than 8 minute miles, and I kept on keeping on, like I was following orders from the section in How to Survive 101 Calamities that instructs the reader to stick out his elbows in a crowded room during an emergency and let the crowd carry him. My elbows were out, and I was floating along her pace for dear life. 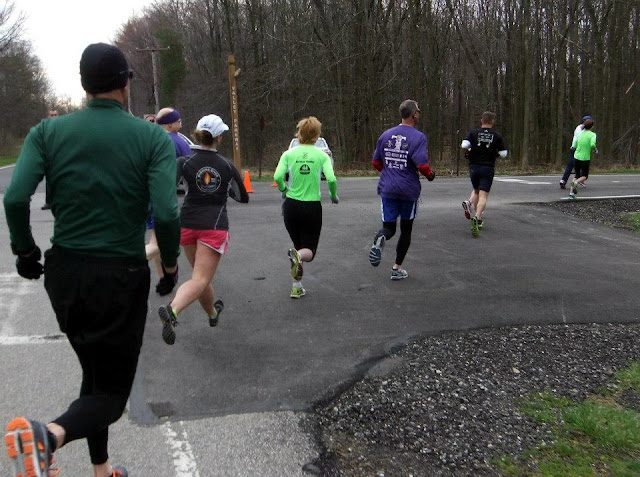 following Heidi Finniff (in green) early in the race

I was surprised at the halfway point that I was not tiring. My legs felt no worse than they did at 2 miles, and my unofficial pacer did not seem to be slowing down either; in face, the distance between us seemed to be increasing. I sailed past the 6 mile marker and into the finishing area where we steered left to start a shorter second loop. I wasn't sure the precise distance at this point, but estimated it to be about 6.3 miles en route, the time clock indicating 50:22 had passed. This confirmed my belief that I was maintaining roughly an 8 minute pace, and I focused on keeping this up for as long as I could. My legs finally started to wear down around the 8 mile mark. I was 5th overall female at this point, but Heidi had opened the gap between us even further, and there were several ladies very close behind me. Two of them passed me at about 8.5 miles and a third on the last mile.

In hindsight, I must have been slowing down for three women to pass me during these last two miles, but I felt as fast (albeit tired) as I did miles before-- and as strong. Rounding the last corner, I believed up until the last stretch that I was going to finish just over an 8 minute pace. From a distance, I could see the clock and thought it was ticking 1:20:50, 1:20:51, etc. when in reality it was counting 1:16:50, 1:16:51...! This was an unbelievable surprise! I charged through in 1:17:04 to finish 8th overall female, 3rd in the 30-34 division (the two ladies that passed me were 1st and 2nd). I absolutely did NOT expect to maintain a 7:42 pace for 10 miles, and almost immediately I began calculating to what this would translate in a half marathon (even slowing down to 9 minute miles, I would have finished in 1:44-- a huge PR), and began dreaming of super fast marathons. 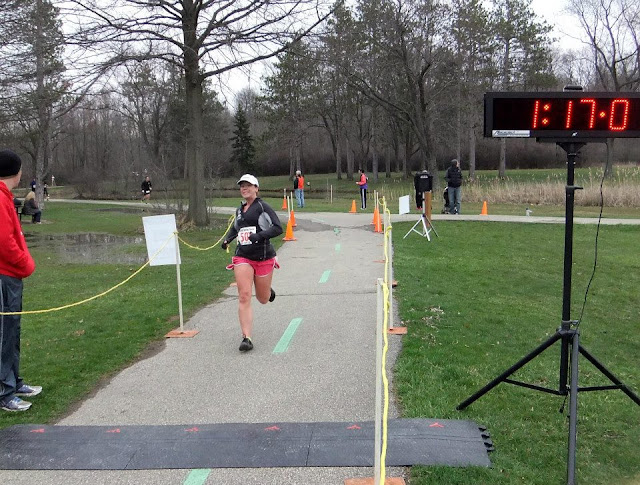 A day later, I am excited to head out for some miles in the most beautiful weather we have seen in months in . I have decided not to taper for my 24 hour trail race in 2 weeks (O24; I ran for 10 hours there last year). Instead, I will race a local 5k on Saturday, and then head out for 10-15 miles on trails the following morning. I'm shooting for 100 miles at O24, but I won't be heartbroken if it doesn't happen since there is a nice 100k medal, and 100k is another distance I've never technically raced. I expect to run between 85 and 95 miles at O24.