The Good, the Bad, and the Ugly-- Ultra Style


Since Burning River last summer, I've found myself desperately wanting to title almost every ultra race report following my many events the ever so lovely Clint Eastwood film title, "The Good, the Bad and the Ugly". Having refrained from using it for at least a couple months (I've convinced myself of this; I haven't actually checked), I decided after my, well, "unique" experience at the Fools 50k, what better race to use it? Hell, it was 65 and sunny, my split at the 25k mark counted as a final race result, and I nearly puked a gas tanker worth of neon yellow liquid as I was doubled over with my shirt off and belly hanging over my skirt, sweating like a beast, face red, hair stringy, eyes bulging. Indeed, folks. Beautiful weather? Check. Less than stellar finish time? Check. And I think my description of what I looked like after 25k should suffice to satisfy the last of the "Good, Bad and the Ugly" criteria.

The day started out great. I lined up for a nice picture with two of my ultra running pals: Andrew Gordon (who will be pacing me at Mohican 100) and Dawn Harrison-Drasner who has dubbed herself my "running mom". 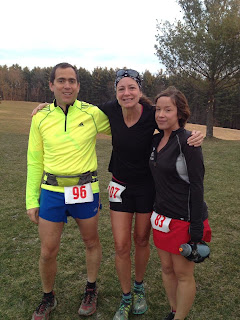 I wandered around with George Themelis, talked to some other friends-- John DeCalzo, Zack Johnson, Margie Kost, and prepared for what should have been a reasonably relaxed, enjoyable 50k in what I believed were ideal weather conditions. It was about 52F at the start and slightly cloudy, and I started out feeling pretty good as we made our way across the grass and into the woods. My legs are always a little rusty for the first 3-5 miles, and I made a mental note of this around mile 3-4 when I realized I wasn't feeling up to par; and sure enough-- not long after passing the 5 mile mark, I realized I was flying and feeling great. I was in 4th place after mile 2 and stayed there until mile 15; aid station staff as well as running friend Mark Pancake reminded me of this probably 5+ times throughout the loop.


Between miles 8 and 10, I started to feel a little hot. I considered taking off my long-sleeved shirt then, but figured I'd survive through the loop with it, and began drinking a lot of water, emptying my bottle about a half mile before reaching the aid station. When I got there, I downed two cups of mountain dew while waiting for my bottle to be filled, and then dashed ahead seeing there were two women not terribly far behind me. 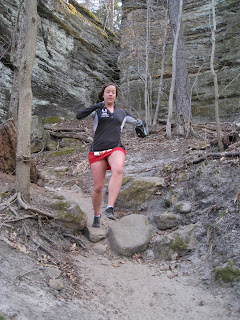 
I gained a bit of ground on them during the stretch to the last aid station where I drank another cup of mountain dew that almost immediately felt like the kiss of death. Within 5 minutes, the 3 cups of mountain dew I'd drank within a half hour on a belly not accustomed to inhaling copious amounts of liquid sugar was wrenching with pain, and I was reduced to trotting. First, Jay Rasch and another gentleman passed me, then a woman (who ended up finishing 3rd), then two more men. In a span of only 2 miles, I went from 4th place, running strong albeit feeling a bit overheated, to 5th and struggling to maintain that (a fast road runner, Liz Wetter, was just steps behind me) and so nauseated I was dizzy and burping up bile mixed with super-sweet liquid. I crossed the 25k mark in 2:46:33 with Liz just a step behind me, staggered to the aid station, tore off my shirt and crumbled in the grass. After a minute or two, I stood up, made my way past my car where I temporarily abandon my shirt, and started back toward the woods. About 90 seconds later, overwhelmed by nausea and the horrific realization I was going to have to run another 15.5 miles in now 65F sunshine with it, I turned around and went back.


Completely defeated, I laid in the grass and covered my face, waiting for the awful feeling to pass. Having already notified the gentleman at the timing table that I was dropping to 25k, I sat waiting for the 25k finishers to finish (the 25k race started an hour after the 50k). It was heartbreaking to see the 50k finishers start coming across the timing mat, knowing I should be almost done. Even worse, my 25k split was included in the final results for the 25k race. I was 15th out of 112, 2nd in my age group, but because I was pacing for 50k instead of 25k, some slower runners finished ahead of me.

After arriving home, I went for a walk with my kids and felt, overall, lousy. I had no appetite for hours, discovered I'd lost over 4 pounds, and my pee looked like iced tea. It definitely wasn't a race to go down in the record books. But, as always, I'm moving on to the next one. Next week I'll be racing a 10 mile road race, and on the 27th-28th I'll be taking my first stab at 100k+ territory for 2013 at O24. 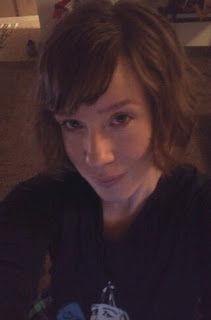 Posted by Kimberly Durst at 4:17 PM