"I'm going to break 4 hours", she wrote, with the kind of confidence one would expect to accompany a statement about the sky being blue or not peeing the bed at night anymore. And, I've heard it uttered so many times that every time another mouth speaks it, it's like deja vu. Strangely, it isn't men that seem so preoccupied with the 3:59:59 marathon; these declarations have been exclusively limited thus far to women. Why? Hell, I don't know. Most of the men I know who are running marathons are either shit happy to finish, or are trying to qualify for Boston-- there's little room in between. But, the women? It's always 4 hours.

For me, it was in 2010: Cleveland. I was coming off a rather overwhelming sense of disappointment from having finished my first half marathon in 1:53 when I decided, on a whim, that 2 months later I would break 4 hours at my first marathon. While I'd trained like a mad woman for that half marathon, often putting in 8-10 fast miles on my treadmill, heading out in the rain and snow for 12, 14, 16 miles, doing hill repeats and tempo runs at Perkins Park, I slacked like it was my chosen profession for that marathon. I'd picked Mill Creek for my first half, not realizing how challenging the course actually was compared to, say, the River Run. There were 19 hills over the course of the 13.1 miles, some of them rather big-- especially for someone whose idea of a hill was something 1/2 as steep and 1/2 as long. I'd expected to finish in 1:45, and had I made my first attempt on a flatter course, I might have at least broken 1:50, but as it were I simply wasn't prepared for the hills or the distance. So, after a few days of never really having experienced the afterglow of a first half marathon finish, I resolved myself to knock out a 3:59 marathon in Cleveland. 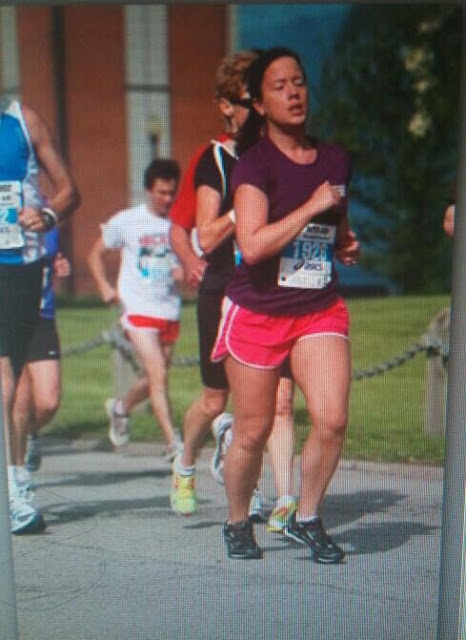 first marathon: Cleveland (2010)-- wearing my prized Pinkies and a pair of $10 shoes, I was poised and ready for the 4:40 marathon disaster that swore me away from trying again for 18 months


It was a disastrous failure of epic proportions. In the two months between my first half and first full marathon, I gained 5 pounds and basically quit training entirely. I averaged about 18 miles per week, hitting a mere 25 once or twice compared with the 40-50 I was running in preparation for the half marathon, and showed up so completely unprepared I didn't know what was about to hit me until it hit me like a dump truck on the 14th mile. I started with the 3:50 pace group, and left them in the dust after 3 miles, concerned they were running too slow and concerned that my legs felt too good. I'd convinced myself that I could bank time early and use it later when I got tired, assuming that the couple minutes I might rack up would take care of all the walking that was about to come. Wrong. Hellfire, was I wrong. After 10 miles, I was tired. I watched the 3:50 pace group pass me like I was standing still, and loafed over the timing mat at the halfway mark in an exhausted 1:56. A quarter mile later, I was walking. I convinced myself that it was just going to be a couple minutes and then I'd run the rest of the way, but after I started running again, I found that I felt even worse than before. After a few minutes of jogging, I started walking again, and in the midst of a lengthy span of walking during the 15th mile, the 4 hour pace group passed me the same way the 3:50 group had. I felt defeated. The walk/run continued until about mile 23 at which point I just started crying, wailing that I wanted to quit and I was never going to finish, and by God I would never run another marathon. By this point, the 4:15 and 4:30 pace teams had long since passed me, and I was afraid I was going to walk my way to a 5 hour finish. Somehow, perhaps by divine intervention, I managed to get my shit together a mile and a half later and ran most of the last 2 miles, but the 4:40 finish that came was not what I'd dreamed, expected, or even accepted as a worst case scenario. Not by a long shot. And, after that marathon, I silently committed myself to never running more than a half marathon again.

That lasted for a year and a half. I finished my second half marathon the following May at Cleveland in 1:52, but still wasn't particularly interested in running another full marathon. I registered for the Towpath half in October a few months later, and "upgraded" to the full, again on a whim, at packet pickup the day before the race. I went into it scared shitless after my awful experience at the previous marathon, and set a more humble albeit realistic goal of 4:10. I remained on pace well into the 20th mile at which point it felt like someone had bludgeoned my right kneecap with a sledgehammer. I hobbled my way through the last 6 miles to a 4:32 finish-- a victory in the sense that it was an 8 minute PR, but frustrated that I'd not only failed at an easier goal, but was now injured to boot. A month later, in November of 2011, I painfully completed my third half marathon, still injured, in 1:58:01 (currently still my worst half marathon finish time) and committed afterward to not only taking down my 4 hour marathon goal, but the Burning River 100. 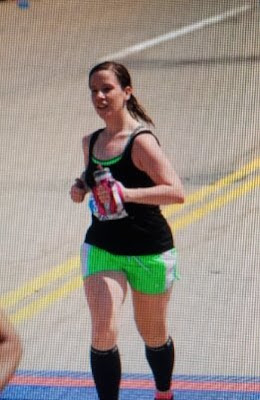 As bad luck would have it, mother nature couldn't have chosen a worse day for my third attempt, and despite a 10 minute PR at Cleveland in 2012 of 4:22, the miserable sun-baking heat and two lovely bouts of diarrhea ensured that this attempt was yet another giant failure. I finished my first 50 mile trail race the following month, and in July of 2012 I finished my first 100 miler. And, it was only after this that I finally took 4 hours by the balls and kicked it into the dirt at the Towpath marathon in October 2012. The week before, I'd finished the Akron half marathon in 1:47:49. I've heard that the best formula to use in determining a realistic marathon goal is to double one's half marathon time and add 20 minutes. It's fairly accurate. So, I ultimately required four attempts. And, even in the fourth, I made it by a mere minute and a half. It isn't an easy feat, ladies. 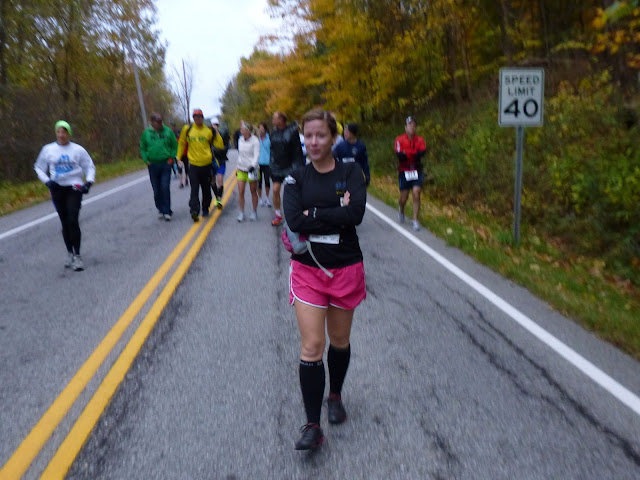 
Now, in retrospect, I'd like to point out that had I been well-trained heading into my first marathon, I probably could have at least come close. But, I don't think I'd have made it. There's something to be said of having covered more than the race distance prior to racing it; and, it takes either a fast runner or one with a psyche of iron to overcome what happens between miles 18 and 24 if one has never, or seldom, run that far in training. They coined it "the wall" for a reason. I think everyone approaches their first marathon confident they can handle it after a few 15-20 mile training runs, and some people do, in fact, run through the latter miles with no ill effects-- physical or mental. I'd dare to say most, in their first marathon attempt, however, do not.

Four hours might seem slow when the Boston standard for those of us under 35 is a blazing fast 3:35, and if you're accustomed, like I am, to running 23 minute 5k's-- a nice 7:30 pace on a typical day, a 9:05 pace really doesn't sound like much to maintain. I can run sub-2 hour half marathons injured, walking a full mile up a long hill in one race last June, poorly trained and out of shape on another occasion. But, despite having raced a dozen ultramarathons including an 85 mile run last month, and a 10 miler in 1:17 a couple weeks before it, I've only run a marathon under 4 hours once. I'm sure there will be more of them in the future as I continue to grow stronger and develop as a runner. But, it's a task not to be taken lightly. 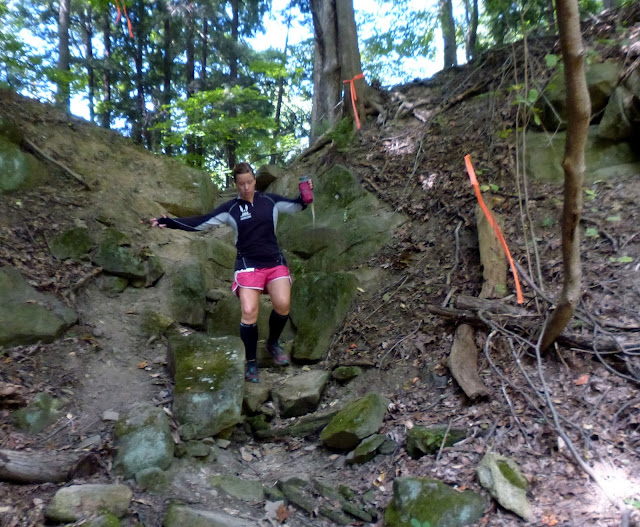 
Me? My next unrealistic goal is to qualify for Boston. It's lightyears away right now, but if there's one thing I'm good at, it's achieving incredibly unrealistic goals. I'm currently injured, coincidentally (or not so coincidentally) the same knee as before, so my next marathon attempt in 6 days is likely to be ugly; and, I have no real goal except to finish somewhere in the vicinity of 4.5 hours. But, I'll start chipping away at my Boston goal when I take on the Akron Marathon in September. I won't make it, but every minute I strip from my 3:58 Towpath finish is one less minute to worry about. In the meanwhile, I have two 100 mile trail races and a healthy slew of 50k's waiting for me-- my real passion as a runner.

To the ladies out there fretting about a 4 hour marathon: it might not happen. And, if you've never run a marathon before, it probably won't happen. But, the good news is that there's always another marathon waiting around the corner. So, continue running with that 3:59 dangling in front of your nose like a carrot. Eventually you'll get tired of chasing it and you'll grab that mickey fickey like it's the only thing separating you from utter starvation. Kinetics. You've just got to keep moving.