Busted on the Buckeye: 50k Style

My GPS is notorious for going on drunken rampages, sending me on wild goose chases toward the Indian Ocean or U-turns in the middle of the turnpike, so when I saw smokestacks and rusted metal as far as the eye could see followed shortly by the announcement, "GPS signal lost" as I was turning onto a road that had a wooden, paint-chipped street sign, I knew I was heading somewhere I didn't really want to go. An hour later, however, it appeared I was back on track, albeit scooting down the road at the speed of a hoverround behind two of the slowest trucks I've ever trailed that were simply labeled "water". The side of the road was peppered with "Jesus Saves" signs every 200 yards, and my radio was picking up 4 stations, one of which was playing this:

Thoughts of the Buckeye Buster 50k that loomed just across the horizon were buried far beneath my immediate concern of actually getting to the race. It took nearly 3 hours, but I finally arrived, found my roommates and fellow ultrarunning friends Dawn Drasner and Kristin Anderson. Still sweating like a beast, my hair sticky and stiff and my face melting, we headed down to the bar for a glass of wine. It took all the strength in my bones not to down it like a college student chugging beer. I still really wasn't thinking about the race.

In fact, I really wasn't even thinking about the race when the race began, which was at 7am for Dawn and I, having opted for the early start. I'd been advised just to run 10 miles, but I ran toward the trail with only a single tracked mindset of finishing 50k. After more than a month of injury and healing, and only 2 weeks until Mohican, and after disastrous, shortened races at both Fools and Cleveland, I resolved to get this one done no matter how long it took, short of an even worse injury. I'd reckoned that if I couldn't even run 50k, I had no business making the trip to Loudonville and I'd already reserved the campsite and paid the entry fee. The penny-pincher in me couldn't deal with another loss after having pulled from my 50 miler a couple weeks ago. I expected an ugly race. And, I wasn't let down. 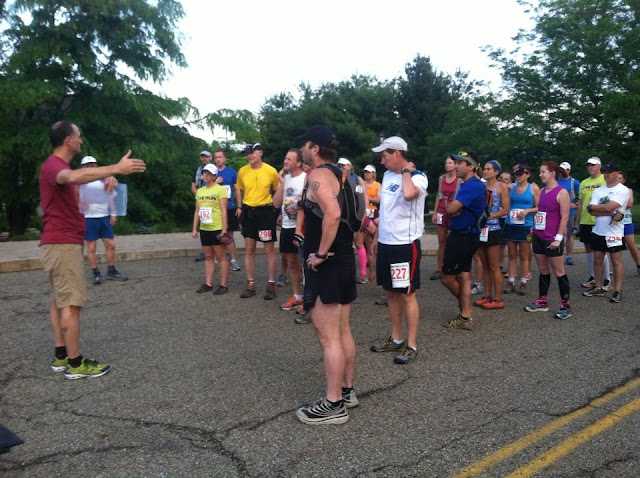 The trail was alive. It was alive with the humidity of a tropical rain forest-- if, of course, tropical rain forests were loaded with horse poop, crazy-eyed deer, and horseback rangers wearing bright yellow shirts. it was alive with rustling noises in the leaves. It was alive with deer flies. It was alive with my profanity. After about 3 miles I came to two conclusions: 1. I was no longer injured; and 2. I was going to run out of water long before I reached the aid station. Actually, I was probably more concerned with ditching the poor guy who was running behind me after a brief conversation indicated he was considerably faster than me but was refusing to pass. It was like putting a Corvette behind a Studebaker, and after a couple miles of this I was going crazy. Under the false pretense of tying my shoe, I beckoned for Corvette to pass me, which he did with the speed I fully expected; and the next time I saw him, he was easily a full mile ahead of me, coming back out for his second loop as I was approaching T-one half mile to finish my first, at which point he'd warned me a barrage of 10 milers were about to come through. When he dashed by, I was reduced to walking up the 48593457th long hill of the loop, and it was hot. I finished the loop in 1:59:11, 10 minutes slower than I'd done in December. I furiously chugged water, lamented melodramatically about my exhausted, heat-stroked misery, and then proceeded to start the second of the three 10.4 mile loops.

I think the already warm 73 degree humid start temperature had easily risen 10 degrees, and, running toward the first of many hills, I started to feel really bad. The deer flies had choreographed their assault plan perfectly, and began to flank me from all directions. The creaking trees were giving me the willies. And, while I felt good enough to continue running on the flatter stretches and some of the tamer inclines, my walks uphill were like a dance with Methuselah. I was panting, sweating, grabbing trees like z-poles, and chugging my water bottle, hunched over so far it's a wonder I didn't just take the plunge and start crawling. Always a math enthusiast, making calculations and estimates while I'm plowing along the course, I was dismayed to reach the aid station on the road in 1:18. This told me I was now averaging 13 minutes per mile, and if I didn't get my shit together fast, I was going to be giving my early start a run for its money. 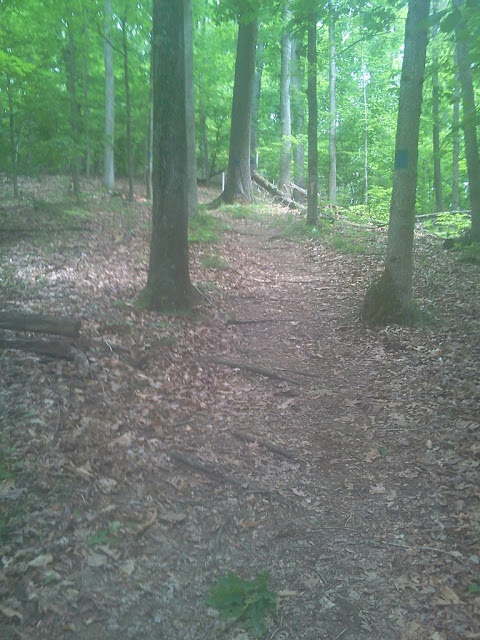 Now, people are known to think and do crazy things in longer ultras, but I'd admittedly started naming landmarks by the middle of the second loop, and had started singing "Good News Chariot's a-Comin'" out loud between my red-faced, hunched over, panting episodes. Just past the long stretch of road post-aid station, and into the woods, there was a long climb up a very muddy hill that was utterly swarming with deer flies. And unfortunately, no matter how loud I sang "Good News Chariot's a-Comin'" as I slid and swatted with a vengeance, they just kept coming until I swatted so hard I slid three feet across the mud and shouted as loud my pipes would enable an F-bomb that probably landed in lake two miles behind me. At the top of the hill, a horseback ranger was discussing a black bear sighting with a non-horseback ranger propped against his car, and partly embarrassed by having cursed so loudly so close to these two men and with a feeling of exhausted defeat, I put on the air of running past them for about 15 seconds. And then, before me were the Four Sisters-- a series of big grassy hills. I didn't even try to run. Not up. Not down. Not at all.

It wasn't until the trail led back into the woods and the trees offered shade from the baking sun that I started to run again. I was about a mile and a half from the end of the loop before I realized I'd been running alone since I lost Corvette, and I think it was the most pleasurable feeling and moment of the entire race, second only to finishing. I didn't want people anywhere near me, and having been alone for 18 miles was a mental oasis in the midst of this misery. I covered the second loop in a painfully slow 2:19:58, lamented further about my agony, and prepared to loaf through a 3 hour third loop. 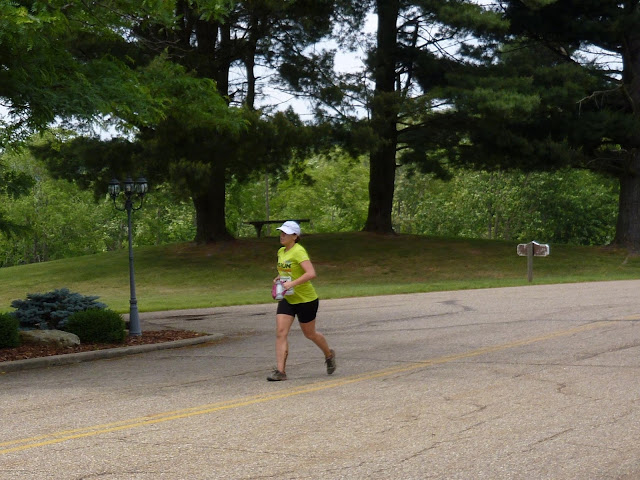 Prepared and executed are not synonymous, however, and once on the trail, I could not bring myself to walk when I was clearly still capable of running. So, while I was trotting when I did run, and walking slower than ever when the spirit led me, I was moving faster than I expected, and realized after heading up a long hill I named 'Hugo' that I still had an outside shot at breaking 7 hours, unlikely as it was. Reaching the aid station in 1:36 was a hard-hit smack back to reality, however, because it meant I had slowed down to 16 minute miles on this 6 mile section-- more walking than running, even on hard trails. But, it also meant I had not been reduced to a full-blown death march, and the last 3.4 miles were easier after the Four Sisters than the whole course up to that point. I knew I'd be able to work in a lot more running once I'd passed the Sisters, but, I discovered as I was trekking up the second of the four, first I'd have to conquer them and it was proving a Herculean task. At the top of the hill, I sat down in the shade-- yes, sat down, smack in the middle of the course only 3 and a half miles from the finish, and heaved an exhausted sigh. My heart was beating furiously and I felt heat sick and tired, and frankly, I'd just quit caring about 7 hours at that point. I scrambled to my feet a minute later when I saw the feet of a runner approaching under the tree branches, and continued walking up the third and finally the fourth grassy hill where again, I sat down. This time I made a silent count to 30, took a long gulp from my water bottle and, after walking the last sun-baked stretch to the woods, started to run. I continued to run most of the remaining 3 miles, only walking the uphills. Coming out of the trail, a quick look at the time on my phone indicated I was just approaching 7 hours with a little less than a quarter mile remaining. I didn't realize that we'd started 2 minutes late, so when I crossed the finish line in 7:02 and some change, I didn't think twice. I laid down on the pavement in fetal position, exhausted and overjoyed to be done. 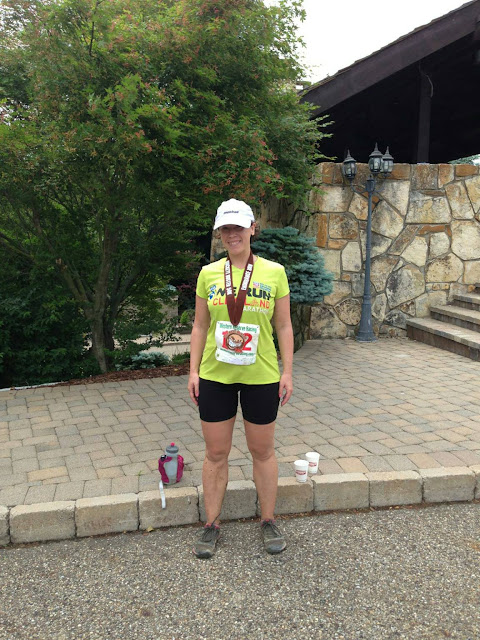 Kristin was at the finish line along with Michelle Skoletsky and George Themelis, and after posing for a picture, yakking about the hideousness of 90 degree heat and hills, and then ripping off my shoes and socks, I made the discovery that my finish time was actually 7:00:38-- I'd missed 7 hours by a sit on the top of a hill. Waiting for Dawn and other friends to finish, my mind was digesting the experience. I'd finished 40 minutes slower than I'd run the same course in December, and nearly a half hour slower than my slowest 50k trail race, but despite this, I felt optimistic again-- and I needed that. After a month of hell battling injury and recovery, a disastrous 2:00:24 finish in the half marathon at Cleveland during my painful, botched marathon attempt, a DNS at my 50 miler, and being unable to run more than 5 miles for weeks, I'd finally found a light to follow. Twenty-four hours later, aside from the expected soreness of running a hard race, I believe I am still injury-free. I gambled, and it looks like the cards turned in my favor. However, only time will tell. Mohican is just 2 weeks away where I am registered for 100 miles, and there's an excellent chance I'll drop to the 50. But, I may not. I've done crazier things, gambled with higher stakes, and prevailed. People have told me the sky is the limit... but the sky is limitless. I like that. Almost as much as I like running.