Putting One Foot in Front of the Other

"Just put one foot in front of the other", they said. "And, you'll do it", they said. "Well, I put one foot in front of the other", I said. "And, I walked into a tree", I said. And, I fell on my ass in the mud. And, my eyes looked like the Cookie Monster's eyes, bouncing around my surroundings as I executed a perfect albeit non-intentional rendition of Quasimoto's hunched stagger up the hills. Wheezing at the drizzle and humidity of the midnight June air, when I collapsed into a piece of lawn or camping furniture that felt as though it were wobbling precariously at the edge of a cliff, I closed my eyes at mile 66. When I opened them again, the bottom of my bib had been ripped free and I was free to leave. It was over. And, just like that, I had my first official DNF.

I'd like to say the day started out with euphoria and dripping optimism, but it didn't. As much as I wanted to believe I would doubtlessly finish the Mohican Trail 100, I knew my house of cards had to be stacked perfectly, or I was going to end up part of the race's brutal 50% drop statistic. The obstacles had mounted high as a kite in a windstorm: nearly a full month of no real training in May due to an injury that had still not completely healed, only one extra pair of socks in my start/finish drop bag, less than 2 hours of sleep. The injury alone was enough to burn the fear of fire into my psyche. I admittedly lacked the confidence I had at Burning River the year before. 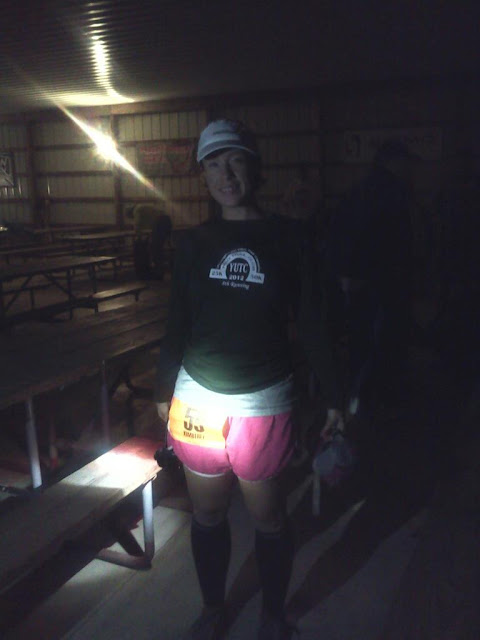 I ran the first five miles very slow, maintaining ~13 minute pace, stopping for a bathroom break at the aid station where I ditched my long sleeved shirt and headlamp. While it had rained considerably earlier in the week, the trail was remarkably dry during this section, and, when not climbing into the sky, very runnable. Though losing the headlamp and hot long sleeves and using the bathroom left me feeling lighter and less burdened, I had already noticed a familiar pain creeping out from my left ankle. If the world were able to watch my thought process projected onto a screen, I think to any sound-minded viewer, it probably would have been akin to watching the battle between a drunken archer and a deer. Perhaps that poor deer might survive a few hours avoiding misguided arrows, but eventually his luck is going to run out.

The next section was beautiful, but nothing of any real significance happened. On my way to the third aid station which was somewhere between mile 13 and Mars, I decided to snap a few pictures and even record a bit of the course in attempt to slow down a pace I noticed had started to accelerate during the previous segment. These are mostly single-track, technical trails, and very hilly, so moving from a 13 minute pace on the first segment to 11 minutes on the next was a significant change, and I knew I wasn't going to need any more hurdles five hours down the road.

The Mohican 100 course is comprised of 4 loops: two "marathon" loops of ~27-28 miles, and two shorter loops that are approximately 23.5 miles (yes, I know the course description indicates 27 and 23 miles, respectively, for the two loops, but these are not accurate measurements). The back half of the long loop is, in my opinion, easier than the front half with softer trails, less mud and gravel, etc. I was careful not to overrun this stretch, but had really started to feel shitty during the last two miles when the trail opened onto the sun-baking dusty dirt road and pavement. I'd been concerned I was moving perhaps too slow for miles, so I was relieved to learn I'd finished the first of the two long loops in 6:02.

Sitting sprawled out in the grass, spread eagle, I shoved a pile of potato chips into my mouth and smeared a fistful of Vaseline over my fiery inner thighs. It was early, but I felt bad. Peeling myself from this position to start the second loop was like a walk down the green mile toward the electric chair. My ankle hurt, and I felt loopy and sleep-deprived even though it was an hour shy of noon. A temporary remission around the 50k mark lifted my spirit temporarily and I began reassuring myself out loud that I was going to finish the race. It passed as quickly as it came, though, and by the time I reached the aid station around 36 miles, I felt even more wasted than before. It was taking more strength than I could muster to focus on pushing the ankle pain under the proverbial carpet, and the effort was exhausting-- mentally taxing for a brain that was already working overtime. I felt, for the first time that day, a true sense of defeat. I'd not felt this bad until 60+ miles at both Burning River and O24. 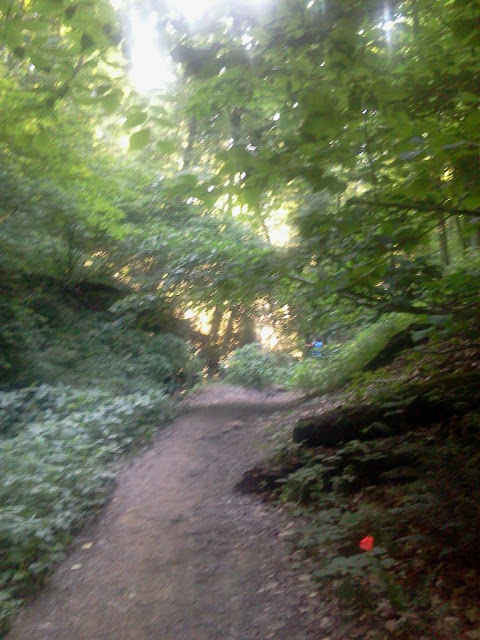 A slow slog commenced from here as the landscape shifted from trees and more trees to ledges, rushing water, roots, and mud. Even though there were literally hundreds of runners on the course at this point, I felt really alone. In shorter trail races, I do not want company, but I desired it badly during the stretch leading up and away from mile 40. Mental fatigue from the lack of sleep had set in full force by the time I reached the final aid station, and I realized I'd lost my desire to finish the race. I kept seeing weird things along the trail, like a person sitting on log that, when I got closer, wasn't a person at all, or trees that moved from spot to spot like they'd been cut and pasted on a computer screen. I am fearful of these things, but expected them after 24 hours-- not twelve. Once I saw a second person sitting on a fallen tree that turned out to be another phantom figment, teemed with the ever-growing pain in my left Achilles tendon, I gave up and started a long walk to what I'd decided was going to be my finish at 54 miles. I passed the 50 mile mark in about 12:43 despite all the walking, and allowed a seemingly endless train of runners to pass me during the next four miles. I walked even the long, paved straightaway leading to the aid station where, in my head, I'd already committed to dropping.

At the aid station, both of my pacers- Andrew and Christen were already waiting for me and with the kind of enthusiasm that wasn't going to be crushed by a villainous frown, a limp, and a pair of legs that were clearly rubbed raw on the insides. I was ushered into the podiatry tent where students spent more time debating what course of action to take on my brainy-looking feet than I imagine John Nash spent working on his Nobel Prize winning piece on game theory. Still sitting in the tent and condemned to more mileage, I pulled my tutu over my head and, with my last breath of confidence, announced I wasn't giving up yet. I still had hours on the cutoff, and declared I could walk my way to a 32 hour finish-- not exactly the stuff of dreams, but a finish nonetheless.

My own enthusiasm survived exactly one hill into the third loop. Christen and I had covered approximately a mile when we began our trek up, up, and up where, smack in the middle, I felt like I was going to lose my shit and go down. I had stopped to pee on the side of the trail, and upon standing, it felt as though my blood pressure had dropped to zero, and I lost my breath in a scary spell of faintness. I literally laid down on the trail, and rapidly fell into a panic that I would not shake for the next 4.5 hours. Despite the obvious setback, we made it to the 58.5 mile aid station in good time. But, I felt tired and mentally unwell-- scared that I was unable to catch my breath and that I was getting dizzy, and losing my ability to focus on the ground in front of me. I didn't want to eat, and I didn't want to talk to anybody. I didn't want to run or walk anymore.

We set back out toward the trail after a few minutes, though, and my mental state deteriorated like I'd been consumed by a cancer. I kept trying to focus my eyes on the trail, but they were falling all over the map, and with every new hill came more dizziness and fear, and an overwhelming feeling that I was unwell and needed to stop. Several times I stopped and tried to lay down in the grass and leaves and even mulch on the side of the trail. It was a long 4 mile stretch to the aid station at the 100k mark that, in retrospect, reminds me a lot of the stretch leading up to the O'Neill Woods aid station at Burning River-- except that there was no light at the end of the tunnel waiting for me with pancakes and Dr.Pepper and desperate do-it-or-die-trying hope at this aid station. There was a lawn chair and potato soup; and, there was the sad realization that the dream was over.

I knew this next segment would be my last, and I suspect Christen did, too. Up to this point, she'd tried like a diligent student to engage me in conversation; but, the words became fewer, further between, and less involved as we moved through the woods and rain drops during these seemingly endless miles. I jammed my toes, huffed and puffed, walked into a tree, and fell on my butt into the mud before finally the sound of the generator at the aid station registered in my brain. I did not attempt to run my way into the grace of surrender. I simply sat in a chair and closed my eyes. And, when I opened them, my race was over. It was midnight and my teeth were chattering uncontrollably, and I felt numb inside like I'd given up a piece of my heart. I felt, for hours afterward, like I never wanted to run again. The feeling eventually passed, of course, but the intensity of it and the heartache set me into a deep funk that still has not entirely passed. This was a profound experience, Mohican.

In a way, I think maybe I needed this experience-- all of the negative experiences I've had since O24 because they've sent me looking at what I'm doing from new angles. It is good to be humble. It is good to occasionally have that house of cards spill in all directions around you because it provides an opportunity to construct a new one utilizing that which was learned from the previous experience. If there is one thing I've found to be true about this sport, it's that bee stings, sprained ankles, pissed pants, muddy asses, projectile vomit, fits of Cookie Monster googly eyes, lost appetite and toenails, blood, pain, and the dreaded DNF can strike anyone. And, it does. But, we keep coming back. Trail running is a passion. A love. And, it doesn't die with a DNF.