Misery and Magic in the Mud with the Buckeye Trail 50k

It had been 10 hours since the start of the 50k, and I was at home, sipping my traditional post-ultra diet pepsi when I realized I had to pee for the first time since a half hour before the race. My urine looked like Guiness had been poured into the toilet bowl. Suddenly, all those stops during the last 15 miles to sit for a minute, smack in the middle of the trail, made sense. I was done, had waited until the 9 hours ticked away on the clock before I left the scene, and had made the hour drive home-- including the stop for the Pepsi, and evidently I was dehydrated. It was the ugly cherry on top of this ugly sundae.

Let me start by saying this was one of the worst experiences I've ever had in any race. Mile 65 of Mohican, and Hallucination Woods at Burning River last year do not have much on the 2013 edition of the Buckeye Trail 50k. Any time I sit down in the mud and slide into a creek should probably raise a red flag that it's show time for the ugly to come out, because sliding down a muddy embankment into the water is what turtles do, and post-apocalyptic people trying to evade radioactive predators-- not runners racing a well-marked course.

The day started at 4:55 am. That is when I woke up, splashed and dashed via shower, got dressed in black pants that I hoped would mask the pounds I've gained during my running down time, and hit the road. After picking up my bib, I downed a breakfast of water chugged straight from a gallon jug in a vain attempt to ward off the Guiness pee and mid-race dizzy stops that led Kurt Osadchuk to genuinely worry about my well being; and, I popped a handful of Tums to ward off the Diarrhea Fairy who is notorious for delivering unexpected gifts without much warning mid-race. No food. I bathed my feet in Vaseline, laced up my favorite shoes, and I was ready to go. 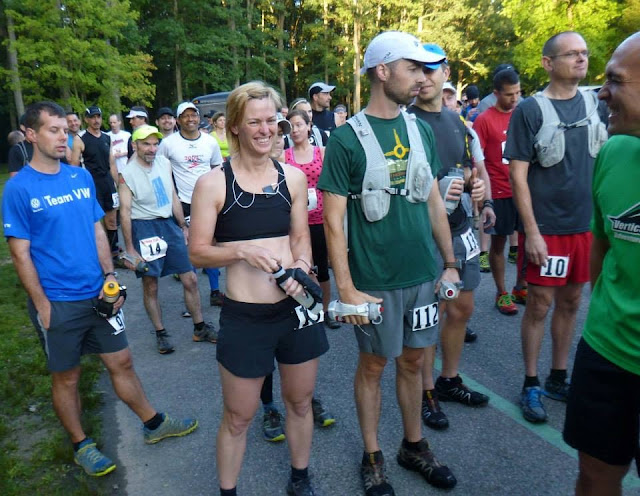 We took off at 7:00, and I felt amazingly fresh. I think, had this race ended at the Snowville aid station, I'd have been in terrific shape. But, there were 25 more miles to be run after that. And, shortly thereafter, people began passing me in droves. And, I began to feel the effects of my months out of regular training. Now, I expected mud. I expected a lot of it, in fact. However, in all of those muddy fantasies of epic finishes, sloshing through water and muck, I just got dirty more or less. The struggle between swamp and shoe was not present, and the hills that followed said struggle were existent much the same way a boring painting on the wall is existent-- a vague awareness that fades into virtual nothingness. I didn't expect to feel so trashed so soon.

After a while, I lost track of how many women were in front of me, and quit caring. I was walking, as fast as my legs could carry me, up a long gravel hill that was being broiled with me on it under a hot sun, next to the damn turnpike.  All I could think was, "whose sick f&*^ing idea was this?" A strategically placed climb on the side of the road where countless people driving by in the comfort of air conditioning and shade could laugh at the morons wearing packs and knee-length socks plowing up, up, and away? I wanted it to end. I wanted to concede from Burning River and ultra running in general, and resign myself to charity 5k's and fat ass half marathons for at least three straight hours between Boston Store on the way out and Snowville on the way back.

When I got to Pine Lane, which took over 3 hours-- much longer than I'd anticipated, I was muddy, tired, dehydrated, and utterly without an appetite. I forced down a bit of pb&j because I knew it couldn't be good for me to be running on literally no energy (having eaten a breakfast of water and Tums), and grabbed a gel to take with me in the case of a catastrophic emergency during which I somehow rationalized that a thick syrup of sugar would guide me back into reality. I realized I'd lost Nick Billock, who had been pacing close to me for miles, and began the long trek back to the start/finish.

I missed a turn somehow around Boston Store, and ended up lost, eventually making my way back to the aid station where I announced my misfortune in a burst of frantic tears and sweat. "You only added maybe a mile", someone said in a reassuring voice, the last thing I wanted to hear. "It could be worse-- one year Star Blackford added like 5 miles to Burning River". I thought I was going to vomit. "Go back the way you came and just follow the arrows to the trail". An extra mile. Ugly whipped cream to add to my ugly sundae with the ugly cherry. I began to think if it got any worse I was going to just take off my shoes and start walking back barefoot along the road with my thumb in the air, if I could find my way to the road, anyway. It kind of felt like I couldn't find my way out of a paper bag.

And then, whoosh-- I was on my butt. "Hrrrrrghhhh!" I bellowed, "come ON!" I was now standing, ankle deep, in a creek, my rear end covered in mud, and ahead of me was a long climb up a hill. After a double chug of water and a deep breath, I began my ascent. It took about ninety seconds before I realized my heart was racing at an unhealthy rate, and I felt dizzy much like I had working my way up hills later in the 100k I survived at Mohican the month before. I literally stopped dead in my tracks and sat down, thinking, "you've got to be kidding me". At the top, another gulp from the water bottle propelled me back into running action, and I decided that hell or high water, I needed to salvage this bad experience however I could, and started to race. Without GPS, it was difficult to discern how many miles had passed since the last aid station, but I estimate I had about 8 miles remaining to the finish. It was time to start chipping away at the dozen people who had passed me since Pine Lane. I started with a nice lady wearing a green shirt who had passed me heading up a previous hill, also upon which I'd stopped, where she had offered me a salt tab and gel that I politely declined. I then set my focus on a man wearing a grey shirt who was walking on a relatively flat, albeit muddy, stretch; and, he graciously stepped aside to let me pass. Agonizing over the minutes and miles that separated me from Snowville, I plowed onward and upward, and sloshed through mud. And, upon reaching the last aid station where I downed a cup of ginger ale and allowed crew to douse me with cold water, I left determined to end this misery as quickly as I could.

The last 6 miles were where the only magic of the whole race happened for me. I set out on a fruitless chase of a man and a woman who were clearly running together-- the man apparently pacing the woman, but they always seemed to be just a little too far ahead to catch. A group of 4 people-- three women and a man, were, however, close enough that I began to chase them not long after reaching the final unmanned water stop approximately two miles from the finish. For perhaps a half mile, it seemed as though they'd gotten, like the man and woman combo, too far in front of me, but then, with about a mile remaining, they came back into sight, and I caught up and began following them closely as though they were pacers. Always a sprint-to-the-finish runner, as that mile turned into a quarter mile, and then finally a stretch along the pavement to the finish line, I dashed past all four of them plus another woman who was about 25 yards ahead. 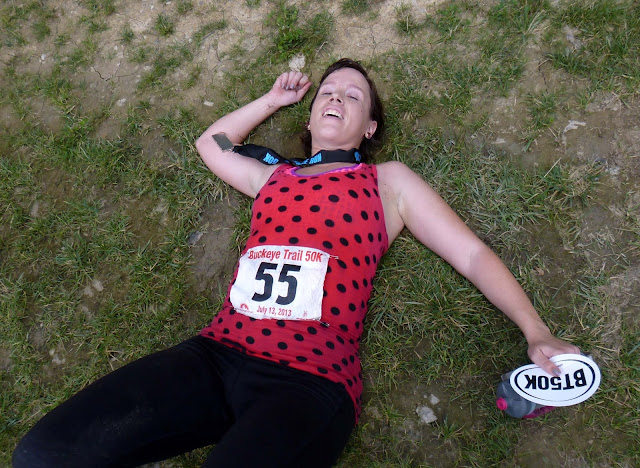 Finishing in 7:08, by far my slowest 50k trail race, I immediately declared, collapsed in a tired heap in the grass, that I was done-- no Burning River, no way. This was it-- the buck stopped here. No passing Go. I was pulling out of the rodeo. But, 5 minutes later, after realizing all my vital signs were good, that I could walk with ease-- even run, and that I had no blisters whatsoever, I realized it was just a shitty experience, but one I'd once again survived and had added to the racing memory bank. I learned that I could, even after sliding down hills on my butt, tripping and flying into a tree, and suffering the consequences in my quads of having not run more than 10 miles at any given time during the past month, still dig deep and race a strong finish. I'd done it at O24. I'd done it during the last 5 miles of Burning River in 2012. And, these are the kind of experiences I need. They're the kind in which one learns that even when the shit hits the fan, there is a light at the end of the tunnel if one is willing to run, walk, or crawl one's way to it. I love this sport for many reasons. Sitting in the grass with my shoes off, drinking water with ice cubes, thinking about how good it feels to be done is one of them. Burning River is less than two weeks away. Cheers to that, I say. I hope you are at the finish waiting for me. I'll try not to keep you waiting for 29 hours and 42 minutes this year. 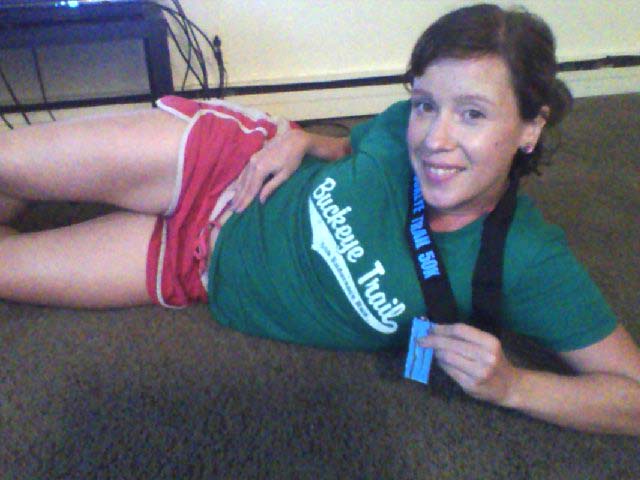