I've said it before, and I'll say it again: one of the most deliciously tempting endeavors for me, as a runner, is to attempt things that are rather unrealistic...at least given my training habits and rather robust exterior. Challenges are like my badges of honor, being able to take that deep breath, clear my throat, and then say, for all and sundry to hear, "yeah, so I'm going to run a 3:30 marathon, guys". Ok, well, I haven't yet slid off that slippery slope, but I did make it clear that I planned to run in the vicinity of 1:45 at the Rite Aid Cleveland Half Marathon this year. And, considering my previous PR was 1:47:49 (Akron 2012), and that I'm a solid 5 pounds heavier and generally on the cusp of sleep walking thanks to 5 midnight shifts a week at work, I think I'd taken the cake with this one. Granted, I'd used the first 4 months of 2014 to build a strong case for the feasibility of this goal (100k PR, fastest 50 mile split, solid 75k in March, back-to-back sub-23 minute 5k's), but I knew I'd met my match. I had to maintain an 8:01 pace for 13.1 miles. Last November, out of shape and depressed, I couldn't even do that for 5 miles at the annual Thanksgiving event.

On Monday, I crunched down and knocked out 4.25 miles at a 7:44 pace, and then couldn't seem to stop running the rest of the week. Tapering doesn't really happen for me in the conventional sense anyway, much less for such a short race, and despite really wanting to tear up this half marathon, most of my planned 5-6 mile mid-week runs ended up being much longer. On Tuesday I even ran a double: 8 morning miles followed by 4 more at night. None of these miles were particularly slow, either. I decided that I might as well take advantage of feeling good, ran to my heart's content, and then headed into the weekend still feeling like a million bucks.

I wasn't particularly fond of the corral system at this year's race, and chose to ignore mine, lining up instead with the 3:30 marathon pace team. In hindsight, I think it was the right move, and I got the perfect start: slow enough to be considered a warm-up for the first half mile or so, and then a half mile build-up to race pace. Mind you, I do not wear a watch, much less one that indicates pace, distance, and more techy stuff like elevation change. But, I'm an excellent gage of pace and distance naturally, and managed to maintain the 20 yard lead I had on the pace team through the half and full split at the 9.5 mile mark. 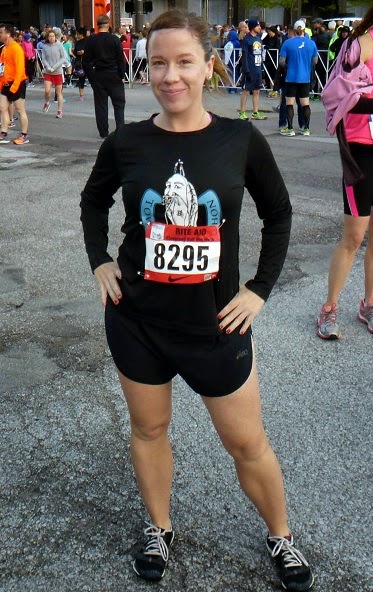 It was an ideal day for fast running, and I took advantage of the cool temperature, wearing a breathable long-sleeve tech shirt, light Asics retro-style black marathon shorts that I bought on ebay for $2, and my favorite NB Minimus  trail shoes that I think are actually a perfect option for road racing, sans socks or any of my usual costumery (wings, ribbons, bells, whistles, tiaras, tulle). I was dressed in black from head to toe like a badass in mourning for her old, dead PR, and ran with the sunrise on my shoulders and cool of the morning fueling me with good feelings. I didn't eat breakfast, carry water, or partake in the gatorade or gels being passed. It was just me and the road, and I loved the new course from the first mile. 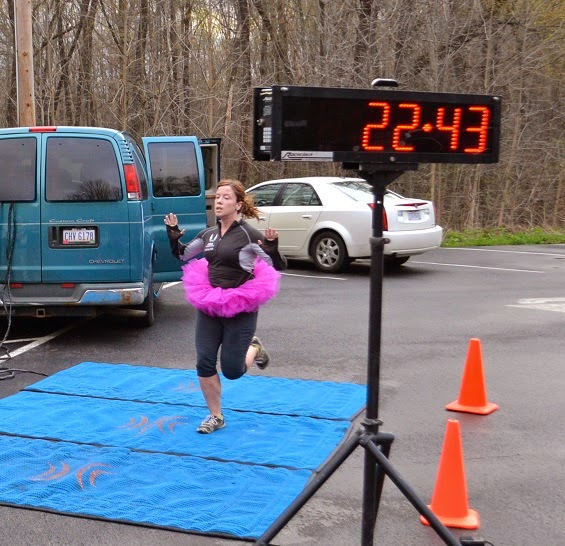 Glitter, tutus, and muddy shoes: how I typically look nowadays when I race

Without any type of timing system during the race (which I thought was customary in these larger events; the lack thereof is my one and only complaint), even with a near-immaculate ability to gage pace, I was still utterly in the dark during the entire race. Based on my 20 yard lead on the 3:30 pace group, I assumed I was running in the high-7 minute range, which is also what my body was feeding my brain. I flew through Tremont, enjoying the residential views and crowds, and headed into the second half of the race feeling more confident than ever. I was going to nail it, it seemed, and in a big kind of way. At the 9.5 mile branching of the half and full marathon races, a quick glance over my shoulder indicated I hadn't lost any of my ground on the pace team, and I sailed up the first hill without a strain or complaint.

Then, the second hill happened: a long, grueling stretch that slowed me to a pained, strained, jog. I knew I was ahead of the game heading into this one, but by the end was convinced I was rapidly falling behind. I worked the flats and downhills as best as I could to try to gain back the lost ground, but I'd become concerned for the first time that I might have fallen behind pace. I'd easily lost 20-30 seconds on the 11th mile. The next mile was no different. My one and only attempt at asking a garmin-wearing fellow half marathoner for our pace was a taste of the vaugiest vaugeness imaginable: "oh, a little over 8 I think", (glances at garmin), "yeah, over 8". Plowing up the final hill around 12 miles, I left him behind, walking as he adjusted his fuelbelt.

Running back into the packed part of the city was incredible: the view, the sounds, the sun on the shops and buildings. I'd lost a minute, probably, I realized, but assumed I'd built enough of a lead on my 1:45 goal that it hadn't hurt me too badly. Flying down the final stretch, I could see the clock ticking through the 1:46's, and actually smiled-- first time ever, as I raced across the finish line. It was a PR, no matter how the dice were rolled. Unfortunately, it wasn't as much of a PR as I thought it was. I'd only started 28 seconds after the horn sounded, so my 1:46:47 clock time only adjusted to 1:46:19. It was still my best time by a full minute and a half, but left me rather perplexed. Was the course a tenth of a mile too long? How could I have been this far off? 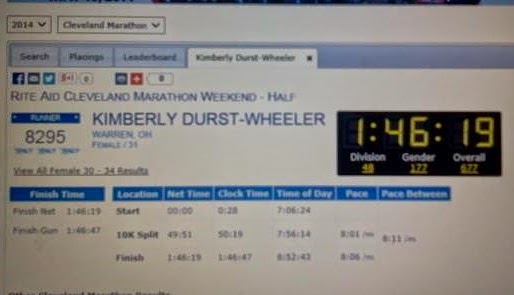 Nonetheless, the racing season is off to a great start, it seems, and I'm really looking forward to the big ones waiting in the wings. I'm planning to bang out a fast trail 15k this weekend in Wooster, and then prepare for my first really big trail challenge of the summer when I travel to Lore for the Buckeye Buster 52 miler followed by the Mohican 50 mile in Loudonville two weeks later. With a sub-6 goal at the Buckeye Trail 50k in July and the Burning River 100 in early August, I've probably bitten off more than I can chew again. But, that's the way the ball rolls when it comes to my attitude toward running and racing: dig in with gusto, and dream big. Despite missing my goal, I'm still chalking up Cleveland as a big success this year, and I'm blinded by optimism as I prepare for the rest of the summer. 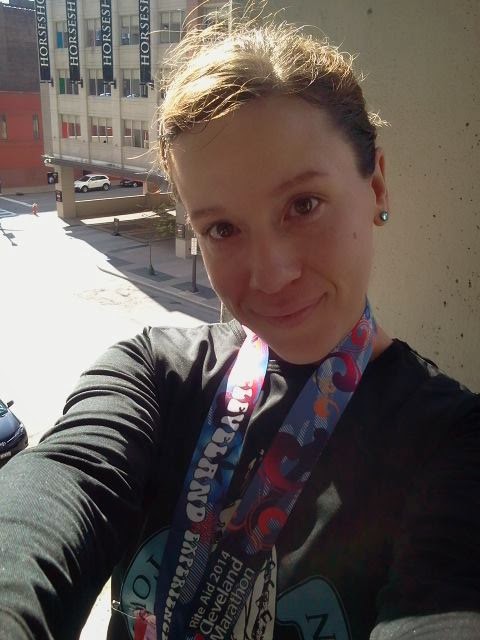 Posted by Kimberly Durst at 3:29 PM