People tell me not to be disappointed, it seems, when I'm disappointed most...and worse, tend to present this warning as though they're going to be disappointed themselves if I'm disappointed in myself. Make sense? Maybe. But anyway, it's a part of human nature; and, as a runner, I've had my share of good and bad races. I've also had my share of proud "bad" races and disappointing "good" races. It's all a matter of perspective. Not long ago, someone mentioned that there is no such thing as a "regretted" run; one always feels better after having run. There is truth to that statement, I think, but I don't necessarily think it's always true. After having run a 100k PR this past weekend at the Outrun 24 hour trail race, I found myself in this strange sort of limbo where I'm not sure whether I am satisfied or depressed with the outcome. There is satisfaction with the new PR, but there's a sense of regret.

I began training for my first ultra in December 2011 when I committed to running-- and finishing-- the 2012 Burning River 100 having raced just a couple marathons after more than a decade of high school, college, and recreational road racing distances under 6 miles. I finished my first 50k in March 2012 in 5:43 followed by 10 hours (46 miles) at O24 the following month. Since then, I've been a loose cannon, signing up at the drop of a hat for anything and everything of any and every distance that falls within a 2-hour driving radius it seems, if I can fit it in my race schedule. In the process, I saw some pretty amazing things happen: my first 100 mile finish, a sub-10 hour 50 miler, 1:17:04 in the 2013 CWRRC Spring Classic 10 mile, a marathon under the 4 hour mark. Last year I managed to log 85 miles at O24 despite some lengthy breaks and an early stop, so not surprisingly I expected to easily top that mileage this year. 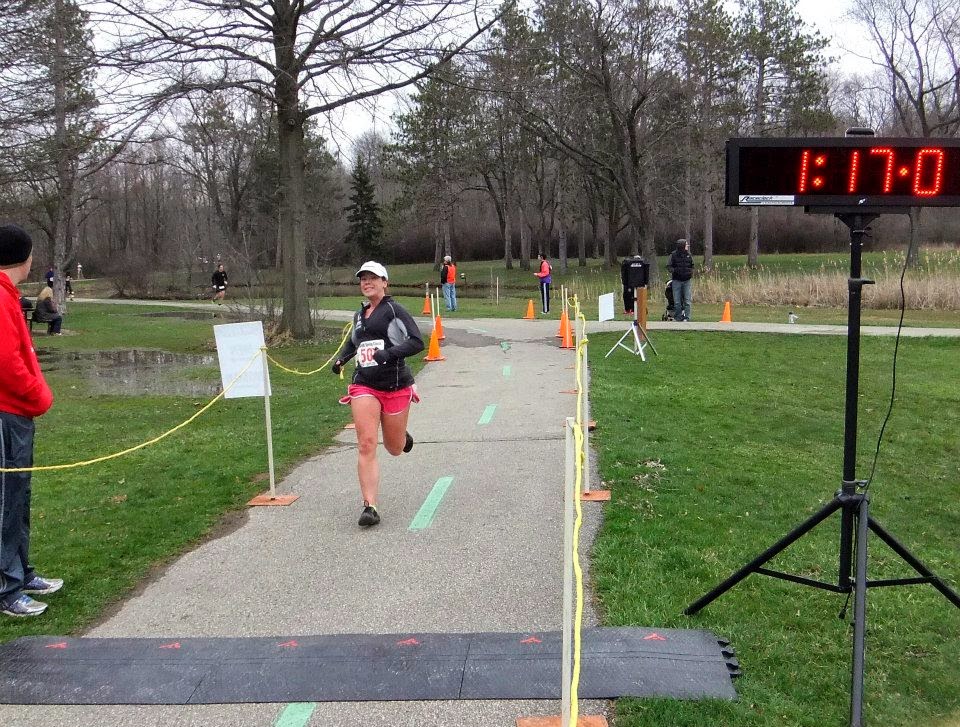 My training is, I would imagine, laughable to most ultra runners. Working midnights and being a single mom, I can't afford to spend the kind of time one would expect of someone training for a 100 mile race. Most weeks I'm lucky to log 40 miles. I peaked (excluding the week I raced 75k) at just 51, and some weeks I even fell below 30 miles. I'd typically hit 15-18 on the weekend, and then a scatter of 5-7 mile faster runs during the week. My faster finish times have come as a result of muscle memory and sheer will power, I'm convinced, because my training is and has been abhorrent for quite some time.

I went into O24 this year with a cohesive plan, plenty of muscle memory and plenty of memories, in general, of all the things that had gone right and badly wrong over the past two years. It is impossible to unsee what has been seen, and that includes my feet after finishing Burning River in 2012. I also vowed to avoid Mountain Dew and any and all candy. Remembering fondly how great I felt at the Buzzard 100k thriving on baby food and grilled cheese, I thought I had it all figured out. Wearing my favorite red Inov-8 Xtalon trail shoes and after a full night's sleep in my car, I felt reasonably confident. 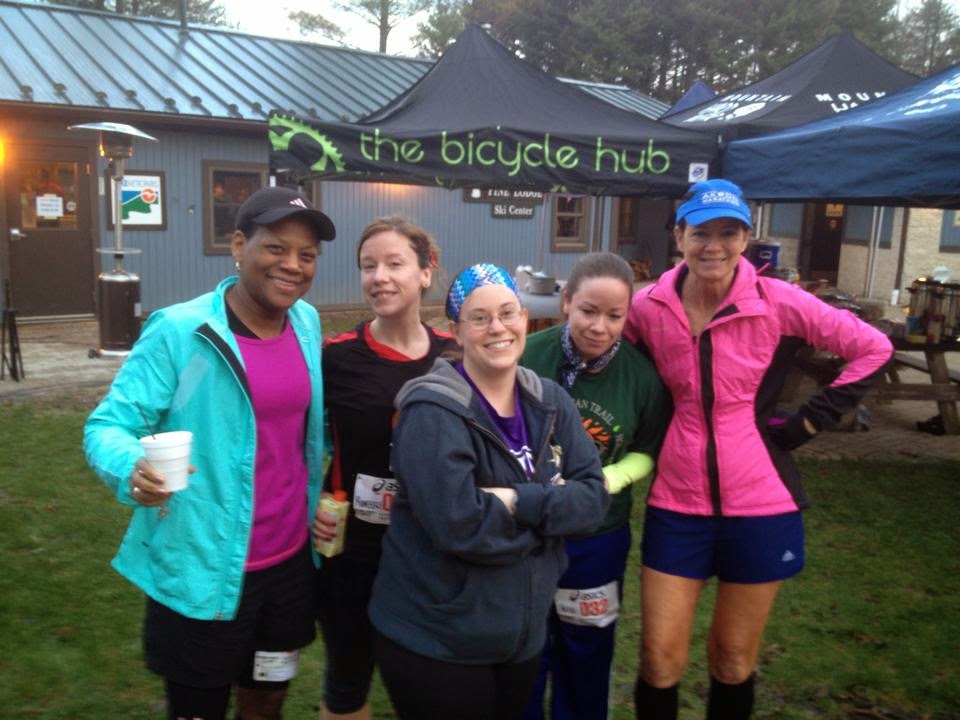 I walked the hill from the first loop onward, but still came across the timing mat well under 10 minutes, and continued this trend for about 10 miles until I forced myself to slow down by walking the paved stretch leading to the trail. Considering my training mileage was lower than it had been the past two years leading up to this event, I'm still rather surprised to have been moving as fast as I was moving. By the time I reached the 50k mark in 5:47, two things were apparent: I was pacing better than in previous years, and I had already lost my appetite. The latter was a hard blow to take.

My immediate reaction was a forced packet of organic pureed bananas and raspberries that had unfortunately gotten hot sitting in a bin under the sun, even though the temperature hadn't risen above 55F. The warmth of it took me by surprise, and not in a good way, and I tried to wash it down with water that was equally warm. I scanned the aid station contents and grabbed for a cup of cold ginger ale, and only realized after it was in my mouth that I'd chugged a cup of coke. Frustrated, I took off again, not feeling particularly satisfied, and with the bottle of lukewarm water. 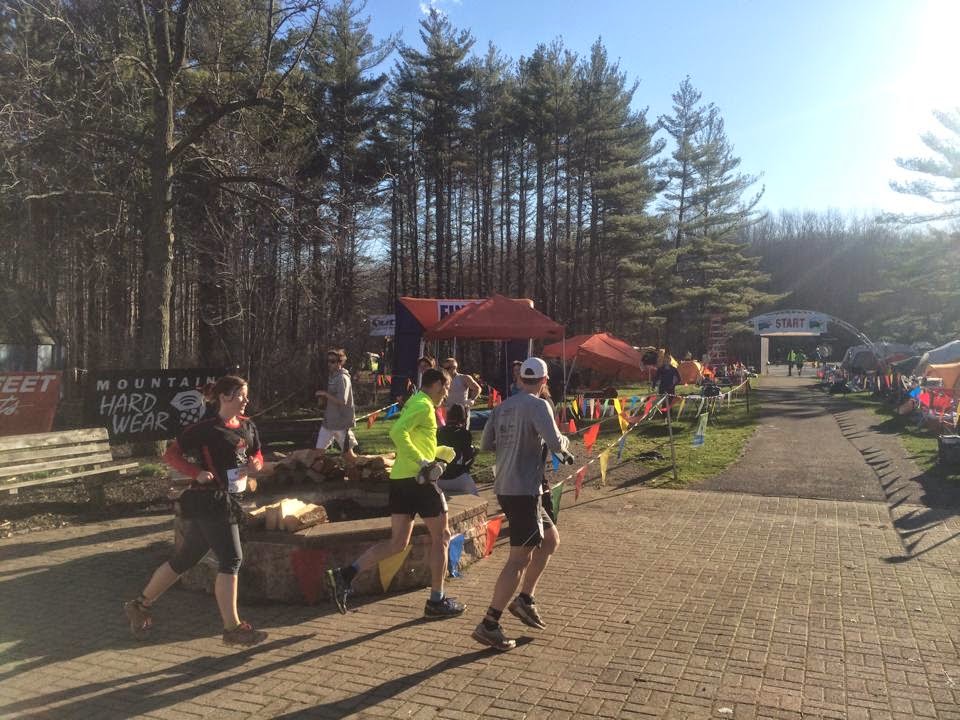 Although I was forcing sips of water a couple times per loop, and downed at least 2 cups of ginger ale between 31 and 45 miles, my stomach was turning on me by the hour, and the forced feedings were getting harder to execute every time. The first time I really realized and admitted I was feeling awful was around mile 48 when I stopped for grilled cheese and Cathy Faye asked what mile I'd completed. "Starting 49", I answered, and without missing a beat continued with, "I'm nauseous; I don't feel good". My pace hadn't particularly suffered, and although I was probably running a bit slower, I was still running the vast majority of the back half of the loop. As I crossed the timing mat at the end of mile 50, the clock indicated 10:24 had lapsed-- not a PR, but faster than I'd covered the same distance the year before. I retreated to my tent for a few minutes to try to regroup, found an unopened bottle of diet pepsi, and drank at least 1/3 of its contents. It surprisingly helped temporarily, and when I left to start my 51st mile, I still felt somewhat hopeful. We were just over 10.5 hours into the race, which meant I still had 13.5 hours to cover the last 50 miles. No matter how sick I felt, a 16 minute pace was possible, even with another retreat or two to my tent.

Things started to unravel within a mile or two. I'd gone to the bathroom at some point between miles 46 and 49 and noticed there was blood in my urine, but tried not to worry too much about it. I figured if I drank more water, everything would be peachy. I'd go on, I'd feel better, and I'd have a valuable lesson about hydration to pass on if ever the subject came up again during a long run. Instead, the struggle just continued to intensify. Muscle cramping commenced and then that cloudy-minded haze that I like to call "The Dumb" where simple, obvious things like a 10 minute break to slow my heart rate, calm my stomach, and drink something cold weren't so obvious anymore. Nothing was obvious. I finished my 62nd mile in a personal record-breaking 13:41, and staggered into the bathroom where rusty-looking urine promised me not another mile was in the cards. The Dumb had evolved into The Panicked Dumb, a state from which there's just kind of no coming back, short of sleep and a good, hot meal. I ran, yes ran, straight to my car where I threw a blanket over myself, drank an entire bottle of water, and proceeded to sleep for over an hour. By the time I'd awaken, "kidney failure" and "permanent damage" were so engrained in my psyche that I felt hopeless. PR or ER had taken on a whole new meaning, and I didn't want to wake up hooked up to an IV with twigs in my hair and a really bad story to tell.

I accepted the medal awarded to 100k finishers, and then slept for 5 more hours in my car, after which I felt fresh, new, and fully capable of running again. It's funny how that works out sometimes: you accept it's over just to find strength after walking away. And, that's how this round about comes back to make its full circle. I walked away with a 100k PR. But, I walked away. I didn't wait. I gave up. Again. 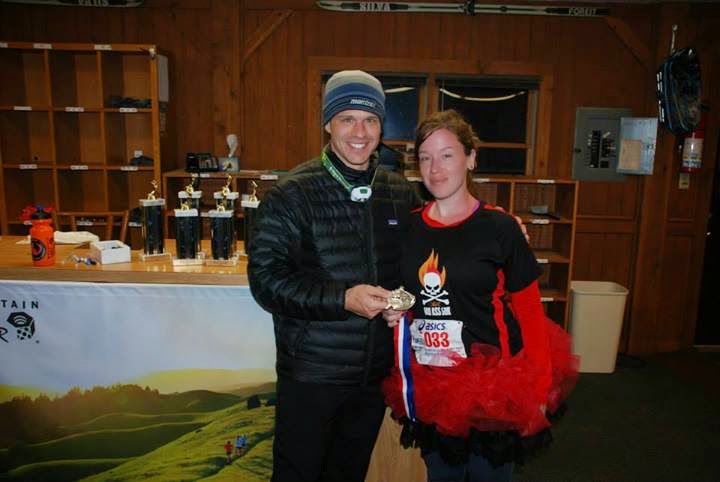 So, here I am, two days later, wondering whether or not it was a mistake to register again for Burning River 100. I've finished it once, albeit barely, but missed every other 100 mile finish by a long shot, usually to the tune of 100k plus a few miles. It makes me wonder whether or not it's worth it to keep putting myself through these grueling, heartbreaking attempts, or if it's better to just stand back and accept that 100k is my forte and the distance I really should be racing. I don't know. But, I've never been one to give up. Eventually, all the pieces are going to fall in place, by pure chance if all else fails.

I really believe this year is going to be the year-- the year really special, really incredible things happen with my ultra running, the year I finish the 100 with more than a few minutes on the clock. I believe there's purpose behind everything, and all of these DNF's, tears, and anguish are finally going to pay off with something big. Posted by Kimberly Durst at 5:19 PM